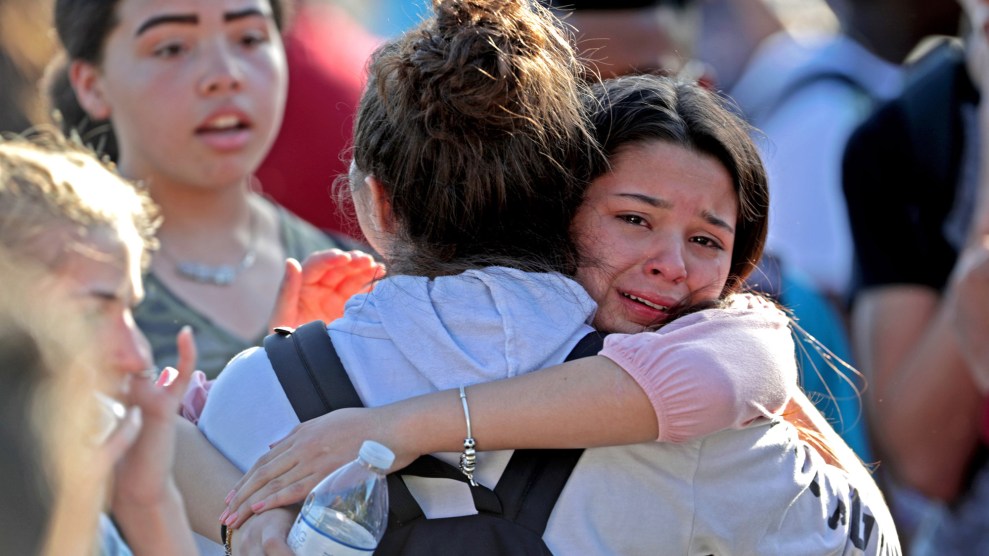 Update 5:16 pm ET: The Leon County Sheriff’s Office told the Tallahassee Democrat on Thursday that they knew of no information linking Cruz and the Republic of Florida, raising doubts about the group leader Jordan Jereb’s claims. “We are still doing some work but we have no known ties between the ROF, Jordan Jereb or the Broward shooter,” Lt. Grady Jordan of the sheriff’s office told the paper. At a Thursday press conference, when asked about Cruz’s ties to a white nationalist group, Broward County Sheriff Scott Israel told reporters that those claims were “not confirmed at this time,” adding that law enforcement is looking into the matter.

Nikolas Cruz, the 19-year-old arrested and charged with killing 17 people at a Florida high school on Valentine’s Day, trained at one point with a white supremacist group, the group’s leader told the Anti-Defamation League on Thursday.

The ADL, an organization that tracks hate groups, contacted Jordan Jereb, who is believed to be the leader of the Republic of Florida, which describes itself as a “white civil rights organization fighting for white identitarian politics” seeking a “white ethnostate.” He told them that Cruz had taken part in at least one of its paramilitary training exercises near Tallahassee, and that he had traveled to the training with other group members from south Florida. Jereb told the Associated Press that Cruz had “acted on his own behalf” when he opened fire at Marjory Stoneman Douglas High School. Authorities arrested Cruz for entering the school he once attended and gunning down 17 people and injuring many others.

Former classmates told the Daily Beast that Cruz wore a “Make America Great Again Hat” at school (Instagram deleted the shooter’s account). The Daily Beast reported that, according to Jereb, a member of his group allegedly purchased a gun for Cruz. “I know he knew full well he was joining a white separatist, paramilitary, proto-fascist organization,” Jereb said. “I know he knew that much.”

The revelation elevates concern about the looming threat of violence from white supremacists, even as funding to combat such threats has been cut at the federal level. Law enforcement officials have told Mother Jones that concerns over violence from far-right extremists have heightened since the violent protests in Charlottesville, Virginia, thanks in part to President Donald Trump’s reaction after the event. As Mother Jones’ Mark Follman has reported, Trump’s response “has been hard to view as anything other than a disaster,” according to a high-level US security official, “There are real concerns about where it leads the country. More of this stuff seems possible.”

Last May, a joint FBI and Department of Homeland Security report determined that white supremacists were more responsible for violent attacks than other domestic extremist groups, a troubling finding at a time when DHS last year has reportedly repurposed its Countering Violent Extremism program to focus exclusively on radical Islamic terrorist threats instead of targeting neo-Nazi groups and other far-right extremist groups. As a former law enforcement official told Mother Jones after Charlottesville:

“This idea they’ve pushed about only focusing on radical Islamic terrorism is foolish and naïve,” a former law enforcement leader based in Virginia told me. During the Obama administration, he said, there was a surge in white supremacist activity, but it was largely threats and not much action. “With Charlottesville,” he said, “especially with the use of the car, there’s worry about more of it going beyond talk.”