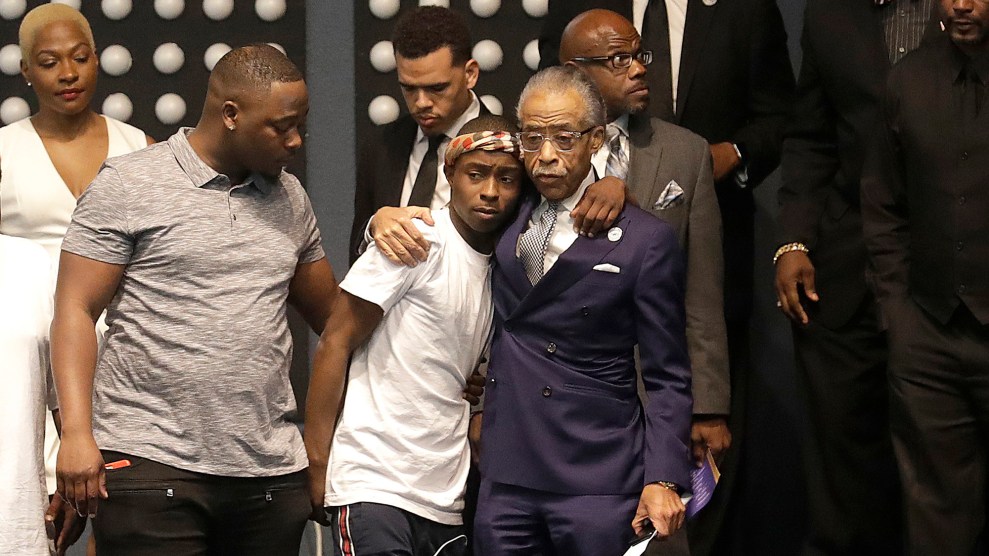 Rev. Al Sharpton hugs Stevante Clark during funeral services for his brother Stephon, who was shot and killed by Sacramento police officers on March 18.Jeff Chiu/AP

Hundreds attended a funeral service Thursday morning for Stephon Clark, the unarmed 23-year-old African American man who was fatally shot by police officers earlier this month in Sacramento, California. Police officials have said the officers believed Clark was holding a gun; a phone was found near Clark’s body. The funeral took place as protests sparked by the March 18 shooting enter their second week. The incident is one of only a handful of police shootings that has drawn national media attention since President Donald Trump took office.

I’m in Sacramento at Stephon Clark’s funeral for @MotherJones. Starts in 20 mins. Hundreds waiting to get in. Even heard an argument about people cutting in line. pic.twitter.com/10OGimnG66

Naz Ali-Prasad, 36, tells me she’s attending Stephon Clark’s funeral to “stand in solidarity with my black brothers and sisters.” She says her 6 year old son could also be treated differently because he is Muslim. pic.twitter.com/klMS1psCeD

The service for Clark, who converted to Islam several years before his death, included elements of traditional Muslim and Christian funerals. The closing prayer was offered by imam Zaid Shakir, who led the funeral service for boxing legend Muhammad Ali in 2016. Civil rights icon Al Sharpton delivered the eulogy.

During his remarks, Sharpton responded to recent comments by White House press secretary Sarah Huckabee Sanders that police shootings of black men such as Clark are a “local matter.” “This is not a local matter,” Sharpton said. “They’ve been killing young black men all over the country, and we are here to say that we’re going to stand with Stephon Clark and the leaders of his family.”

Clark’s brother, Stevante Clark, called up friends and relatives to tell stories about his brother during the service. Their mother told a story about helping Clark with his homework as a child. A friend spoke of how dedicated Clark was to his two children, one- and three-year-old boys. Clark was engaged to his longtime girlfriend.

Clark was killed on March 18 by two Sacramento police officers responding to a call about a man breaking into cars. Body camera videos of the encounter showed the officers shot at Clark 20 times within seconds of encountering him in his grandparents’ backyard. It’s unclear how many times Clark was hit; the coroner has said she won’t release the autopsy results until the case has been resolved. Another imam who also spoke at the funeral tweeted on Wednesday that Clark’s body “was in such bad shape” that his family was unable to wash it, as is called for by Muslim burial custom.

#StephonClark was massacred. His body was in such bad shape that we couldn’t do the ritual washing (ghusl).

The brothers did a substitute ritual (tayammum) and are horrified by the sight.

We cannot allow this to keep happening.

A protest organized by the Sacramento chapter of Black Lives Matter is scheduled to take place this afternoon outside the Sacramento County district attorney’s office. Activists are calling on the DA to file criminal charges against the officers who shot Clark. Local law enforcement authorities have said they are preparing for protesters to attempt to block the entrances to the arena where the Sacramento Kings will play this evening. Protesters have already twice blocked the entrances, preventing hundreds of fans from watching the games and forcing the NBA team to play in a nearly empty arena.