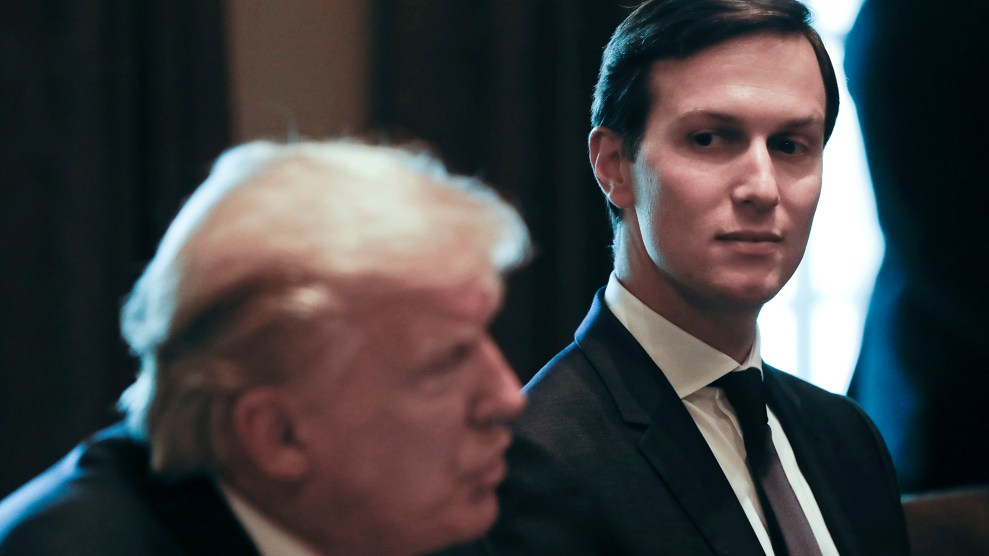 Jared Kushner is pushing for a bill, sponsored by Reps. Doug Collins (R-Ga.) and Hakeem Jeffries (D-N.Y.), to reform the federal prison system. Next week, the House Judiciary Committee is poised to vote on the legislation, which would try to help prisoners get back on their feet after their sentences by encouraging them to participate in vocational training and other rehabilitative programs behind bars.

As it stands, Kushner faces an uphill battle to get the legislation to President Donald Trump’s desk. Even if the bill passes in the House, it will likely run up against bipartisan opposition in the Senate—Democratic Whip Dick Durbin (Ill.) and Senate Judiciary Committee Chairman Chuck Grassley (R-Iowa) have criticized the proposal for not including sentencing reform, which they argue is crucial to tackle prison overcrowding and long wait lists for rehabilitative programs. Grassley’s own bill, the Sentencing Reform and Corrections Act, which would tackle mandatory minimum sentencing, made it out of committee but is currently stalled amid pushback from Attorney General Jeff Sessions, who has described it as a “grave error” that would allow “highly dangerous…criminals” to leave prison sooner.

Kushner, whose billionaire father was once incarcerated for tax evasion and illegal campaign contributions, has urged lawmakers to do what they can now with prison reform and focus on sentencing reform later. “The continued debate on sentencing should not impede the immediate progress the federal government can make to give prisoners a better shot at a successful life,” he wrote recently. And Trump has expressed support for his son-in-law’s initiative, pledging during the State of the Union address to help more inmates get a second chance. In March, he signed an executive order that gave Kushner power over a Cabinet-level council that aims to improve reentry programs.

It’s hard to deny that inmates could use more opportunities to study and pick up work skills: According to Kara Gotsch of the Sentencing Project, the wait list for the GED program in federal prisons is currently at 15,000 people, despite strong evidence that access to educational programs can greatly reduce a person’s odds of recidivating. But while prison reform advocates are glad to see Congress focus on rehabilitation, many have come out hard against the Kushner-backed bill. In a letter to the House Judiciary Committee last month, dozens of civil rights groups described the legislation as “an empty promise” that would likely be “doomed to fail.”

It’s not just the lack of sentencing reform that concerns them; they argue the bill is impractical, too. For starters, it would reward inmates who participate in rehabilitative programs by allowing them to accrue so-called earned-time credits, which would permit them to spend more of their sentence in a halfway house or home confinement before transitioning back into the community. That sounds good in theory, but halfway houses don’t currently have enough beds to accommodate the number of inmates who should have access to them—a situation made worse last summer, when the Bureau of Prisons decided not to renew contracts with at least 16 halfway house providers, causing some of those facilities to shutter.

Another concern is that the bill doesn’t allow all inmates to cash in on earned-time credits accrued through rehabilitative programming. Prisoners convicted of a range of crimes, including certain drug offenses, would not be eligible—though drug crimes account for nearly half the total federal prison population. Inmates who are deemed to have a high risk of recidivating could also be prevented from using their credit to reduce their time in prison, says Gotsch: “The people who really need the programming won’t be able to cash in,” which might make them less likely to participate. She adds that a new version of the bill, not yet introduced, would allow high-risk inmates to cash in credits if they get approval from a warden and Bureau of Prison officials.

There may also be problems with the system by which inmates would be designated as high risk. The bill instructs the Bureau of Prisons to use a risk assessment tool to determine prisoners’ chances of recidivating—an approach that has never been tested, says Gotsch. (More commonly, risk assessment tools are used to help estimate inmates’ security risk inside a prison, to determine whether they should be housed in medium- or high-security facilities.) “Research shows that risk assessments often do not accurately predict risk,” the civil rights groups wrote in their letter to the House Judiciary Committee, and “that these tools can produce results that are heavily biased against Black defendants.”

But the bill’s biggest flaw is more simple: It seeks to encourage more participation in rehabilitative programs, but the Bureau of Prisons doesn’t have enough rehabilitative programs to begin with, notes Sakira Cook, senior counsel at the Leadership Conference on Civil and Human Rights, which also signed the letter to the Judiciary Committee. One of the bureau’s main rehabilitative programs, the Residential Drug Abuse Program, has a massive waiting list—51,000 inmates were reportedly waiting to access the program in 2012, according to data from the Government Accountability Office. And many facilities don’t have enough staffers to run additional programs, says Jesselyn McCurdy at the American Civil Liberties Union: Wardens regularly require teachers at federal prisons to postpone or cancel their classes so they can fill empty slots for correctional guards in the housing units. This year, the Bureau of Prisons is poised for further staff cuts. “The whole concept of this bill is not based in the reality of what is going on in the Bureau of Prisons at the moment,” says McCurdy.

The bill would authorize $50 million to help create more rehabilitative programs for inmates. But that funding “just scratches of the surface” of what’s needed, says Gotsch, who points out that there’s no guarantee this authorized amount would ever be appropriated by Congress. She adds that the Bureau of Prisons could save millions of dollars each year by allowing inmates to earn slightly more “good-time credit,” which is distinct from earned-time credit and actually allows a person to shave time off their sentence. In their letter, the civil rights groups urged lawmakers to reward inmates who participate in rehabilitative programming with more good-time credits, rather than with earned-time credit for halfway houses that can’t accommodate them.

The ACLU, the Sentencing Project, and others predict that if Congress doesn’t pass a more comprehensive bill—one that deals not only with rehabilitation, but also with sentencing, understaffing, solitary confinement, and a host of other concerns—it will likely be many years before these issues are addressed on Capitol Hill. “Criminal justice reform is not something that happens very often at the federal level,” says Gotsch, noting that the last major bill on the subject, the Fair Sentencing Act, was passed about eight years ago.

“While we share the goal of reforming the federal prison system,” wrote the groups in their letter to lawmakers, “the provisions of this bill, as written, do not promise real prison reform.”

This story has been updated to reflect a new version of the bill that was circulating on Monday.