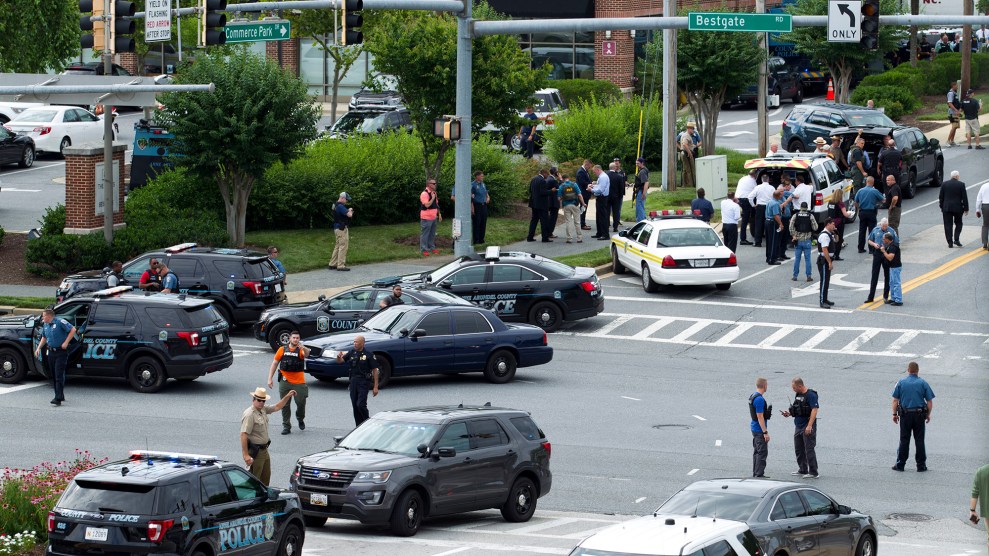 Police officers respond to Thursday's shooting at the offices of the Capital Gazette.Jose Luis Magana/AP

Update, 8:20 pm ET: In a scheduled press conference Thursday evening, Acting Anne Arundel County Police Chief William Krampf confirmed that the shooting was a “targeted attack” on the Capital Gazette. The shooter was a white man in his 30s, who also used canisters of smoke grenades—not explosive devices, as previously reported—when he entered the building. “This person was prepared to shoot people, and his intent was to cause harm,” Krampf said.

At least five people were killed and several others injured Thursday afternoon when a gunman opened fire at the offices of the Capital Gazette newspaper in Annapolis, Maryland, according to Anne Arundel officials. One individual has been taken into custody and is being questioned by law enforcement.

At a press conference following the shooting, Anne Arundel County Executive Steven Schuh characterized the investigation “as active and ongoing.” Members of Anne Arundel County law enforcement subsequently told reporters that a long gun had been used in the shooting and that investigators recovered what appeared to be an explosive device from the scene. One hundred seventy people were safely evacuated from the building, which houses several businesses in addition to the newspaper.

An intern with the newspaper announced the shooter’s presence and called for help over Twitter at 2:43 p.m. Phil Davis, a courts and crime reporter for the newspaper, said a gunman shot through a glass door to the office and “opened fire on multiple employees.”

Gunman shot through the glass door to the office and opened fire on multiple employees. Can't say much more and don't want to declare anyone dead, but it's bad.

On Thursday evening, Jimmy DeButts, the Capital Gazette‘s community news editor, requested that people “stop asking for information/interviews” and added that the newspaper’s “reporters & editors give all they have every day” and have “a passion for telling stories from our community.”

Devastated & heartbroken. Numb. Please stop asking for information/interviews. I’m in no position to speak, just know @capgaznews reporters & editors give all they have every day. There are no 40 hour weeks, no big paydays – just a passion for telling stories from our communty.

The Capital Gazette is owned by the Baltimore Sun. Police were dispatched to the Sun newsroom in Baltimore after the shooting, but the Sun reports that the police presence there was just a precaution.

A spokesperson for the New York Police Department told Mother Jones that officers have been dispatched to major media outlets around New York out of an “abundance of caution.” He said there are no credible threats to any of the newsrooms there at this time.

Prior to departing Wisconsin, I was briefed on the shooting at Capital Gazette in Annapolis, Maryland. My thoughts and prayers are with the victims and their families. Thank you to all of the First Responders who are currently on the scene.

This is a breaking news story. We will update this as more information becomes available.