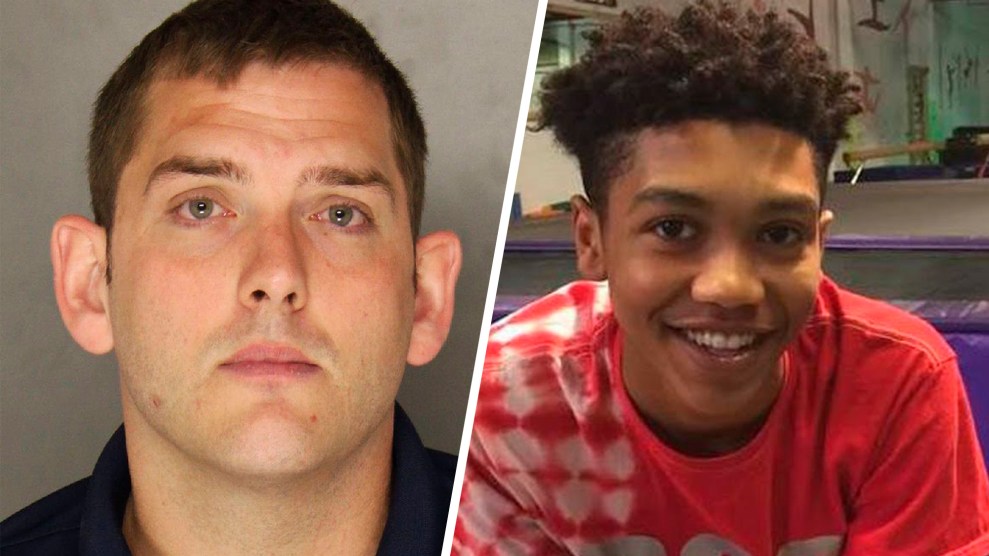 The Pennsylvania police officer who shot and killed an unarmed black teenager, Antwon Rose, in a Pittsburgh suburb last week has been charged with criminal homicide, Allegheny County District Attorney Stephen Zappala said at a press conference on Wednesday, an umbrella charge that allows prosecutors to ask a jury to consider charges ranging from manslaughter to first-degree murder. But during the back and forth about Officer Michael Rosfeld’s conduct, Zappala made a stunning assertion: He said the East Pittsburgh Police Department has no established protocol—none—governing the conduct of its officers: “I’m going to raise it with the US attorney.”

Rosfeld, 30, shot and killed Rose after the 17-year-old ran away from a traffic stop on June 20. He had stopped the car Rose was riding in, which police suspected may have been involved in an earlier shooting, an apparent drive-by. As Rosfeld detained the driver, Rose and an acquaintance fled the vehicle. The officer fired his service weapon, striking Rose three times, Zappala said—in the cheek, the right elbow, and the torso.

Investigators asked, “‘Well how do you handle these situations? What’s your policy?’ And [the police] said, ‘We don’t have a policy.'”

The car was, in fact, involved in the earlier shooting, he added—but Rose was not, and the boy was unarmed when he ran away. (Two guns were found in the car, however.) The second fleeing passenger, who was detained and charged on Monday, is the suspected shooter, Zappala said. According to Lee Merritt, an attorney for Rose’s family, the driver is Rose’s cousin, and had offered the others a ride. But the driver insisted to police that he was not involved in the earlier shooting—he was released the same day without charges.

The East Pittsburgh Police, meanwhile, apparently had nothing in place to dictate how Rosfeld should have behaved. “When they first came on scene,” Zappala said, the major crimes investigators asked, “‘Well how do you handle these situations? What’s your policy?’ And they said, ‘We don’t have a policy.'” Asked by a reporter to clarify what, exactly, the department didn’t have a policy for, Zappala said, “for anything, as far as we know.”

“That’s a very dangerous situation,” he added, and the lack of police protocol could leave the city on the hook in a wrongful death lawsuit.

Jim Bueerman, president of the Police Foundation, a police policy and reform group, says he thinks it’s unlikely the department has no policies whatsoever governing the comportment of officers on the job. “I would be very surprised,” he says. “You can’t even operate a police department without a set of common understandings and expectations about how we’re going to do business.” More likely, Bueerman says, is that the policies the department does have, especially on crucial issues like use of force, are woefully inadequate.

But as far as Merritt can tell, the department, indeed, has no policies at all, at least not as it relates to officers’ interactions with civilians. “The first thing that we did when we got involved in the case is we wanted to see what their standard operating procedures said about fleeing suspects,” he says. “In order to bring a civil case, we would have to show against the officer and against the jurisdiction that their protocol in and of itself violates the Constitution.”

But when he approached the department, it couldn’t produce any policy. “What that means,” he says, “is that it’s the wild, wild west.” (The East Pittsburgh Police Department did not respond to inquiries for this story.)

The lack of coherent police policy creates a “combustible situation for both the community and for the cops themselves.”

Bueerman says that having a policy manual, at the most basic level, is necessary so officers know what they can and cannot do. “The overarching rationale is to give guidance about what is right and wrong in terms of their behavior,” he says. “It’s giving them guidance about community, city, and departmental expectations. If you don’t have any policies, then in theory almost any behavior through the lens of the department is acceptable because there’s nothing that says, ‘You can’t do this.'”

He adds: “Policy establishes the nature of the training. If you don’t have those two pieces together, then you have a combustible situation for both the community and for the cops themselves.”

The East Pittsburgh force is tiny—just eight officers, Merritt says. According to Bueerman, departments that small often don’t have resources or expertise to develop and maintain their own policy manuals.  Instead, they buy ready-made ones from for-profit companies such as Lexipol. But financial constraints may prevent them from being able to afford such manuals or sign a long-term contract to maintain one. About half of the nation’s approximately 18,000 police departments have fewer than 10 officers, Bueerman says.

But there are simpler solutions, Bueerman says, such as adopting policies developed by police groups like the International Association of Chiefs of Police. The Allegheny County Chiefs of Police Association also recommends best practices for county departments, Zappala said, though it has no authority to compel departments to comply.

“Worst case scenario, you pick up the phone and you call one of your friends in another department and say, ‘Can I get a copy of your policy manual?'” Bueerman says. “If you can’t afford to do this the way you should, then you probably have no business having your own police department.”

Rosfeld joined the East Pittsburgh force in May. He was sworn in only hours before his encounter with Rose, although he had spent several years as an officer with the University of Pittsburgh Police Department and as a part-time officer with another force. Merritt says two officers at the University of Pittsburgh confirmed to him that Rosfeld, who is white, had parted ways from the university after an incident in which he became violent with a black student—whose parent happened to be the school’s vice chancellor. Rosfeld left the department in January, according to the Pittsburgh Post-Gazette.

Merritt said he believes East Pittsburgh’s apparent lack of sufficient police policies shows “negligence,” and that he’ll raise the issue in a civil suit the family intends to file against the city. “Most cities have a risk management function somehow—either a city attorney or a city manager or their insurance company,” Bueerman says. “Any of those entities, I think, would be malfeasant in not demanding that the department have a set of policies.”