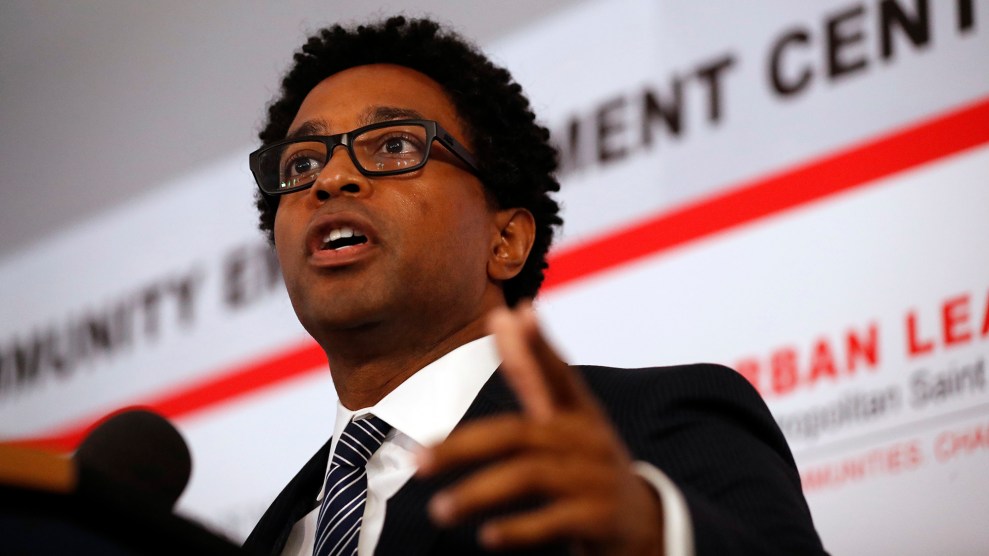 Nearly four years to the day after a white police officer in Ferguson, Missouri, shot an unarmed black teenager named Michael Brown, voters in the state’s primary election on Tuesday ousted the long-standing county prosecutor who faced fierce criticism for his handling of the case.

Robert McCulloch, 67, who has been the St. Louis county prosecutor for almost three decades, failed to indict the officer who killed Brown in 2014, an incident that sparked widespread protests and galvanized a national conversation about police brutality against people of color. His opponent in the primary, Wesley Bell, is a 43-year-old Ferguson city councilman and former public defender, prosecutor, and judge who helped push police accountability and court reforms in Ferguson after Brown’s killing, and who campaigned on a progressive platform of ending cash bail for nonviolent offenses and fighting mass incarceration.

Bell pledged during the campaign to recuse himself in cases involving police shootings, noting that prosecutors often have close relationships with police officers they work with.

With 89 percent of ballots counted, Bell declared victory late Tuesday night, with 55 percent of the vote over McCulloch’s 45 percent. Both are Democrats. No Republicans were on the ballot for the primary race, so Bell will run unopposed in the general election in November.

Much of the campaign centered on the aftermath of Brown’s killing. The son of a police officer, McCulloch, who is white, came under criticism when he declined to recuse himself from the case; critics argued he was biased because his father was killed by a black suspect when he was a kid. He also faced backlash over the grand jury process, after he flooded jurors with documents and testimony but did not recommend whether to indict Officer Darren Wilson.

Bell, who is black, is also the son of a cop. He pledged during the campaign to recuse himself in cases involving police shootings, noting that prosecutors often have close relationships with police officers they work with. “It was completely inappropriate for him to handle that case,” he told the New York Times of McCulloch. McCulloch has defended his decision not to recuse himself and said during the campaign that he remains committed to helping crime victims, noting that too many are black men. “That’s something that people should be out protesting,” he told the Associated Press.

Bell’s reform-minded platform won him the support of national progressive groups like Color of Change and Shaun King’s Real Justice PAC, which criticized McCulloch’s use of drug-war tactics and his history of sending defendants to death row, along with his track record on police shooting cases. After Brown’s death, when McCulloch ran unopposed for reelection in 2014, some 11,000 voters opted to enter the name of someone else on the ballot. But Bell was an underdog in the primary race, trailing far behind in fundraising, and McCulloch insisted that he lacked enough know-how for the position. “The public has the confidence in the job I’ve done,” McCulloch said during a candidate forum last month. “It takes experience. It takes knowledge.”

Since becoming St. Louis’ top prosecutor in 1991, McCulloch has only faced three challengers in reelection bids, and Bell was the first since Brown’s shooting. As my colleague Brandon Patterson has reported, that’s not uncommon: Eighty-five percent of district attorney incumbents nationally run unopposed for reelection. But it’s beginning to change. Progressive groups, pointing out that prosecutors have enormous power in the criminal justice system, are increasingly channeling funds into the campaigns of reformist candidates like Bell and District Attorney Larry Krasner in Philadelphia.