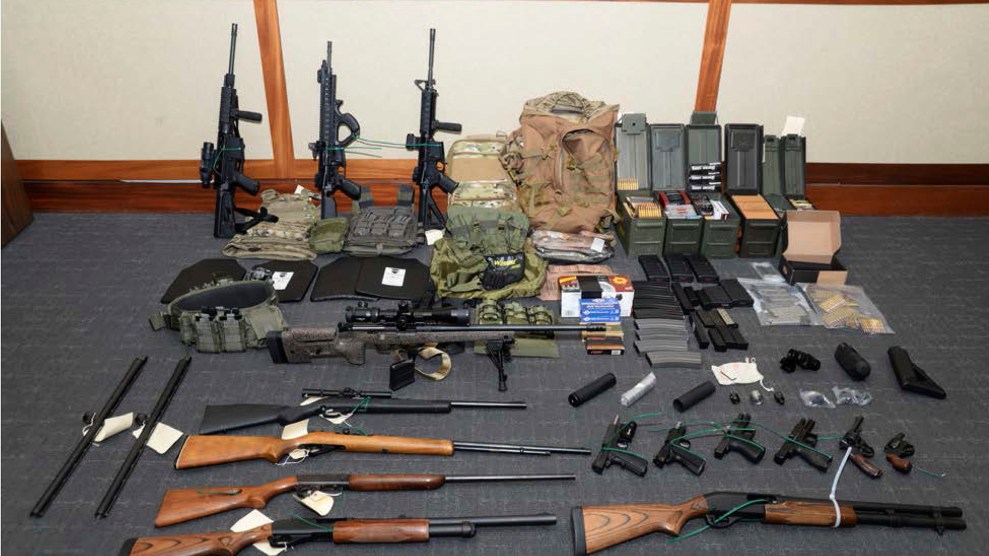 A photo of firearms and ammunition that was included in the motion for detention pending trial in the case against Christopher HassonUS District Court via AP, File

A federal judge on Thursday announced that Christopher Hasson, a US Coast Guard lieutenant accused of plotting to kill politicians and journalists, may be released from jail ahead of his trial. US District Judge Charles B. Day said that while he had “grave concerns” about Hasson, a 50-year-old white supremacist from Maryland who had been stockpiling weapons for at least a decade, he could not fairly deny bond because Hasson had only been charged with gun and drug offenses and not a crime like terrorism.

Given the scope of Hasson’s plotting, his case has reopened a debate about why it’s difficult to prosecute violent white supremacist schemes as terrorism. Federal prosecutors say Hasson, who was arrested in February, had been planning to “murder innocent civilians on a scale rarely seen in this country”; his hit list included prominent Democratic officials like House Speaker Nancy Pelosi, Rep. Alexandria Ocasio-Cortez, and Sens. Elizabeth Warren, Cory Booker, Kamala Harris, and Chuck Schumer, along with journalists like MSNBC host Joe Scarborough and CNN’s Don Lemon. He allegedly wrote that he wanted to establish “a white homeland,” and he searched online for the “best” gun to kill black people and the home addresses of two Supreme Court justices. He’d been reading the manifesto of Anders Breivik, who murdered dozens of people in Norway in 2011.

Hasson had been planning to “murder innocent civilians on a scale rarely seen in this country.”

Prosecutors have described Hasson as a “domestic terrorist,” but they’ve only charged him with possession of unregistered and unmarked silencers, possession of 15 firearms by an unlawful user or a drug addict, and simple possession of a controlled substance. As a result, Judge Day said pretrial detention would not be appropriate, and that he would convene a later hearing to discuss a strict supervision arrangement for Hasson, likely including electronic monitoring and other conditions. Until then, Hasson remains in jail. “We have got to have someone who has eyes and ears on him like nobody’s business,” the judge said, according to the Washington Post.

Why hasn’t Hasson been charged as a terrorist? In part, it’s because US terrorism laws make it harder to convict for certain acts of violence if they are motivated by white supremacy.

There are about 50 terrorism statutes that can be used to prosecute far-right domestic terrorists, including for things like using a bomb, which can be characterized as a weapon of mass destruction, or for attacking a government official. But these statutes don’t apply to Hasson, partly because he hadn’t committed any violence yet, and partly because of the type of weapons he favored: According to Mary McCord, a longtime federal prosecutor who was formerly deputy assistant attorney general for national security at the Justice Department, there’s no terrorism statute that applies to someone who uses a firearm or a vehicle to commit violence motivated by white supremacy. For crimes involving these weapons, however, it is possible to convict if the perpetrator was motivated by a connection to an international extremist group. “If I’m the San Bernardino shooter, or if I’m Omar Mateen at Pulse nightclub and I commit my crime with a firearm, I’ve done it on behalf of ISIS, so I can be charged with material support to a terrorist organization,” she says. “If I do the same as a white supremacist”—think Pittsburgh synagogue shooter Robert Bowers or James Field, who used a vehicle to kill in Charlottesville, Virginia—”there’s no terrorism crime I can be charged with…There ends up being a gap.”

Some experts argue it’s time to close this loophole. “Our outdated laws, or complete lack thereof in the domestic terrorism space, have created a double standard,” says Jason M. Blazakis, director of the Center on Terrorism, Extremism, and Counterterrorism at the Middlebury Institute. Whether white supremacy or jihad are the motivating factor behind an attack, adds McCord, acts of violence that are intended to scare people should be treated on the same moral plane. Creating a terrorist statute to this effect, she argues, would lead federal law enforcement to devote more resources to investigating far-right extremist violence, ideally to prevent it from happening so much in the first place. “If you’re using violence as a way to intimidate or coerce, then that should just be called terrorism period,” she says.

“People might be unhappy it’s not labeled terrorism, but that doesn’t make a difference in how much jail time someone gets.”

Others argue it’s not necessary to expand terrorism laws because our existing federal statutes are broad enough. “There are plenty of other criminal statutes that you can charge someone with,” points out Michael German, a former special agent with the FBI who specialized in domestic terrorism and now works as a fellow at the Brennan Center for Justice. Even if they can’t be charged with terrorism, people like Robert Bowers or James Field can be convicted of federal hate crimes, which can also bring lengthy sentences. (Field pleaded guilty to hate crime charges in March, and Bowers, who was indicted on dozens of charges including hate crimes, has pleaded not guilty, but his case continues. Hasson is not accused of hate crimes.) They can also be charged with other crimes like murder, or with conspiracy. “People might be unhappy it’s not labeled terrorism,” adds Ken White, a criminal defense attorney at Brown White & Osborn and a former federal prosecutor, “but that doesn’t make a difference in how much jail time someone gets.”

German says the Justice Department has long deprioritized far-right violence. He worries that if domestic terrorism statutes were expanded, federal law enforcement might use them to further target other groups: “They have used domestic terrorism prevention aggressively against environmentalists who have not committed acts of violence, against groups that are protesting police violence, groups that are protesting pipelines.”

In Hasson’s case, one wrinkle is that he was acting alone and hadn’t actually committed violence yet. “There are relatively few laws of any sort to deal with someone who is a just a lone misfit who is maybe thinking about doing something but hasn’t done it yet,” says White. “If he’s just fantasizing about doing it and buying guns, there’s no conspiracy, and if it’s not far enough to go to an attempt, then they can only get him on the weapons charges.”

Given the public safety concerns, Hasson hasn’t been released yet; defense attorneys will need to come up with supervision conditions that Judge Day deems acceptable. The US attorney’s office for Maryland has said it plans to “oppose any conditions of release,” and that it will appeal if Day does decide to let Hasson out of jail. Prosecutors argue that Hasson poses too much of a threat, but German isn’t convinced. “If he was dangerous because of his ideas and his access to weapons, how come he hasn’t done anything over these decades?” he says. “And what makes him dangerous today more than yesterday?”

“The necessity to lock people up pretrial needs to be supported by strong evidence,” he adds. “The real issue isn’t so much why this particular individual is being released on pretrial bond, but why more people aren’t.”

Whether he remains in jail or not, Hasson’s case will likely continue to fuel conversation about US terrorist statutes and whether they let too many far-right extremists off the hook. White suggests existing laws are broad enough to bring people to justice, and that even if Hasson were plotting jihad, it’s unclear if his case could have been prosecuted in a different way.

Not everyone agrees. “If Hasson were a Muslim,” says Blazakis, “I do think we would see justice play out differently.”