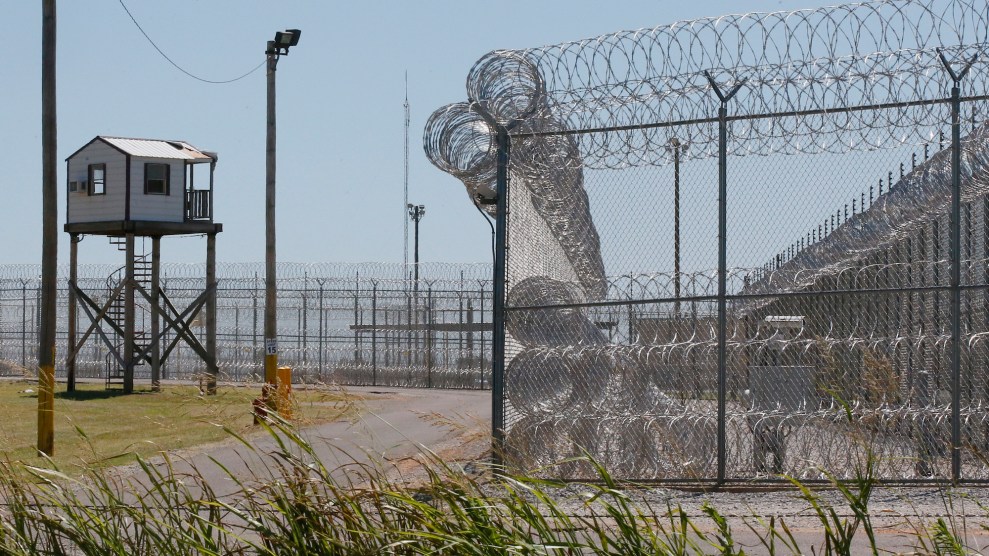 Last year, Oklahoma edged out Louisiana for the dubious honor of being the “world’s prison capital”—locking up a higher proportion of its residents than any other state or country. Since then, lawmakers and businesspeople from both parties have taken up the cause of reforming their state’s criminal justice system. Oklahoma’s prison chief has called for major changes to sentencing laws. Recently elected Republican Gov. Kevin Stitt campaigned on a promise to reduce the prison population: “Right now, we’re incarcerating people we’re mad at. We’re not really afraid of them,” he told the Associated Press during his campaign.

Yet as this year’s legislative session comes to a close, only one major criminal justice reform bill ever crossed the governor’s desk: A measure that would allow some low-level drug offenders to be released from prison and clear their records. The law, which Stitt signed Tuesday, could free an estimated 1,000 inmates but will barely make a dent in the state’s prison system, which holds 1,079 in every 100,000 Oklahomans, according to the Prison Policy Initiative. (Oklahoma is also the nation’s top incarcerator of women.) The state’s prison population is expected grow by 14 percent over the next decade, according to an analysis by FWD.us, an immigration and criminal justice reform advocacy group co-founded by Facebook CEO Mark Zuckerberg.

Oklahoma’s incarceration rate has been climbing steadily since the 1980s, driven by “tough on crime” policies. The state’s three-strikes laws, though partially repealed in 2015, still require life sentences for some people convicted of three drug trafficking felonies. Under truth-in-sentencing measures passed in response to incentives in the sweeping 1994 federal crime bill championed by then-Sen. Joe Biden (D-Del.), many prisoners are required to serve at least 85 percent of their sentences, regardless of good behavior or participation in rehabilitative programs.

Meanwhile, the state court system hands out unusually long sentences to people convicted of drug and nonviolent offenses, even if they have no previous criminal history. According to the American Civil Liberties Union, nearly 1 in 5 Oklahoma prisoners was locked up for drug possession as of 2015. The corrections system is overcrowded and relies heavily on private prisons.

Louisiana used to have the top incarceration rate—until last year, when a 2017 package of criminal justice reforms reduced the state’s prison population by 7.6 percent within months of passing. Oklahoma had a chance to make similar legislative changes this year: Lawmakers proposed more than a dozen bills aimed at fixing aspects of the state’s criminal justice system. The most ambitious bills would have shortened drug sentences, limited the use of cash bail, eased the reentry process for former prisoners, and reduced the use of lengthy terms for people repeatedly convicted of nonviolent crimes. Oklahomans for Criminal Justice Reform, a nonprofit led by the former Republican speaker of the state House, estimated that the bills would have cut the state’s prison population by 17 percent within a decade.

Despite bipartisan support for the measures, prosecutors in the state were reluctant to get behind them. Lobbying by law enforcement officials and bail bond companies derailed the bail-reform bill, which would have allowed judges to release low-level criminal defendants from jail even if they could not afford bail.

The only successful major bill, HB 1269, expanded a 2016 state ballot measure that reclassified simple drug possession and minor theft as misdemeanors. The proposition eliminated prison sentences for people convicted only of drug possession for personal use, but it did not apply retroactively. The new law signed by Stitt on Tuesday fixes that. The state’s Pardon and Parole Board is expected to start commuting sentences for nearly 1,000 people serving time for reclassified misdemeanors later this year, according to the Oklahoma Policy Institute. And for an estimated 60,000 people who have drug felonies on their record, the law provides a way to get their records expunged and avoid being put back behind bars if they violate the terms of their release.

But without a more comprehensive package of reforms, criminal justice advocates aren’t cheering yet. “Many more Oklahomans held onto a chance they too would be able to access a more just criminal legal system only to watch their legislature fall short,” ACLU Oklahoma policy and advocacy director Nicole McAfee said in a statement. “Oklahomans are, again, forced to wait another year for the chance to adopt these and other meaningful reforms.” FWD.us put out a similarly lukewarm response: “Polling, ballot votes, the media, and the rally cries from a diverse cross-section of community leaders all made clear that Oklahomans strongly support criminal justice reform. Unfortunately, the legislature failed to heed their call.”