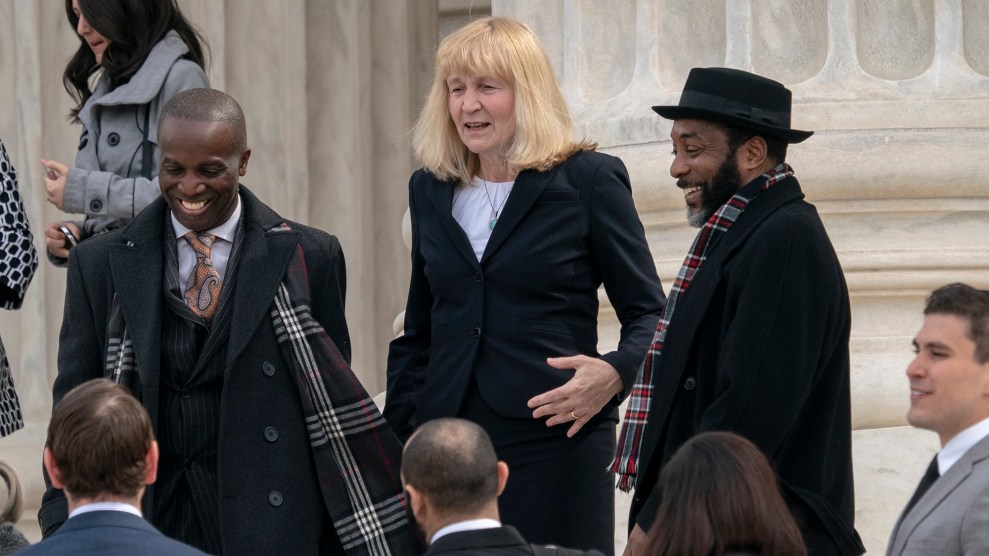 The Supreme Court on Friday overturned the conviction of Curtis Flowers, a black man on death row in Mississippi, and found that the prosecutor who tried the case violated the Constitution by striking so many black jurors during one of Flowers’ trials.

The case was unusual: It involved six trials and multiple instances of prosecutorial misconduct. But the decision could still affect the way lower courts view the issue of racial bias in jury selection in future cases—by clarifying the factors that judges can consider when deciding whether discrimination was at play.

“Other than voting, serving on a jury is the most substantial opportunity that most citizens have to participate in the democratic process,” Justice Brett Kavanaugh wrote for the majority in the 7-2 opinion. (As the New York Times points out, Kavanaugh has long been interested in the issue of bias in jury selection and authored a law review article on the subject at Yale.)

The basic rules for jury selection are as follows: When preparing for a trial, prosecutors and defense attorneys are allowed to strike a certain number of potential jurors without explaining a reason, using what’s known as a “peremptory challenge.” But according to 1986 Supreme Court case called Batson v. Kentucky, a strike is unconstitutional if it is motivated by race. If the defense suspects race was a factor for the prosecutor’s decision, the prosecutor must provide another justification for the strike.

In 1997, Flowers was indicted for the murder of four employees at a furniture shop where he used to work, though he maintains he is innocent. Over the next 13 years, he was tried a staggering six times by District Attorney Doug Evans, who struck 41 of the 42 potential black jurors he was allowed to strike. The first three trials ended in conviction but were later thrown out because of prosecutorial misconduct, and the next two ended in a mistrial because the jurors couldn’t come to a decision. Flowers was ultimately sentenced to death in 2010 by a jury composed of 11 white members and one black member, after Evans struck five potential black jurors from the lineup.

“The State’s relentless, determined effort to rid the jury of black individuals strongly suggests that the State wanted to try Flowers before a jury with as few black jurors as possible.”

“The State’s relentless, determined effort to rid the jury of black individuals strongly suggests that the State wanted to try Flowers before a jury with as few black jurors as possible, and ideally before an all-white jury,” Kavanaugh wrote.

Flowers, who is being held at Parchman prison, learned about the Supreme Court ruling from his lawyer and quickly called his dad, Archie, to celebrate the news, according to reporters for American Public Media who investigated his case for a season of the podcast In the Dark. After the decision came down, they also found District Attorney Evans, who was eating lunch at a Mexican restaurant in a town southeast of Winona, where the murders took place. “There’s no question about [Flowers’] guilt. There never has been,” Evans said. He denied that he had attempted to exclude black people from the jury because of their race. “Courts are just like me and you. Everybody’s got opinions.”

In Flowers’ case, Evans argued there were valid reasons for nixing so many black jurors, such as their relationship to the Flowers family or witnesses. The Supreme Court was not convinced. Given Evans’ history of striking so many black jurors during the first five trials, Kavanaugh wrote, it seemed likely he was motivated by race during the sixth trial. The prosecutor also asked many more questions of black potential jurors than white ones—an average of 29 each, compared with one for white jurors who were seated—making it easier to come up with reasons to exclude them. “In reaching that conclusion, we break no new legal ground,” Kavanaugh wrote. “We simply enforce and reinforce Batson by applying it to the extraordinary facts of this case.”

“There aren’t going to be many cases with stronger facts than this,” says Ronald Wright, a professor and former Justice Department attorney who has studied the issue of racial bias in jury selection. “The number of trials, the number of exclusions: There’s just layer after layer of evidence here that really supports a finding of racial discriminatory intent.”

The court emphasized that Flowers’ case was “likely one of a kind,” as Justice Samuel Alito wrote in a concurring opinion. For that reason, it’s unclear how many other defendants will benefit from it. But Wright believes some elements of the decision are particularly noteworthy and may have ripple effects for other cases. First, the court explicitly said it’s important to consider an attorney’s pattern of juror strikes over multiple trials, something that has only been implied in previous decisions. And it said courts should consider whether an attorney justified a juror strike for reasons that were factually inaccurate or not relevant to the case. In the sixth trial, for example, Evans nixed one black woman from the juror pool because he said she had worked with Flowers’ sister, which was not true, and because she had debt with the furniture store where the murders took place, even though she paid it off earlier. “In the past, the Court has said, ‘Look, we’re not going to get into whether the reason makes any sense,” Wright says. “This time the Court said, ‘That’s pretty odd and far-fetched, and that’s another reason to think it might be a cover for race discrimination.”

“It may be that some future defendants will get relief from an appellate court that couldn’t have gotten it before this case,” he continued.

Justices Clarence Thomas and Neil Gorsuch dissented. “Today’s decision distorts the record of this case, eviscerates our standard of review, and vacates four murder convictions because the state struck a juror who would have been stricken by any competent attorney,” Thomas wrote, arguing that the Supreme Court should abandon the Batson ruling altogether.

“If the court’s opinion today has a redeeming quality,” he added, “it is this: The state is perfectly free to convict Curtis Flowers again.”

It’s up to Evans to decide whether to bring Flowers to trial a seventh time. For now, Flowers will remain incarcerated and will likely be moved to a county jail near Winona, according to the American Public Media reporters, who wrote it’s unlikely Flowers will be granted bail as the prosecutor mulls his next move.