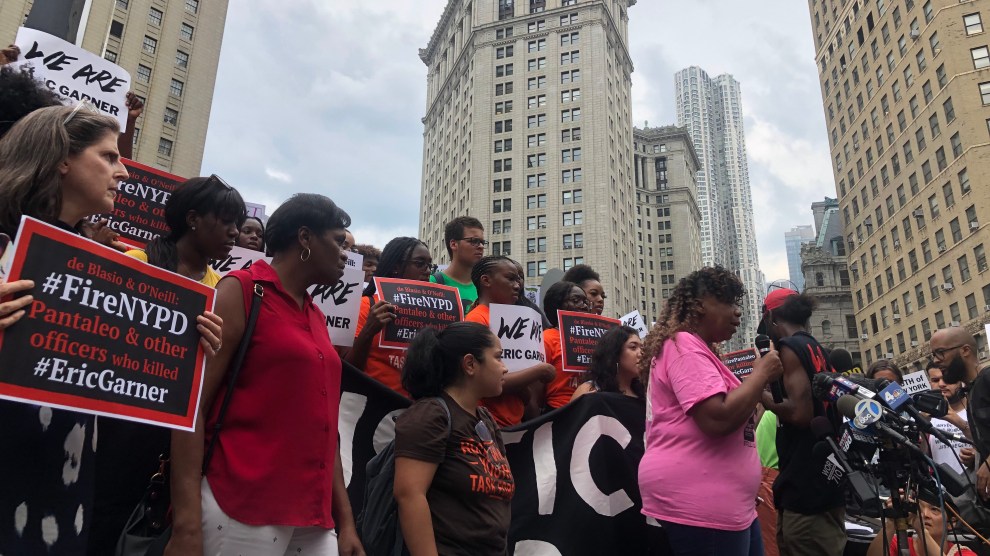 Gwen Carr speaks to protesters in New York a day after the Department of Justice announced no federal charges would be filed in the death of her son, Eric Garner.Sam van Pykeren

Garner’s mother, Gwen Carr, addressed a crowd of about 300 in Foley Square. “My son was killed five years ago today, and I’m still feeling that same pain,” she said, pausing between sentences to allow the crowd, acting as a sort-of microphone, to repeat her words back. “I just appreciate your support that I’m getting from all of you. This makes my heart smile. But especially the youth. You are the ones that are usually the target. We can’t let that be the norm. You deserve the chance to walk these streets like anyone else.”

Garner, an unarmed black man, died after Pantaleo held him down using an illegal chokehold maneuver. Police officers were in the process of arresting Garner on suspicion of selling loose, untaxed cigarettes in 2014. Garner’s last words were famously “I can’t breathe,” which has become a powerful rallying cry for the Black Lives Matter movement.

Despite the blistering heat Wednesday, protesters huddled close together, raising signs that read “STILL CAN’T BREATHE” and “WE ARE ERIC GARNER,” and chanting, “Black lives, they matter here.” Carr and members of local youth activist organizations pleaded with the city to fire the officers involved in Garner’s death, while New York police officers stood calmly by, watching at the fringes of the crowd. Then Carr, followed by men carrying a mock casket bearing Eric Garner’s name, led the crowd on a march around City Hall and toward the New York Police Department headquarters, about a quarter mile away. All the while, marchers wiped sweat from their brows and chanted “No justice, no peace” and “Hey hey, ho ho, racist cops have got to go.”

Most of those marching were affiliated with criminal justice activist organizations, and many said they felt that Pantaleo was not adequately punished for his role in Garner’s death.

Alexis Silva, a 25-year-old Amnesty International staffer, was born and raised in New York and said that she has seen the disproportionate policing of black and brown communities firsthand, as she has always lived in disenfranchised communities with a heavy police presence. “I truly believe that [the police’s] main and only goal in the United States is to uphold the Constitution, which does not protect black and brown people,” she said. “Therefore, they are state-sanctioned murderers.”

Zoë Hopkins, a 19-year-old student and activist, said that Garner’s death inspired her to work toward prison abolition. “I’m yelling and I’m screaming and I’m here in the streets because I need to demand justice for my people and for all those murdered by the police,” she said.

Lillian Forman, 83, has been attending various civil rights rallies since the 1970s. As the protesters marched toward the New York Police Department headquarters Wednesday afternoon, Forman, a volunteer with an anti-Trump political organization called Refuse Fascism, hung at the back of the crowd.

Aya Messaoudi, a 21-year-old Moroccan immigrant and member of the Party for Socialism and Liberation, said that she has been rallying against police violence since she moved to the US in 2014, around the time of the Ferguson protests. “Every single reform hasn’t given justice to anyone,” she said.

Marvin Knight, a 76-year-old retired security and shipping clerk, said he thought that President Donald Trump was responsible for Barr’s decision not to prosecute Pantaleo with federal civil rights charges. When asked how the police’s treatment of people of color has changed over his more than 50 years as a New York City resident, Knight replied, “Not at all.”