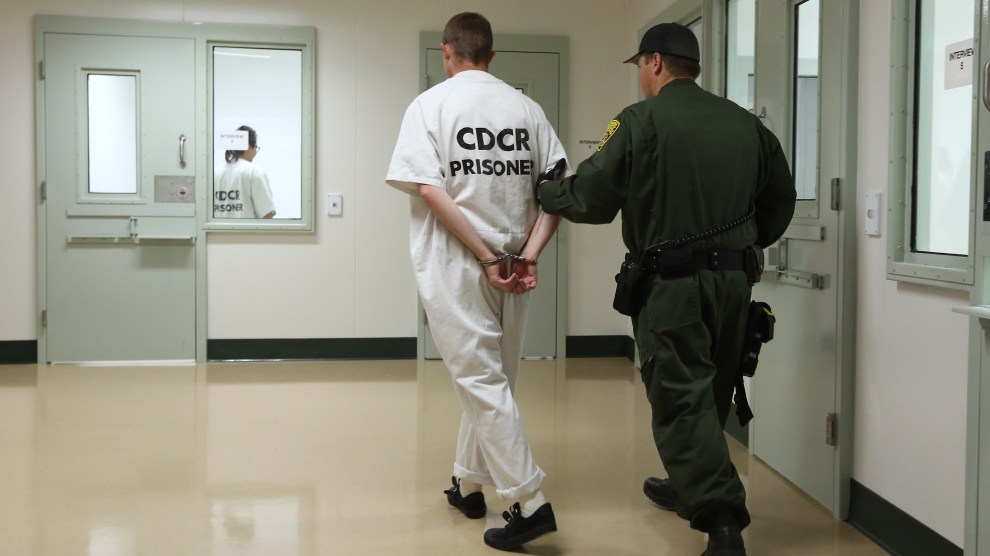 A patient is moved after a session with a psychologist at the the mental health unit at the California Medical Facility in Vacaville, California, in 2014. Rich Pedroncelli/AP

In July 2018, Dr. Michael Golding, the chief psychiatrist for California’s correctional department, visited a maximum-security prison near Sacramento to shadow a couple of psychiatrists there. At least three-quarters of their scheduled patients missed their morning appointments. That afternoon, he and one of the psychiatrists went to a cell block, trying to find the no-shows among a huddle of towel-clad inmates returning from the shower, to talk at least for a minute or two with people struggling with issues like manic episodes and suicidal thoughts.

To Golding, it was a sign the system wasn’t working properly. How could you treat someone in a crowd of other inmates, without any privacy or substantive time to talk? But a week later, prison officials burst into applause during a meeting after discussing the facility’s mental health care: state data suggested 90 percent of the prison’s patients were being seen at their scheduled appointments, even though only about a quarter of patients had made it to their appointments during Golding’s visit. He recounted this in recent court documents, arguing the data was misleading: For one, the department considered an appointment completed on time even if it consisted of two nonconfidential minutes chatting with a doctor in the hallway after a shower or in the yard surrounded by other people.

Last week, based on Golding’s whistleblower testimony about medical care in correctional facilities, a federal judge ruled that the California corrections department knowingly gave a court misleading data that covered up or downplayed the extent of a continuing mental health crisis in its prisons.

“A system in which a large majority of patients are not getting psychiatric care when scheduled or otherwise when they need it, and which is not set up in such a way that patients are brought to psychiatry appointments in confidential offices, but in which instead, the psychiatrist is expected to search the prison yard looking for patients or trying to communicate through a crack in the cell door and unable to look at the patient while speaking loudly to be heard through the crack in the door, is by no means conducive to good patient care,” Golding wrote in a 161-page report to the court last year. “It might not be surprising to find high rates of hospitalization and suicide in such a poorly designed and run system.”

The judge’s ruling is part of a decades-long class-action lawsuit by inmates seeking better medical care. In 1995, a court ordered the state to provide better access to psychiatrists and mental health appointments in prisons, saying the quality of care was so poor it put people at risk of serious death and injury. Since then, the state has been required to check in with the court about its progress, in a system where more than a third of inmates receive treatment for mental illness. In 2011, the Supreme Court famously ordered California to downsize its prison population because overcrowding made it impossible to give them adequate care. But in recent years, the state presented data to the court that showed improvement. In 2018, the corrections department claimed 94 percent of appointments across its prisons were completed in a “timely” way, according to Golding’s report. He contends fewer than half of inmates were actually seen at their scheduled appointments.

According to a transcript released Wednesday, US District Judge Kimberly Mueller found Golding’s report extremely compelling. “Misleading information was provided to the Court, make no mistake,” Mueller said in a hearing on October 23. She added that while she saw no evidence the state committed intentional fraud, which would involve a scheme to hide a key fact from the court, there was, “at minimum….willful blindness or reckless indifference, given the context in which the decision was made.” The choice to make the data seem better, she added, was “misguided and a symptom of an approach marked by a quick, really unthinking fix and applying a very tiny bandage to a festering wound while the infection spreads throughout the body.”

The corrections department, according to Golding’s testimony, considered an appointment completed if a psychologist or psychiatrist met with a patient for a minute or two in the yard or at his cell, speaking through a slit in a solid metal door, or surrounded by other inmates and custodial officers. It also counted telepsychiatry visits, which sometimes allegedly consisted of a laptop being placed outside a cell door so that the patient could speak with a therapist onscreen, but still with no privacy. According to Golding, the data system defaulted to recording appointments as confidential, and many medical staffers said they didn’t know how to change that classification: At one crisis bed facility, all appointments in May 2018 were recorded as occurring in private spaces, but psychiatrists on the ground said that almost none of them did, except for the one time that month when a court-appointment monitor was present. “These are not adequate medical appointments,” Golding wrote.

What’s more, he said, though the court ordered that certain patients should be seen every 30 days, the corrections department in 2016 began to count appointments as compliant if they occurred within 45 days. (The next year it stopped doing this after Golding objected.) Making matters worse, officials would reset the clock every time a person transferred to a new prison, meaning he or she could go much longer before an appointment and it would still be considered on time. Golding added that department psychologists, who are not medical doctors, wore badges identifying themselves as such and made medical decisions like discharging patients and ordering restraints without consulting with psychiatric physicians.

The consequences for patients can be dire. In 2017, a woman in a Chino prison cell ripped out her eye and ate it during a psychotic episode after having screaming fits for four hours. Earlier that day she was evaluated by a psychologist, who could not give her medication. Even during the screaming fits, the psychologist did not call a psychiatrist, who could have prescribed medication—one allegedly wasn’t called until later, after the eye had been eaten, according to Golding’s report. “The tragedy is that any competent psychiatric physician or general medical physician would have medicated the patient, and likely the patient’s eye would still be in her head had that happened,” Golding wrote.

California’s inmate suicide rate is one of the worst among the country’s largest prison systems, and it has risen steadily for the past four years—from 19 suicides per 100,000 inmates in 2015, to 26 suicides per 100,000 inmates in 2018, according to an investigation by the San Francisco Chronicle. From 2001 to 2014, the number of suicides in California prisons was double the number in the entire federal system, even though there are more federal inmates.

Before Golding first complained to the court last year, the state corrections department had argued that it didn’t need to hire more psychiatrists because conditions had improved even with the vacancies. Recruiting mental health staffers is a challenge for prisons across the country, as the Marshall Project reported, and California is experiencing a shortage of psychiatrists across the state, according to data cited by the governor’s office. “In a system that is failing to get more than 50% of patients to their appointments, many more psychiatrists are needed than would be otherwise, because of the wasted time, the enormous work needed to try to find patients who did not come,” Golding wrote.

The California Department of Corrections and Rehabilitation “appreciates the court’s attention to these important issues and remains committed to providing appropriate and constitutional mental health care and services to all in its custody,” a spokesperson for the department told Mother Jones. “The department is making a number of improvements to its systems to ensure that all of our data is accurate and reliable.”

Judge Mueller asked attorneys for California inmates to submit recommendations for what changes should be made going forward and noted that the state had already filed some corrections to fix the record of certain misleading information. She urged both sides to remember the goal they’ve been working toward since 1995, to provide people struggling with mental illness with the “absolute, undeniable right to adequate treatment.”

“This Court,” she added, “is called upon to make clear what should be patently obvious, and that is that remediation may not be accomplished by end runs and hiding the ball to create a false picture to the Court.”