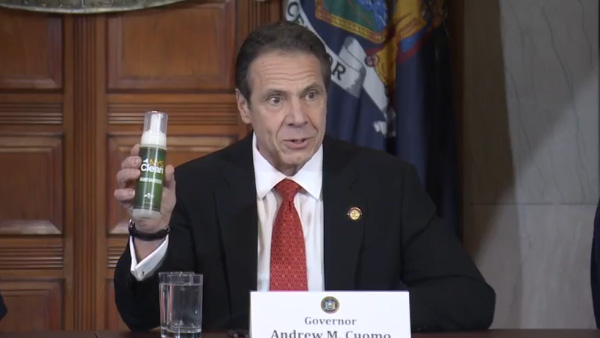 Gov. Andrew Cuomo unveils a new hand sanitizer that New York will distribute to schools and government agencies.Screenshot of livestream

Hand sanitizer is out of stock at many stores and fetching absurdly high prices on Amazon. So New York will make its own: Gov. Andrew Cuomo announced Monday that as part of a response to the coronavirus oubreak, the state will distribute floral-perfumed “NYS Clean” sanitizer to schools and government agencies.

The catch? The new hand sanitizer is produced by people in prison who earn pennies per hour. Because of their poor access to hand-cleaning supplies, these workers face a higher risk of infection from the virus—and it’s not even clear that they themselves will be able to use the sanitizer. At most prisons across the country, inmates aren’t allowed to use hand sanitizer because its alcohol content means it’s considered contraband. In some prisons, soap is in short supply. Combine that with the cramped quarters and spotty medical care in many lockups, and you have the perfect breeding ground for infections.

At least 142 people in New York have tested positive for COVID-19, the disease caused by the new coronavirus. Public health officials have recommended that people wash their hands regularly or use a hand sanitizer with at least a 60 percent alcohol content to try to slow the outbreak. Gov. Cuomo boasted that the inmate-made NYS Clean hand sanitizer is 75 percent alcohol. It’s produced by CorCraft, the state’s prison-run business, which paid incarcerated workers an average of 65 cents an hour in 2016, according to a Gothamist report. (New York hasn’t increased prisoner pay in 25 years.)

In his announcement, Cuomo said the product would be distributed to schools, government agencies, the MTA, and prisons. But just last year, a directive from the state corrections department specified that incarcerated people could not receive packages in the mail with any toiletries that contained alcohol, such as hand sanitizer—presumably because it was contraband.

It’s unclear if New York’s corrections department will break from the norm and allow prisoners to use the hand sanitizer themselves. On Monday, a spokesperson for the state corrections department declined to answer when I asked whether inmates would have permission to use the new product. When I asked about the department’s policy for hand sanitizer, the spokesperson directed me to the governor’s office. The governor’s office did not immediately respond.

Wow. Considering that many incarcerated men & women are subjected to inhumane conditions, including no hand soap, & hand sanitizer is banned in most prisons, this is especially demeaning, ironic & exploitive. https://t.co/LnYHP0QbFb