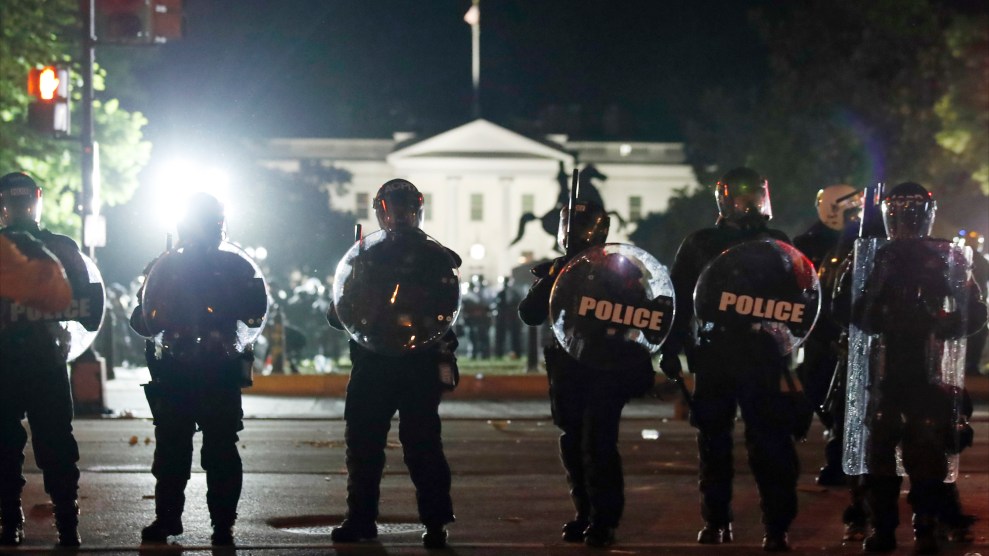 Police form a line on H Street as demonstrators gather to protest the death of George Floyd, Sunday, May 31, 2020, near the White House in Washington. Alex Brandon, AP

For the sixth-straight day, demonstrators took to the streets across the country Sunday to protest systemic police brutality and racism following the police killing of George Floyd in Minneapolis on Memorial Day. The Washington Post reports, “Police arrested more than 2,500 people in two dozen U.S. cities over the weekend.” But that was before Sunday night was over.

On Sunday, Washington, D.C., joined the 40 cities that have imposed curfews, aiming to stem the violent turn the demonstrations have taken over the weekend. As our colleague Nathalie Baptiste reported, “Police officers in cities around the country responded to protesters with egregious tactics, from unprovoked violent shoving to indiscriminate pepper spraying.”

Mother Jones’ Julia Lurie has been reporting on the protests on the ground in Minneapolis, and Stephanie Mencimer and Will Peischel were on the scene in D.C. Here’s what they’ve seen.

Update: cops surrounded the crowd, protesters are on the ground, being arrested one by one. If all reporter photos look the same it’s bc press was told to stay on a bench or else they’d be arrested pic.twitter.com/hVZRRP5sRo

Protest down Chicago Ave in Minneapolis. Not heard on camera: the kid with the bullhorn saying “I’m just a sophomore in high school. I shouldn’t be doing this. Where are our leaders?” pic.twitter.com/j3bIoPWPDf

After a day of peaceful protests in DC, as night fell, thousands of protesters gathered on the streets near the White House. A few hours ago, Mayor Muriel Bowser announced an 11 p.m. curfew and activated the National Guard to assist D.C. police.

People coughing and choking and getting doused with water to deal with the smoke bombs #DCProtests pic.twitter.com/ObX5X7Q9gF

This are getting out of hand by the White House. “This isn’t right,” a guy next to me says. “This is our city.” #DCProtests pic.twitter.com/u5sCvCy2TP

With the 11PM deadline approaching, police and protestors are locked in a cycle of protestors approaching the fence, eventually being gassed and pelleted, then moving back to. pic.twitter.com/ts8sauDbYC

It sounds like a war zone down here. Helicopters, sirens and booms.#DCProtests