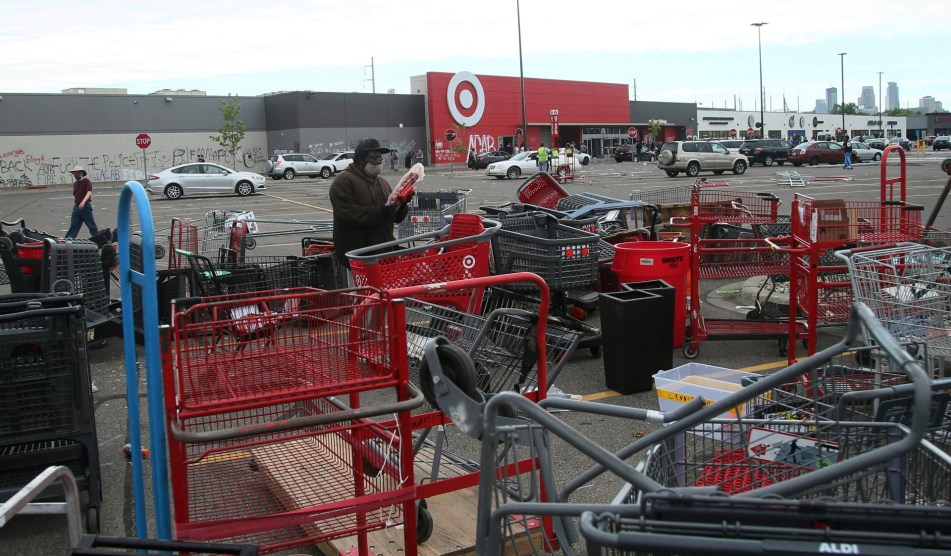 As images circulated of businesses damaged in the Minneapolis protest, an old narrative of finger-wagging and false concern took over along the right flank of the discourse. What about the Target? What about the AutoZone? What about “your OWN community”?

Burning down your own community won’t bring back #GeorgeFloyd.

It won’t secure justice. It won’t avenge his death.

Stop claiming #BlackLivesMatter while you actively put your black life in danger.

Why is the reaction to someone’s death to loot a Minneapolis Target? It’s simply an excuse to act like heathens. pic.twitter.com/3KnJqpiQaF

Peaceful protest is one thing, they insist, but such violence is never the answer. In bewilderment and sanctimony heads shake around the country.

But their condescension is built on a myth that has its roots in the uprisings of another era. The myth is that chain stores and franchises are somehow part of Black communities. Target isn’t “ours” in any substantive way. AutoZone isn’t some cherished neighbor, saving us from bad alternators and racism. The franchise chains aren’t some engine of Black capitalism that will redress the grievances of the people in Minneapolis’ streets. We know they won’t because America has already tried.

This was in the wake of the civil rights movement, amid insurrections in Black cities. Franchises like McDonald’s were posited as a catch-all solution to urban unrest, as author Marcia Chatelain writes in her book Franchise, about the role of the fast-food industry in Black America.

“There’s this huge social upheaval, [after Martin Luther] King’s assassination,” Chatelain told me in an interview earlier this year. “There’s property damage, there’s violence; and then when the dust settles, everyone is looking around, like ‘What are we going to do now?’ And the response from corporate America, as well as the government, is: If we are going to quell social unrest in Black communities, we should develop these economic programs that pivot around business.”

The businesses made serious inroads. By the mid 1980s, McDonalds boasted that “almost 6,000 McDonald’s restaurants in neighborhoods across the country employ thousands of Black men and women.” But of course, they never delivered on the promise of true racial uplift. Nothing about the fast food industry’s arrival in Black America did anything to challenge housing segregation or discriminatory bank lending, Chatelain explained. Instead, it kept people employed in low-wage jobs while draining consumer dollars from local communities.

Still, the Golden Arches did conveniently claim their Black America bona fides when it benefited them.  Various McDonalds locations around South Los Angeles were unscathed in the 1992 Rodney King uprisings. The company attributed its good fortune to the “involvement of the neighborhoods it serves.” Whether these locations actually benefited from community goodwill or police protection or some combination of the two, Chatelain said, is besides the point.

The more important question is about the societal conditions that led to the uprising nearly a quarter century after King’s death. Wasn’t Black capitalism supposed to have done away with all those inequalities? Another quarter century later, we’re still asking the same question.

Today, big-box retail stores are no more a part of the community than fast-food chains. Minneapolis, corporate home of Target, a $77 billion company, is still deeply segregated, and the poverty rate for Black people in the city is more than three times that of white residents. The downtown Minneapolis Target store was built with a public subsidy of $60 million. Nearby Brooklyn Park pledged $22 million in tax breaks for Target’s headquarters. In 2015, the company laid off 1,700 people. Who exactly is looting whom?