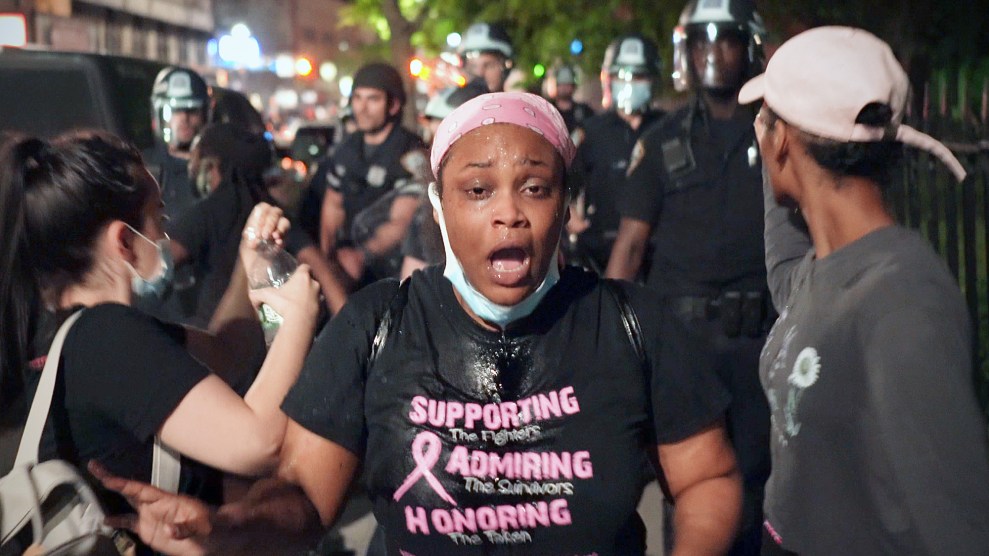 Over the past few days, nationwide protests against police violence have turned into an alarming display of the very treatment protesters are rallying against.

I live in Brooklyn and followed this weekend’s protests from my apartment, endlessly scrolling through videos: protesters being run over by a police car, cops shoving an elderly man a with cane to the pavement, all manner of aggressive police escalation, and journalists being explicitly targeted and injured time and time and time again.

But I got a firsthand view of the mayhem—and the police-fueled violent escalation—when I arrived in the Flatbush neighborhood late last night to cover the protests.

The scene was a tinderbox. In the majority-Black neighborhood, shouting filled the streets while several police helicopters throbbed overhead and NYPD officers confronted protesters with varying levels of force. I captured only a sliver of the action on-camera, but enough to show how some officers intensified an already-fraught situation with violent conduct: shoving a woman into a city bus, charging full-speed into groups of already retreating protesters, tackling a seriously injured man, and roughing up journalists and camerapeople (myself included).

Videos of all that (and more) in my tweets below:

She was shoved into an MTA bus multiple times—then had a message for the NYPD:

"Beat me. You wanna beat me so bad? Beat me, bitch. I'm finna die for my people." pic.twitter.com/xmbCqnQXgq

When I first arrived, saw a cameraguy in bad pain. Said his foot is broken & phone is dead. Lives nearby w wife & 2 kids.

Lent him my charger, he calls a friend. I supported his full body weight to help him to a pickup spot & left.

Thought that was it. 20 min later: pic.twitter.com/nIJZU3UTPq

If you made it to the end of the last clip, you've been introduced to this woman who seems to have been tear-gassed.

She needs milk of magnesia to quell the burning. pic.twitter.com/FoQ6EqA4hK

Leaving the protest, I noticed a graffitied police car.

Someone made an addition to the NYPD slogan of "Courtesy, Professionalism, Respect." pic.twitter.com/Bp557IUFOG

Alright, I think that's it for the night. Time to wind down.