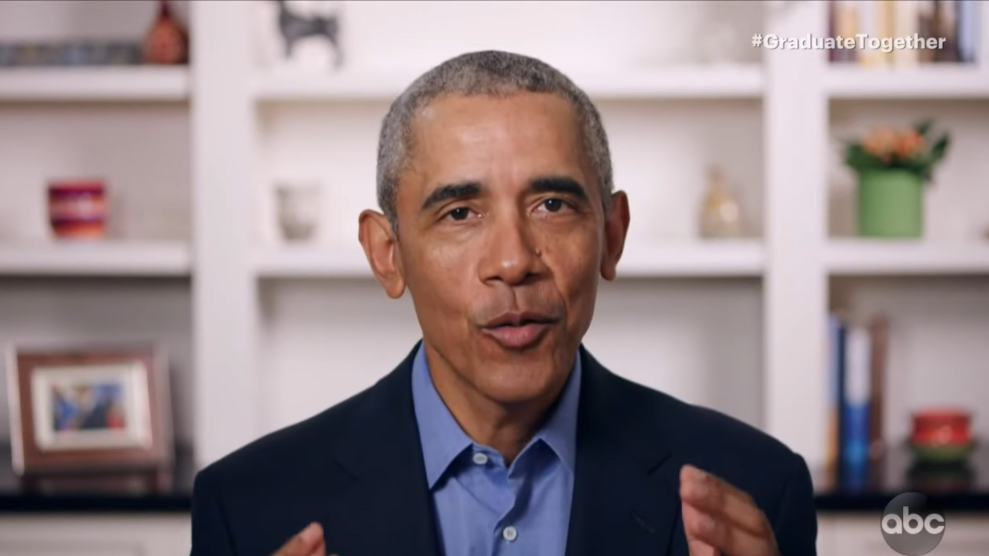 President Barack Obama also addressed youth during a virtual graduation ceremony for the Class of 2020 on May 17.Amanda Rose/ZUMA

On a Wednesday afternoon livestream, President Obama delivered an optimistic message about the protests gripping the nation in response to police violence: “There is a change in mindset that’s taking place,” he said.

.@BarackObama: "There is something different here." We're witnessing “a far more representative cross-section of America out on the streets, peacefully protesting…That didn't exist in the 1960s." pic.twitter.com/BOE49rK0wR

In a town hall, organized through My Brother’s Keeper, an initiative he launched as president, Obama acknowledged that while the last few weeks have been “difficult, uncertain, and scary,” we are also living through “an incredible opportunity for people to be awakened” to the ongoing reality of structural racism—”the result of a long history of slavery, Jim Crow laws, and redlining.”

He called on every mayor in the United States to review police use-of-force policies.

“This is not an either/or,” he said of protesting and pushing legislative reform on the local level. “This is both/and.”

Comparing the discord and unrest of today to that of the 1960s, Obama said we’re witnessing “a far more representative cross section of America out there on the streets protesting” than in the past. He credited the organizing and engagement of young people with forging popular support among a “broad coalition” of Americans regarding the need for transformative change in police use-of-force tactics. And he pointed to the Guide to Fair, Safe, and Effective Community Policing that came out of a task force he convened as president, stating that mayors and police chiefs across the country have been too slow to implement the report’s recommendations.

As Mother Jones has reported, President Obama’s tenure featured renewed attention to enforcing consent decrees, which subject local police departments to federal oversight and sometimes lead to reform. Obama enforced 14 of the 20 legally binding consent decrees that have arisen since Congress created the system after the Rodney King uprisings of 1992. Trump and former Attorney General Jeff Sessions have all but eliminated this oversight.

Yet Obama has also drawn flack from Black Lives Matter activists for what they see as his lukewarm embrace of the movement, centrist critique of protest tactics, and unflinching support for law enforcement. After police officer Darren Wilson killed Mike Brown in 2014, Obama and Eric Holder’s Justice Department released a 100-page report on patterns of racial discrimination among officers in Ferguson, Missouri, but declined to prosecute Wilson. In today’s town hall, Obama commended officers who have chosen to “march with protesters,” but did not spare a word for the ongoing police repression tactics. He also did not mention the editorial from Sen. Tom Cotton, published by the New York Times hours before, calling for troops to be sent in on protesters.

Instead, focusing on a message of hope, Obama thanked youth leaders for prompting a necessary conversation. “Just make sure that we now follow through,” he said.