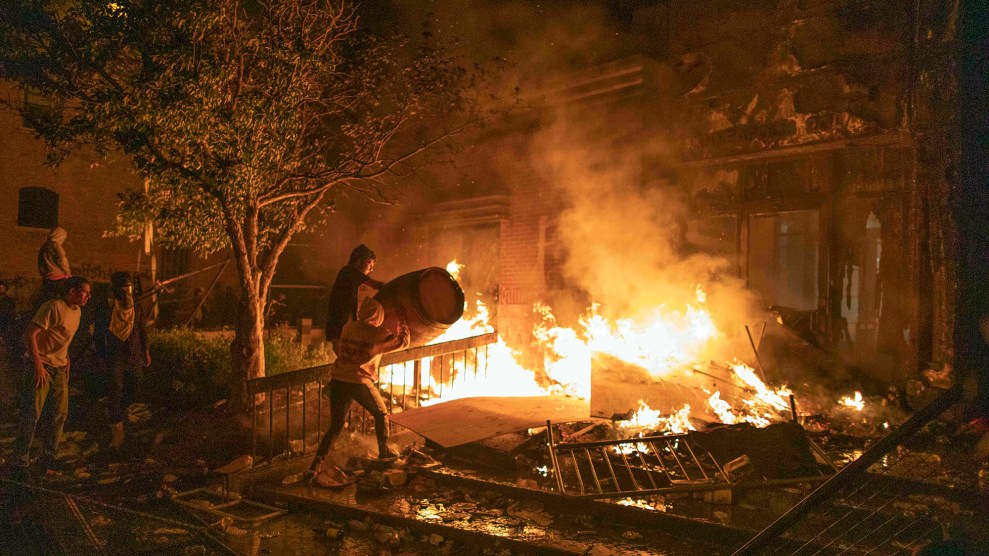 Protesters move a wooden cask together into a fire in an attempt to burn down the Minneapolis 3rd police precinct after riots broke out all over the Twin Cities over the police killing of George Floyd. Chris Juhn/Zuma

For nearly a week, protesters have taken to the streets in dozens of American cities. It’s a swelling of outrage and, thanks largely to militarized police forces, violence not seen in the United States since 1968, when a confluence of very preventable events—the assassination of Martin Luther King Jr., escalation of the war in Vietnam, a bitter presidential election—pushed nearly anyone with a political conscience into physical action.

Outrage is a unifying emotion. It’s intimate and collective.

The specific circumstances of today’s unrest are different, and arguably more heartbreaking. In the first several months of 2020, at least a handful of Black people have been wantonly killed by police or white vigilantes. Ahmaud Arbery was jogging around his Brunswick, Georgia, neighborhood when white men chased him down in a pickup truck and shot him multiple times. Breonna Taylor was sleeping in her Louisville, Kentucky, apartment when cops executing a no-knock search warrant barged into her home. George Floyd was confronted by police in Minneapolis and effectively choked to death as an officer knelt down on his neck before a crowd of onlookers. Tony McDade was shot to death by an officer in Tallahassee, Florida.

While the violent deaths of Black people are often the drumbeat of American life, this specific tone is deafening. Converging at the same time, of course, is the coronavirus pandemic, which has killed more than 100,000 people in America. Black communities have borne a disproportionate number of those deaths. A months-long lockdown has effectively shuttered the American economy and 40 million people have filed for unemployment. Stay-at-home orders issued by mayors and governors across the country to slow the spread of the virus have also had the unintended but inevitable effect of plunging even privileged people with safe homes and steady jobs to the brink of mental crisis. That’s to say nothing of the desperation felt by people without those safe homes or steady jobs.

I could keep listing the awful things, but I won’t. On some level, every one of us is stuck in our own private world of controlled chaos. To be human now is to be isolated, uncertain, and scared. It’s no wonder that so many people have taken to the streets. Outrage is a unifying emotion. It’s intimate and collective.

Listen to this essay, and more protest reporting from across the country, on this week’s episode of the Mother Jones Podcast:

The seemingly small actions at barbecues and of bird watching had to inevitably lead to something larger.

Not even the bleakest of pessimists could have anticipated that the first term of Donald Trump’s presidency would end just like this. But don’t pretend any of this is a surprise. For three and a half years the president of the United States has used outright racism as a rallying call, baiting his followers to act. And they have. The seemingly small actions at barbecues and of bird watching had to inevitably lead to something larger. I was in a near catatonic state this weekend when I thought about reading James Baldwin’s The Fire Next Time to write this piece, but I was too dejected to do it. Instead, one line from Mos Def’s 1999 Black on Both Sides kept playing in my head: “Why did one straw break the camel’s back? Here’s the secret: the million other straws underneath it.”

America’s long, violent summer has begun. Buildings will burn and people will die because people have been dying—in their homes, at local hospitals, and in detention centers. It would be naive and downright dangerous to expect anything different.