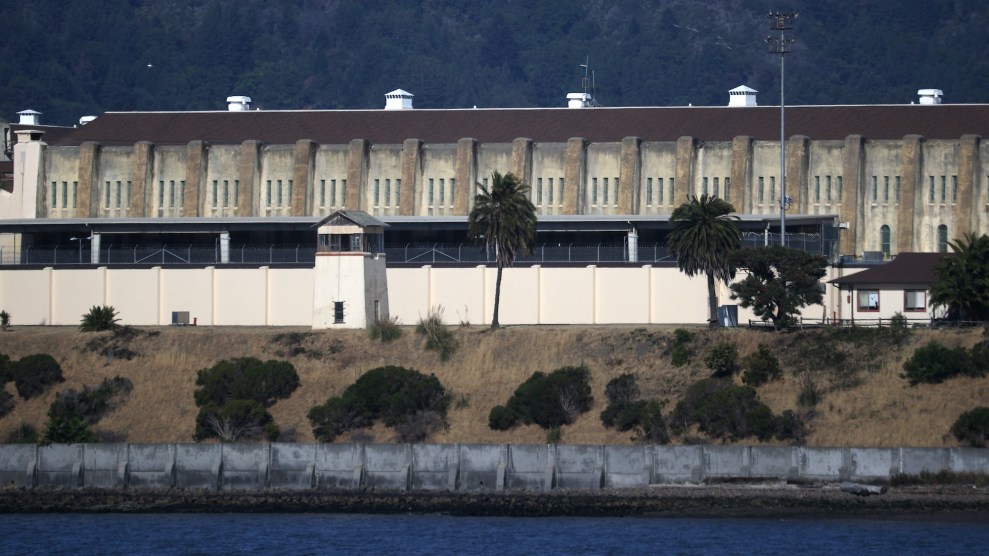 On April 13, 1918, a prisoner from the Los Angeles County Jail was sent north to the California State Prison at San Quentin. The prisoner was sick at the time he was transferred; he had suffered “pains over his body accompanied by fever,” a San Quentin doctor, a noted eugenicist, wrote in a public health report. Yet the day after the prisoner arrived, he was allowed in the yard with 1,900 men; ate in the cafeteria; and, that night, “was locked in the receiving room with about 20 other newcomers.” Within 10 days, half the prison population had fallen ill. San Quentin would go on to become one of the main epicenters of the 1918 influenza pandemic.

More than a hundred years later, history is repeating itself. An investigation published June 20 by the San Francisco Chronicle found that after months of largely escaping the COVID-19 pandemic, San Quentin is now rife with coronavirus cases after sick inmates were transferred into the San Francisco Bay Area prison from Southern California.

“For some reason, prison leaders had mingled the men from the virus-swamped facility in Chino with previously healthy and uninfected members of the San Quentin population.”

The prison had zero confirmed COVID-19 cases on May 30, when California Department of Corrections and Rehabilitation (CDCR) officials transferred 121 prisoners from the “hard-hit” California Institution for Men in Chino to the Bay Area prison with the goal of protecting them from the outbreak. Some of the men hadn’t been tested for weeks prior to being transferred, according the Chronicle; a few started showing symptoms on the bus ride north. Once they arrived at San Quentin, 15 tested positive. By June 16, there were 195 cases at the facility.

The Chronicle‘s investigation, which called the COVID-19 outbreak inside San Quentin both “preventable and self-inflicted,” attributed the virus’ exponential spread to the decision to house transferred prisoners in the same housing unit as uninfected inmates. Jesse Marez, who is incarcerated in that unit, Badger, told reporters he has recently tested positive for COVID-19:

The doors of the cells in Badger are made of bars, not solid materials, allowing vapor and droplets to mingle in the air and fall from the upper tiers to the lower ones, where Marez was celled along with about 200 other prisoners who were not from Chino. “We breathe the same air,” he said. “We use the same showers.” For some reason, prison leaders had mingled the men from the virus-swamped facility in Chino with previously healthy and uninfected members of the San Quentin population.

Since the transfers, according to the Chronicle, the situation in San Quentin has deteriorated quickly. At least two housing units have been placed under medical quarantine, including Donner, which is located next to Badger:

“This outbreak is crazy,” said Marlon Slaffey, 42, another incarcerated man in Donner. He said he is sick, with a cough and chills, and many other men in his unit are also showing symptoms of COVID-19: “They’re throwing up. Can’t even hold glasses of water down. Diarrhea. People can’t breathe. They’re calling ‘man down’ every 20 or 30 minutes.”

Added Slaffey, “Everybody was clean until the Chino bus(es) came.”

Dana Simas, a CDCR spokesperson, told the Chronicle that extra public health staff had been sent to San Quentin and medical providers were “working diligently to provide testing and assessments to the incarcerated population within the institution in order to make immediate housing and health care decisions.” But prison officials have been providing false information about the outbreak to lawmakers and journalists, the Chronicle reports, including an initial, inaccurate claim that the Chino prisoners “were not exposed to the general population.”

Prison staffers have been warning for months that efforts to contain and prevent COVID-19 among incarcerated populations will be futile as long as prison systems keep transferring inmates between facilities.

As my colleague Samantha Michaels has reported, prison staffers and their unions have been warning for months that efforts to contain and prevent COVID-19 among incarcerated populations will be futile as long as prison systems keep transferring inmates between facilities, especially if they do so without testing them first. A bill to empower the Bureau of Prisons to halt transfers among the federal prison population, introduced in April by Rep. Fred Keller (R-Penn.), is currently sitting in a House committee. Meanwhile, some places that had stopped moving inmates from local jails to prisons have recently resumed transfers.