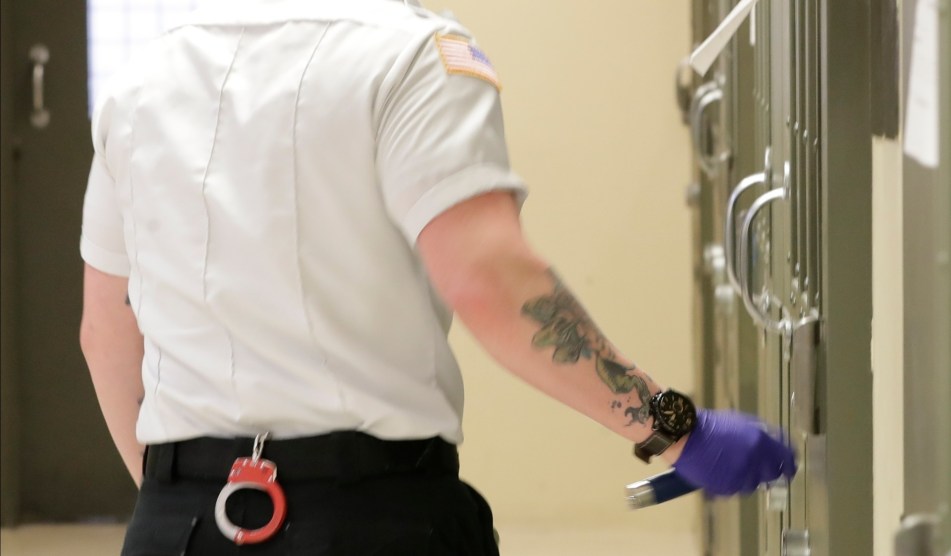 Guards in an immigrant detention center in El Paso sexually assaulted and harassed inmates in a “pattern and practice” of abuse, according to a complaint filed by a Texas advocacy group urging the local district attorney and federal prosecutors to conduct a criminal investigation.

The allegations, detailed in a filing first obtained by ProPublica and The Texas Tribune, maintain that guards systematically assaulted at least three people in a facility overseen by Immigration and Customs Enforcement—often in areas of the detention center not visible to security cameras. The guards told victims that no one would believe them because footage did not exist and the harassment involved officers as high-ranking as a lieutenant.

According to the complaint filed with the Department of Homeland Security’s Office of Inspector General and shared with prosecutors, several guards “forcibly” kissed and touched the intimate parts of at least one woman. She faces deportation next week — meaning investigators could lose a key witness. Her attorneys have requested that immigration officials pause her deportation pending a review of the matter.

The woman said in a telephone interview that she would rather return to Mexico, even though she is in danger there. She said she worried about being targeted in the detention center for speaking up about the abuse.

“It’s going to get worse now,” she said. “I can’t handle this anymore.”

Since the complaint was filed Wednesday, two more women, including one who is currently detained in the El Paso facility and one who was previously held there, have come forward with abuse allegations. At least one other woman was deported after a guard assaulted her, detainees told lawyers.

An El Paso County District Attorney’s Office spokesperson said that the agency had forwarded “potentially criminal allegations” to the DHS’ Office of Inspector General, which did not respond to emails seeking comment. A spokesperson for the U.S. Attorney’s Office for the Western District of Texas said that it had received the complaint and takes allegations of “misconduct by public officials extremely seriously.”

A spokesperson for ICE wrote in an email that the agency was aware of the accusations and that they would be investigated, including by its Office of Professional Responsibility. A 2003 law intended to protect against such abuses sets stringent standards for detention facilities.

ICE has “zero tolerance for any form of sexual abuse or assault against individuals in the agency’s custody and takes very seriously all allegations of employee misconduct,” the spokesperson wrote. “When substantiated, appropriate action is taken.”

A spokesperson for Global Precision Systems, a subsidiary of Bering Straits Native Corporation, which contracts with ICE to run the El Paso facility, wrote in an email that she could not comment on pending legal matters.

The El Paso allegations are the latest instance of sexual abuse complaints related to detention centers run by ICE, which imprisons about 50,000 immigrants across the country each year — mostly through contractors at a taxpayer expense of almost $2.7 billion.

About 14,700 complaints alleging sexual and physical abuse were lodged against ICE between 2010 and 2016, according to federal data obtained by the advocacy group Freedom for Immigrants. The group found that only a small fraction were investigated by the Office of Inspector General.

In 2018, the most updated statistics available online, ICE reported 374 formal accusations of sexual assault, of which 48 were substantiated by the agency and 29 remained pending an investigation as of that year.

Most recently, in a May federal court filing in Houston, a Mexican woman said that she was in an ICE facility there in 2018 when she and two female detainees were moved to an isolated cell. Around midnight, three men wearing facial coverings entered the cell. They raped and beat them, according to the complaint. The immigrants were bused to Mexico hours later, where the woman eventually discovered she was pregnant from the assault.

A spokesperson for the company overseeing that detention center, CoreCivic, denied the allegations, calling them “slanderous.” The woman’s attorney, Michelle Simpson Tuegel, said the pregnancy aligns with the woman’s stay in ICE detention. The civil lawsuit is ongoing.

The El Paso accusations that are the subject of this latest complaint to authorities came to light when one of the women, a 32-year-old Salvadoran, was released because of a medical condition and told an attorney that she feared for the detainees still there.

“She was that disturbed by what was happening,” said Linda Corchado, director of legal services for Las Americas Immigrant Advocacy Center, who filed the complaint. “It’s awful to think how disposable these women are.”

She said they are especially vulnerable because many will probably be deported, making it more unlikely that their abusers face consequences.

The Salvadoran woman told Corchado that she was detained in the El Paso facility for about three months where she was repeatedly harassed. A guard said that if she would “fool around” with him he would give her clean uniforms and soap. He told her that he would pay her “a lot of money” to meet him for sex in a spot not visible to cameras.

Two other officers also repeatedly targeted her, according to the complaint. One sent her messages through other women even after she was released.

She said in a telephone interview that guards encouraged women to sign up for anti-anxiety medication and antidepressants because they oversee the dispensing of medication at night and have access to an enclosed off-camera area.

“Most women who are still there are scared of saying anything,” she said. “You don’t know what they can do.”

A male detainee, a legal permanent resident convicted of money laundering, said that an officer in the detention center stared at him while rubbing his genitals as he showered in July, according to the complaint. After he reported the incident to a captain, the detainee was placed in solitary confinement. He began a hunger strike and was transferred to another ICE facility. Lawyers said that he speaks English and is better able to advocate for himself than most of the female victims, who speak only Spanish.

The woman who remains in the El Paso detention center and is set to be deported is a 35-year-old mother from Mexico who was charged with a drug-related crime and illegally entering the country.

During her 11 months in the ICE facility, she told lawyers that two guards assaulted her. In November, an officer touched her private areas and kissed her while she was in an area not visible to cameras. The assault happened as she was walking back from the medical unit to her barrack.

Days later, the guard did so again.

“If she behaved,” he told her, according to the filing, “he would help her be released.”

He stared at her through a window while she used the bathroom.

When she complained to a captain, she said he dismissed her. She said she did not see that officer for several months but that he later returned, becoming “increasingly aggressive and intimidating.”

“She has lived in constant panic that he may do something against her again,” according to the document.

The woman said another officer also assaulted her at least twice in a camera “blind spot,” touching and kissing her. These attacks also happened when she was returning from the medical unit to her cell.

A lieutenant passed messages through her to other detained women.

If she reported them, an officer warned, “No one would believe her.”