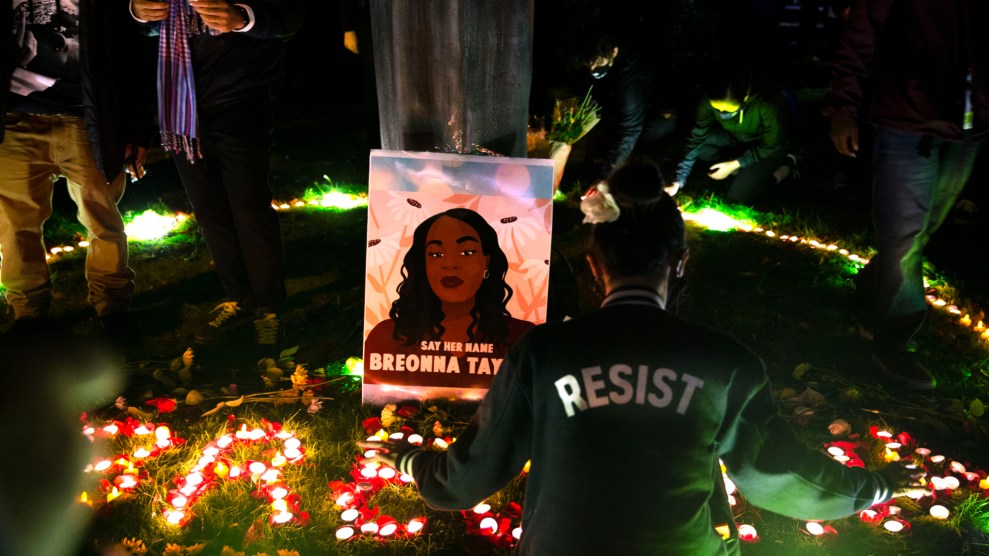 On March 13, Breonna Taylor, a 26-year-old Black woman, was asleep in her bed with her boyfriend when four police officers from the Louisville Metro Police Department used a battering ram to burst into her home. Multiple witnesses say they did not knock or identify themselves, however one witness says that the officers did announce their identity. Her boyfriend, Kenneth Walker, assuming it was intruders, shot at the police officers. In response, the cops opened fire. After 32 rounds, they had killed Taylor and shot up some neighbors’ apartments. Walker was arrested and charged with attempted murder.

Six months after Taylor was killed, following a massive public pressure campaign largely led by advocates in Louisville, the state of Kentucky announced the results of a grand jury investigation of the case. The consequences for the crime of shooting Breonna Taylor to death in her own home while she slept were that three LMPD police officers will face no charges. Former LMPD officer Brett Hankison—who was fired in June for his role in her death—is being charged with three counts of wanton endangerment for shooting into the apartments of Taylor’s neighbors.

The sheer inadequacy of the charges reverberated across the country. Criminal justice advocates and Black Lives Matter protesters denounced the outcome. The stark contrast between the reality that Black people have been killed by police for much lesser crimes—including Taylor, whose only crime was sleeping in her bed—and the stunningly lenient charges communicates something that is increasingly impossible to ignore: A police badge appears to grant officers the right to circumvent the legal system, even as they claim to uphold it.

The decision on whether or not to indict Breonna Taylor’s killers was handled by a grand jury. During Kentucky Attorney General Daniel Cameron’s press conference after the charges were announced, he said that it was important to follow the law, and that the law enforcement officials involved in the killing of Taylor had the right to presumed innocence until proven guilty.

The accused is innocent until proven guilty says @kyoag

"Justice must be done"

And yet, why wasn’t Taylor presumed innocent by the agents of the very same system they relied on to dismiss her death?

“This is the most absurd legal maneuvering that I have ever seen,” said Lonita Baker, the National Bar Association Vice President for Regions and Affiliates and lead counsel representing Taylor’s family in a statement. “If [Hankison’s] behavior was wanton to those in neighboring apartments, it was likewise wanton to Breonna and Kenny. He should have been charged with wanton murder and another count of wanton endangerment.”

And yet, why wasn’t Taylor presumed innocent by the agents of the very same system they relied on to dismiss her death?

It seems as if due process and the presumption of innocence can be flexible concepts, deployed for the convenience of law enforcement. For others, especially Black people, that right is often stripped away, which means that regular citizens are held to a higher (or is it lower?) standard than armed public servants. Cops often deploy the “fearing-for-their-lives” justification as reason for shooting and killing civilians, whether those civilians are or are not armed. That same right did not extend to Walker. He was wrong to use a weapon to protect himself and his home against intruders, and yet the police were justified in shooting Taylor because they were protecting themselves. The charges against Walker were dropped in May.

This is not a new deadly contradiction. Back in 1895, the New York state legislature created the Lexow Commission to study the actions of the New York City Police Department after pressure from a social reformer. The commission found that the police “form a separate and highly privileged class.”

"It appears that the police form a separate and highly privileged class, armed with the authority and machinery for oppression and punishment, but practically free themselves from the operation of criminal law."

The Lexow Commission said this about U.S. policing in 1895.

How much has changed in the last 125 years?

To add insult to injury, in the six months between Taylor’s death and Cameron’s announcement, the city settled a wrongful death suit for $12 million with Breonna Taylor’s family. A settlement, naturally, whose bill the taxpayers will foot. The city also banned no-knock warrants so that police will announce themselves before breaking your door down. The settlement and the reforms are tacit acknowledgments that something bad happened here, but let’s not drill down on who’s responsible.

Routinely escaping consequences or accountability allows police to continue to inflict violence, pain, and trauma on the same communities over and over again. But what has taken place during 2020 feels worse. In the past, both major political parties would engage in the requisite mealy-mouthed calls for peace and understanding, while denouncing violence on “both sides.” But courtesy of Donald Trump, Republicans no longer need to pretend that they’re interested in equality. After Cameron’s press conference announcing that no one would be held responsible for the death of Taylor, the president was the first to applaud. Not surprisingly, Cameron is a Republican.

Asked about the Breonna Taylor case, Trump says Kentucky’s AG, Republican Daniel Cameron, made a “really brilliant” statement and is a “star.”

Of course, law enforcement can act with impunity. Who can blame them with this kind of high-level support?

As more information was revealed about what the charge of “wanton endangerment” actually meant, a cruel truth was revealed: According to the state of Kentucky, the only crime the cops committed that night was one against property. Taylor’s walls mattered more than her life. As protesters took to the streets to decry the empty charges and the unjust system that police officers seem to uphold only when it suits their own, they were met with tear gas, arrests, and armed white gangs—who’ve been glorified by Trump, Republicans, and the conservative media. A suspect was taken into custody after shooting and injuring two police officers. What is the correct response to a system that repeatedly uses violence and then cherry picks the legal mechanism to justify it? More violence may not be the answer, but it certainly starts addressing the heart of the question.