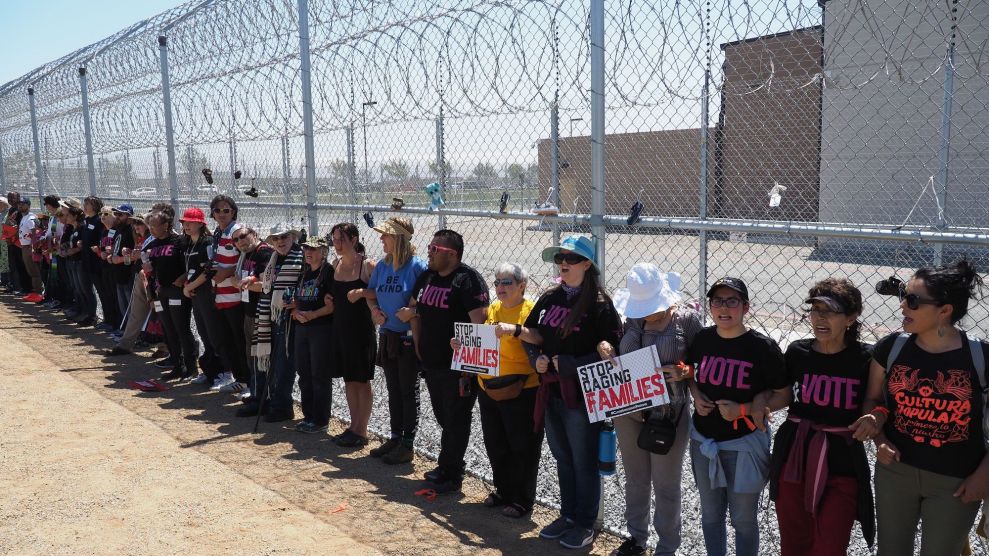 The mother who would end the Trump administration’s family separation policy arrived at the US-Mexico border in November 2017 with her 6-year-old daughter in tow. Ms. L, as she is called in court documents, told the US border guards at the San Ysidro, California, port of entry that she and her daughter had fled the Democratic Republic of the Congo and were seeking asylum. They passed an initial screening and for a few nights were sent to a facility that seemed, to Ms. L, like a motel. Then, according to a legal complaint, officers put her and her daughter in separate rooms. Through the wall, she could hear her daughter screaming. The girl was sent to a shelter in Chicago. Ms. L was transferred to Otay Mesa Detention Center, a for-profit immigration lockup outside San Diego run by CoreCivic, a private prison company.

Over the following months, the forced separation of migrant families would become one of the greatest scandals of Donald Trump’s presidency, as his appointees implemented a plan to separate parents from their children as a deterrent to future migration. More than 5,400 children as young as 4 months old have been taken from their families and sent to shelters or released to sponsors while their parents were sent to detention centers, according to Lee Gelernt, an ACLU lawyer representing Ms. L.

In June 2018, amid nationwide protests and global outcry (a United Nations spokesperson called the practice an “arbitrary and unlawful interference in family life” and “a serious violation of the rights of the child”) a federal court ruled in a class-action suit brought on behalf of Ms. L and other parents that their families must be reunited.

During this time, CoreCivic did not house children who had been taken from their parents, but its detention centers were used to hold separated parents such as Ms. L. As a federal contractor, the company is typically paid for each night an adult spends in its detention facilities. Yet CoreCivic has spent much of the past year waging a legal war against an activist who helped shine a spotlight on its role in the family separation crisis.

“It turns out,” the judge wrote, “that CoreCivic, Inc., did, in fact, operate detention facilities for parents separated from their children.”

In a federal defamation lawsuit filed in March, CoreCivic alleged that Morgan Simon, a member of the activist group Families Belong Together, had smeared the company when she called on big banks to stop financing private prison companies. Among the supposedly defamatory allegations CoreCivic was suing over was Simon’s statement that the company “manag[ed] some of the detention centers that have been at the heart of the controversy over the separation of families.”

Simon still stands by that statement. “It was a private facility that held the woman in the case that ended family separation,” she says, referring to Ms. L. “I think that’s about as at the heart of the controversy as you can get.”

Simon, a 38-year-old financial advisor in Oakland, California, who runs a socially and environmentally responsible investment firm, says she was recruited to join Families Belong Together to “bring a finance lens” to its organizing against for-profit prisons. With her assistance, the group’s corporate accountability committee mounted a campaign to persuade banks to pull their money from the private prison industry. While the committee collected signatures and supported protests at hundreds of bank branches across the country, Simon, a fiery speaker well versed in the language of due diligence and quarterly reports, met with bank employees to discuss prison companies’ operations. She also wrote a series of columns for Forbes.com highlighting the role private prison companies—and their financial backers—played in family separation.

In March 2019, JP Morgan decided to stop providing financing to for-profit prisons. Much of Wall Street followed suit, including banks that Simon called out in her columns, causing financial challenges for CoreCivic and its main competitor, the GEO Group. According to the company’s lawsuit, it was forced to take out loans on less favorable terms than what it had previously been offered, at a cost of nearly $8 million per year. Its stock price fell and kept falling. Fitch Ratings downgraded its credit.

In its defamation lawsuit against Simon and her firm, CoreCivic argued that she “knew that tying CoreCivic to the movement against family separation would mislead the public to conclude that CoreCivic ran the facilities that detained unaccompanied minors.” Her statements, it alleged, caused “financial and reputational harm, prompting the public to shun and avoid the company and driving up the cost of capital.” It demanded that the court order Simon to retract her articles and stop making any more statements like the ones it was suing her over.

“Exposing the truth about the fact that private prisons participated in family separation seems to have caused some challenges to their bottom line,” Simon says. She sees CoreCivic’s lawsuit as a sign that her activism was having an impact, though she argues that the banks were ultimately responsible for their decision to divest from private prisons. “I think that perhaps, in an environment that has been extremely challenging financially, they [CoreCivic] are looking for someone external to blame,” she says. “And to try to shut me up, right? To try to get me to stop the advocacy.”

The company’s legal strategy hasn’t worked so far. Defamation lawsuits, while often used to respond to serious allegations, hinge on truthfulness: If a statement is true, it cannot be defamatory. In a hearing on November 19, a federal judge in San Francisco appeared poised to keep CoreCivic’s case alive, until Simon’s lawyers reiterated an argument they had made in a earlier motion: Her statements about family separation were, in fact, true, because CoreCivic had housed migrants who had been separated from their kids.

“I want to tell you something,” Judge William Alsup told the company’s attorneys during the hearing. “You told me that CoreCivic only housed the families together with the children. Mom, Dad, the children, all in one unit. Now, I’m learning for the first time after an hour and a half that, no, after the children had been ripped from their arms, you housed the parents.”

“It reads like a frickin’ Onion headline, the idea that you have to fight a defamation lawsuit to say that prisons separate families.”

Later that day, Alsup dismissed CoreCivic’s lawsuit. “It turns out,” he wrote, “that CoreCivic, Inc., did, in fact, operate detention facilities for parents separated from their children pursuant to the Border Patrol’s family separation policy. Thus, even though CoreCivic did not operate the detention facilities in which the children themselves were housed, CoreCivic did house the other half of the afflicted families or at [least] some of them.” Simon’s statements, he said, were “true enough” under the First Amendment and California defamation law. Alsup also rejected the remainder of the complaint, including CoreCivic’s allegations that Simon also made defamatory statements about its lobbying activities.

“CoreCivic does not and has never operated immigrant detention facilities for children separated from their parents at the border, nor did it lobby for the Trump Administration’s family separation policy or harsher immigration or sentencing laws,” CoreCivic vice president of communications Steve Owen says in an email. The company has notified the court that it plans to appeal Alsup’s ruling. “We look forward to the opportunity to set the record straight,” Owen says. The company’s stock price recently tumbled even further after the election of Joe Biden, who has pledged to end the federal government’s use of private prisons.

“To me,” Simon says, “it reads like a frickin’ Onion headline, the idea that you have to fight a defamation lawsuit to say that prisons separate families. Of course prisons separate families. In every instance.” She plans to stay involved in activism, including pressuring the incoming Biden administration to bring place financial regulations on corporations linked to the criminal justice and immigration systems.

Ms. L was released from Otay Mesa and reunited with her daughter in the spring of 2018. Two and a half years later, later more than 500 other children taken from their parents by the Trump administration have yet to be reunited.