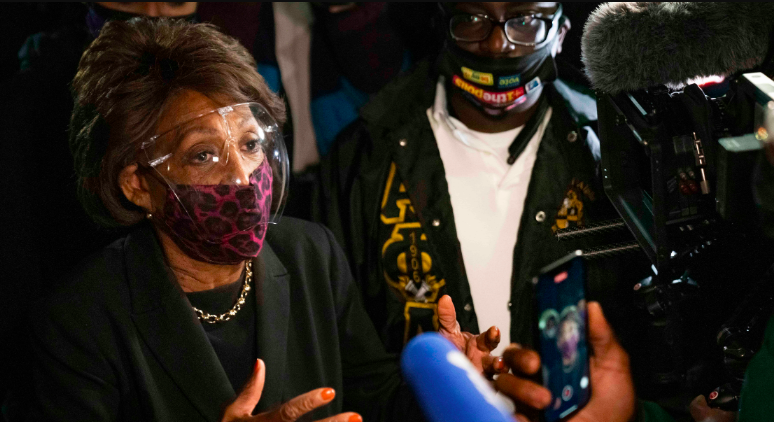 As the country awaits a verdict in the murder trial of Derek Chauvin, the former Minneapolis police officer charged with killing George Floyd, Republicans have pounced on a familiar target: a Black woman.

“This weekend in Minnesota, Maxine Waters broke the law by violating curfew and then incited violence,” House Minority Leader Kevin McCarthy said on Monday. In the same tweet, McCarthy—who in recent months declined to do anything about Rep. Marjorie Taylor Greene (R-Ga.) after social media posts indicating support for murdering top Democrats emerged—also revealed that he was moving to censure Waters over her comments telling protesters to keep up their demonstrations.

Conservatives of all stripes, from Greene to Sen. Ted Cruz, quickly seized on the comments. “Democrats are actively encouraging violence,” the Texas senator said. “They want to tear us apart.”

The attacks are part of a long tradition of Republicans distorting Waters’ remarks and draw on the racist trope of the angry Black woman. They also seem to be part of an effort by Republicans to distract attention from their own extremist rhetoric.

“No, in fact, President Trump used the words ‘peaceful’ when he talked about the statements that he made,” Rep. Steve Scalise told reporters Tuesday when asked if Waters’ comments could be compared to Trump’s repeated incitement ahead of the January 6 Capitol insurrection. “I haven’t heard Maxine saying anything about peacefully protesting. She’s talked about violence.”

But while the demonization of Waters is nothing new, that this latest bout of fake outrage against one of Congress’ most high-profile Black members—in the middle of one of the most consequential police murder trials in recent years—is especially difficult to watch. It’s all but certain, as the country braces for possible unrest following the verdict, that Republicans will continue to point the finger at Waters, accusing a Black woman of promoting any potential violence. And Waters noted as much this week. “Republicans will jump on any word, any line, and try to make it fit their message and their cause for denouncing us and denying us, basically calling us violent,” she told theGrio.

“I am not worried that they’re going to continue to distort what I say,” she continued. “This is who they are and this is how they act. And I’m not going to be bullied by them.”