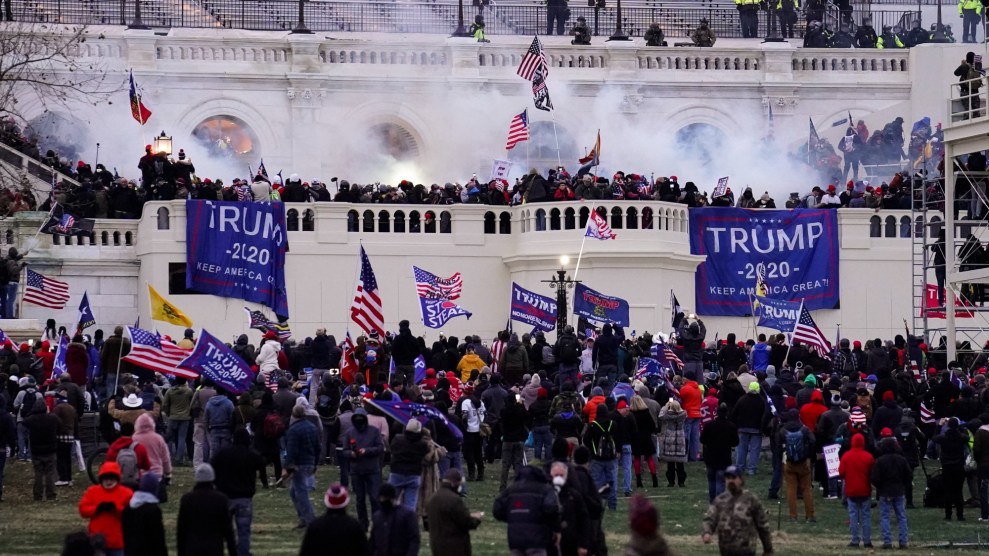 A 25-year veteran of the US Capitol Police faces obstruction of justice charges over allegations that he tried to cover up crimes related to the January 6 insurrection. Federal prosecutors say that the officer warned a man who participated in the attack to delete Facebook posts showing himself inside the Capitol—and that the officer subsequently deleted his own Facebook messages in an effort to cover his tracks.

“[I’]m a capitol police officer who agrees with your political stance,” Michael Angelo Riley told the riot suspect in a January 7 Facebook direct message, according to a grand jury indictment dated October 14. “Take down the part about being in the building[.] they are currently investigating and everyone who was is in the building is going to [be] charged. Just looking out!”

Riley is the first Capitol Police officer to face charges for actions related to January 6. Capitol Police Chief Tom Manger said Riley had been placed on leave. “Obstruction of justice is a very serious allegation,” Manger said in a statement. “The department was notified about this investigation several weeks ago. Upon his arrest, the officer was placed on administrative leave pending the completion of the case.”

Last month, the Capitol Police announced that after an internal investigation, six of its officers would face disciplinary measures for conduct on January 6. The department did not name those officers or say what they did.

Riley, a member of the police K-9 unit, did not personally know the man he was messaging, but both were avid fisherman and members of fishing-related Facebook groups,” prosecutors say.

Prosecutors didn’t name the man Riley warned. But NBC News identified him as Jacob Hiles, a Virginia Beach charter boat captain who pleaded guilty in September to a misdemeanor count of parading, demonstrating, or picketing in a Capitol building. Details of Hiles’ case, including his arrest on January 19, appear to confirm that he is the person that Riley messaged.

The indictment notes that Riley on January 9 had seen a video of the man he messaged “smoking an unknown substance inside the Capitol building.” A January affidavit detailing Hiles’ actions notes that he posted a “selfie”-style video on Facebook on January 6 that showed him smoking an “unidentified substance” in the Capitol earlier that day. “I’m not a smoker AT ALL, but when the cop asks you if you are gonna hit that, I ain’t gonna let it g…” Hiles wrote. (It’s not clear if a police officer actually said that.)

Riley’s initial message led to an exchange of dozens of messages, according to prosecutors. When Hiles said he did not think he had done anything wrong, Riley responded: “The only thing I can see is if you went into the building and they have proof you will be charged.” On January 13, Riley told Hiles: “Get off of social media.”

After Hiles was charged, the men spoke by phone for 23 minutes, according to Riley’s indictment. Following his January 19 arrest, Hiles was interviewed by FBI agents. The next day, he told Riley in a message that the FBI “was very curious that I had been speaking to you if they havent already asked you about me they are gonna. They took my phone and downloaded everything.”

The next day Riley allegedly sent a message to Hiles in which he claimed to have just seen a video of “you in the Capitol smoking weed and acting like a moron. I have to say, I was shocked and dumbfounded.” Riley added had he believed Hiles had lied to him, adding: “I was so mad last night that I deleted all your post [sic], but I wanted to text you this morning and let you know that I will longer be conversing with you.” Prosecutors noted that Riley had known about the video for 12 days and continued to converse amicably after seeing it. The implication appears to be that the feds believe that message was part of an effort by Riley to cover his tracks.