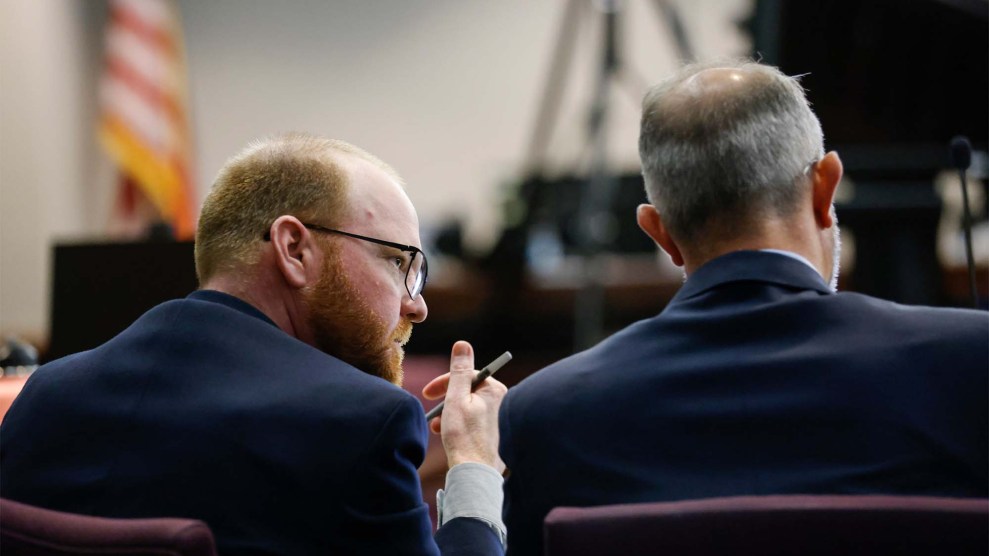 On Friday, opening arguments are set to begin in the trial for the three white men who killed Ahmaud Arbery, a Black man, while he was out on a jog in Georgia. The killing has been likened to a modern-day lynching. In Glynn County, where the trial is taking place, more than a quarter of the population is Black. But the jury selected this week to hear the case will be almost entirely white.

The jury consists of 11 white members and only one Black member. A defense attorney representing one of the three white men on trial—Gregory McMichael, Travis McMichael, and William “Roddie” Bryan Jr.—said he’s happy with that outcome.

On Wednesday, prosecutors accused the defense attorneys of disproportionately striking qualified Black people from the jury and basing some of those strikes solely on race, which would be unconstitutional. Judge Timothy Walmsley agreed that racial bias was at play in the jury selection. “This court has found that there appears to be intentional discrimination,” he said. But, and here’s the kicker: He said the case could proceed anyway. He argued there were constitutional reasons for striking so many Black jurors.

“This court has found that there appears to be intentional discrimination,” Judge Timothy Walmsley said.
Arbery’s mother, Wanda Cooper-Jones, told reporters as she left the courthouse that she was “shocked” to learn that only one Black juror had been seated. “I mean, that was devastating,” she said.
Arbery, 25, was jogging near Brunswick in February 2020 when Gregory McMichael and his son, Travis McMichael, grabbed guns, hopped in a truck, and chased him down. They claimed they went after Arbery because they believed he was responsible for previous burglaries in the neighborhood, and they wanted to conduct a citizen’s arrest under a Georgia law that was enacted during slavery to essentially catch people who ran away from plantations. The McMichaels pulled over in their truck and confronted Arbery, and Travis McMichael shot him during a scuffle, according to cellphone footage from the McMichaels’ neighbor William “Roddie” Bryan Jr., who drove behind them filming the encounter and later hit Arbery with his vehicle.
Police did not arrest the McMichaels and Bryan initially, and the men remained free for more than two months—until the cellphone video leaked online, sparking national outcry. The three defendants are now charged with a slew of crimes, including malice and felony murder, aggravated assault, and false imprisonment. They have pleaded not guilty. If convicted, they could face life in prison.
Jury selection lasted weeks. An enormous number of people, around 1,000, were initially summoned to the jury pool, because the judge and attorneys on both sides worried it would be difficult to find 12 jurors who could be impartial in a case that received so much media attention. Many potential jurors said they had already formed strong opinions about the killing or personally knew the defendants, both valid reasons for them not to participate.
After the court dismissed people who couldn’t be impartial, prosecutors and defense attorneys, following the typical procedure for jury selection, had a chance to strike a certain number of the remaining potential jurors without explaining a reason, using what’s known as a “peremptory challenge.” According to 1986 Supreme Court case called Batson v. Kentucky, a peremptory challenge is unconstitutional if it is motivated by race. When the prosecution accused the defense of basing their decisions on people’s skin color, the defense had to provide another, non-race-based reason for asking those potential jurors to leave.
The problem is, it’s extremely easy to provide another, non-race-based reason, even when race really was the motivating factor. There are so many other easy excuses to choose from: As I’ve reported previously, courts have found it acceptable for attorneys to exclude potential jurors simply because they had bad posture, lived in a dangerous neighborhood, or had a beard.
In the Georgia case, the court heard arguments for more than two hours about why defense attorneys requested to strike eight potential Black jurors. In the end, Judge Walmsley ruled there were valid reasons, beyond race. “All the defense needs to do is provide that legitimate, nondiscriminatory, clear, reasonably specific and related reason,” Walmsley said. The case would proceed as planned, he said, even with just one Black juror.
Bryan’s defense attorney Kevin Gough complained that the jury pool did not include enough “white males born in the South, over 40 years of age, without four-year college degrees.”
It may have been a relief for the white defendants, who, earlier on in the jury selection process, had expressed concern that the jury might not adequately represent them. Last week, Bryan’s defense attorney Kevin Gough complained that the large jury pool did not include enough “white males born in the South, over 40 years of age, without four-year college degrees,” people he referred to as “Bubba” men or “Joe Six Pack.”
“Without meaning to be stereotypical in any way, I do think there is a real question in this case whether that demographic is underrepresented in this jury pool,” Gough said. “And if it is, then we have a problem with that.”
But after the final jury was announced with 11 white people, Jason Sheffield, an attorney for Travis McMichael, said he was pleased. “[T]his community can now decide the pending issues of this indictment,” he said, “and we truly believe that they will do so fairly and in keeping with what we all understand justice to be about.”