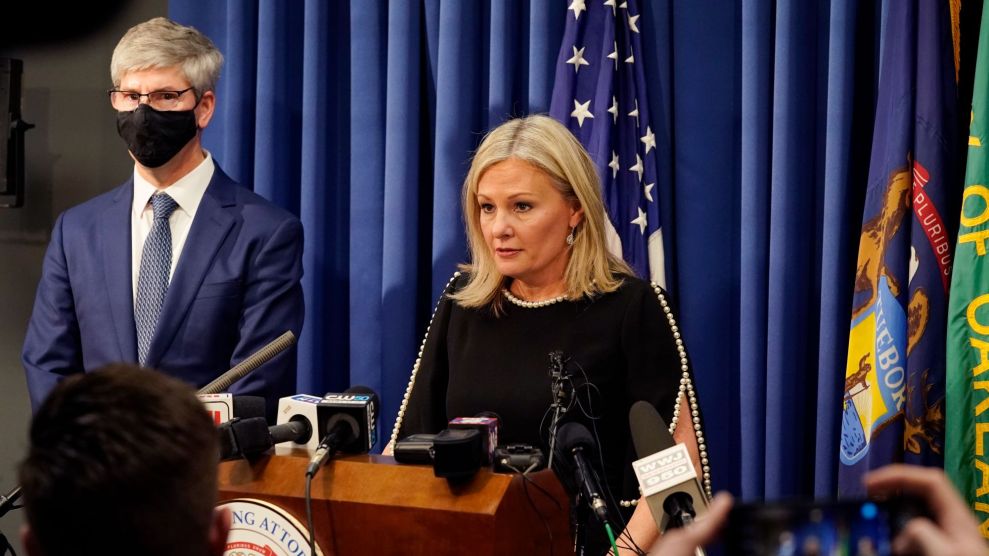 In a rare move, a prosecutor in Oakland County, Michigan, filed involuntary manslaughter charges against the parents of the 15-year-old student who allegedly shot and killed four of his classmates and wounded seven others at Oxford High School. Allison Anderman, director of local policy at the Giffords Law Center to Prevent Gun Violence, told the New York Times that she couldn’t think of another time when the parents of a high-profile mass shooting suspect had been criminally charged in connection to the crime.

On Friday, prosecutor Karen D. McDonald filed four involuntary manslaughter charges against James and Jennifer Crumbley, one for each student killed. In a press conference detailing the reasons for the charge, McDonald said that Ethan and his father, James Crumbley, purchased a Sig Sauer 9mm pistol together from a local gun store on Black Friday. After the purchase, Ethan Crumbley reportedly posted a photo of the weapon to social media with a caption reading “just got my new beauty today” along with a heart emoji. Four days later, he allegedly used it to kill four people and injure seven more.

McDonald alleged that at some point prior to the shooting, a teacher had caught Ethan Crumbley searching for ammunition on his phone during class. Crumbley’s parents didn’t respond to two voicemails and an email from school authorities about the incident, but in text messages with her son, Jennifer Crumbley revealed that she’d learned what had happened, according to McDonald.

“Lol, I’m not mad at you, you have to learn not to get caught,” Jennifer Crumbley allegedly wrote.

Prosecutor alleges parents of Oxford High School shooting suspect left gun unlocked and failed to take action on reports of disturbing behavior at school. The mother allegedly wrote in a text to him after one report: "lol I'm not mad at you, you have to learn not to get caught" pic.twitter.com/BiR9VTu1U7

During the press conference, McDonald also outlined a timeline of key events on the day of the shooting: In the morning, one of Ethan Crumbley’s teachers found a drawing on his desk of a semiautomatic, a bullet, and a bleeding figure that so disturbed her she took a photo of it. The drawing allegedly contained the words, “the thoughts won’t stop, help me” and “blood everywhere.”

James and Jennifer Crumbley were summoned for a meeting with school authorities and their son. The two parents “failed to ask their son if he had his gun with him or where his gun was located and failed to inspect his backpack for the presence of the gun which he had with him,” McDonald said. They also resisted the idea of their son leaving the school.

When the news of the shooting had been made public, Jennifer Crumbley allegedly texted her son: “Ethan, don’t do it.” James Crumbley later called 9-1-1, saying that a gun was missing from his home and that he believed his son may be the shooter, according to McDonald.

McDonald said that the gun was stored unlocked in James and Jennifer Crumbley’s bedroom. But Michigan is one of many states that lacks a law requiring gun owners to lock away their firearms. Gun control advocates have pushed for such statutes, called child-access prevention laws, but have consistently run into strong opposition from guns rights groups like the National Rifle Association, which instead favor safety campaigns aimed at educating children and their parents. In 2017, NRA spokesperson Jennifer Baker said that her organization opposes “one-size fits all government mandates” and claimed that existing laws are enough.

“I have tremendous compassion and empathy for parents who have children struggling,” McDonald said during the press conference. “I am, by no means, saying that an active shooter situation should always result in a criminal prosecution against parents. But the facts of this case are so egregious.”

If convicted, James and Jennifer Crumbley could face up to 15 years in prison.