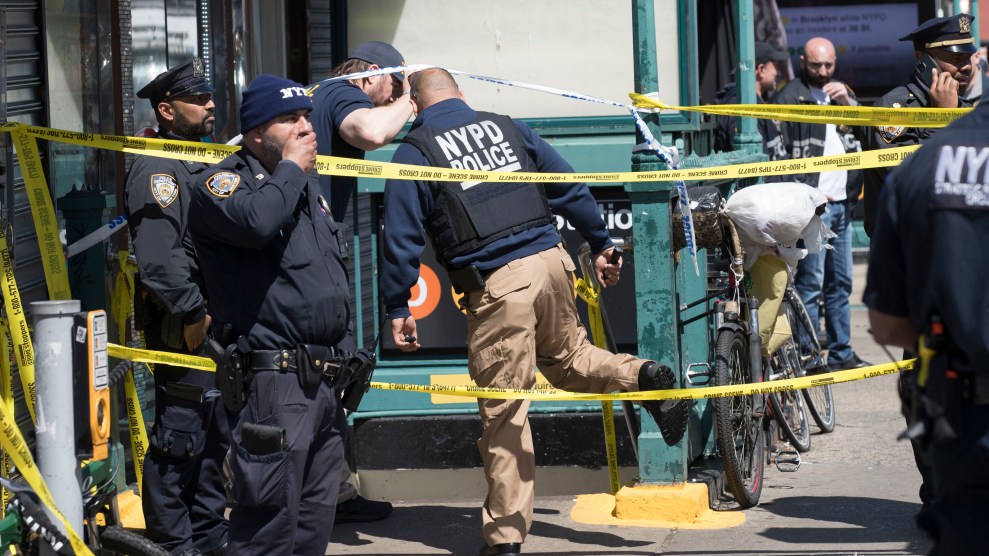 Investigators work at the scene of a shooting at the 36th Street subway station on April 12, 2022, in Brooklyn, New York.Liao Pan/Getty

America’s epidemic of mass shootings continued apace on Tuesday with the harrowing attack on the New York City subway, in which a gunman wounded at least 10 people, and numerous other commuters were injured and thrown into terrifying chaos. The alleged shooter, 62-year-old Frank R. James, was arrested on Wednesday afternoon in lower Manhattan by the NYPD, which stated in a press conference that he had a long criminal record in New York and elsewhere.

The case adds to an increasingly tense national picture of gun violence mixing with political and cultural rage. Videos that James appeared to have posted recently on YouTube—some of which I examined and have since been removed by the platform—included bitter diatribes filled with racial and political grievance, violent misogyny, and justifications about a mass shooting in early April in Sacramento.

Recently, I reported on how political polarization in America has been stewing with pandemic stresses and record gun sales to fuel rising danger. After a lull in the initial year of the pandemic in 2020, keeping up with the mass shootings beat has become busy again lately. This morning, I published a new investigation into the massacre last fall at Oxford High School in Michigan: The circumstances and context of that attack are particularly stark—but you may be surprised to hear that I also have some hopeful news amid the broader story of America’s mass shootings.

My latest reporting on the Oxford High case focuses on how it could have been prevented through the growing method of behavioral threat assessment, the subject of my new book,Trigger Points: Inside the Mission to Stop Mass Shootings in America. Experts in mental health and law enforcement, along with community-based teams specializing in this work throughout the country, continue to learn a great deal about how to thwart mass shootings effectively. The behaviors and circumstances leading up to these planned attacks—and they are indeed planned, from schools and subways to movie theaters and office buildings—offer opportunities to intervene before it’s too late, as I detail further in today’s story about the Oxford High case.

The common theme so often heard in media coverage of mass shootings about perpetrators just “snapping,” as if these are impulsive crimes, is misleading and wrong. That’s one of the big myths about mass shooters that we continue to repeat as these tragedies occur over and over. There is also no such thing as a predictive “profile”: Mass shooters arise from a wide range of backgrounds and circumstances. Nor is mental illness a primary cause in most cases, contrary to popular belief.

The better we begin to really understand the reality of these cases, the more we can do to stop the next ones from happening. That’s the story I tell in my further reporting on the Oxford High tragedy, and in much greater depth in Trigger Points. The scope of this problem goes beyond the vast quantity of loosely regulated firearms in America. That is, of course, an issue at the core of this scourge and the other forms of more common gun violence throughout the country, and must continue to be a focus of systemic change. But additional investment in prevention, including the method of behavioral threat assessment, can also help improve our nation’s prospects for solving this complex and distressing problem.