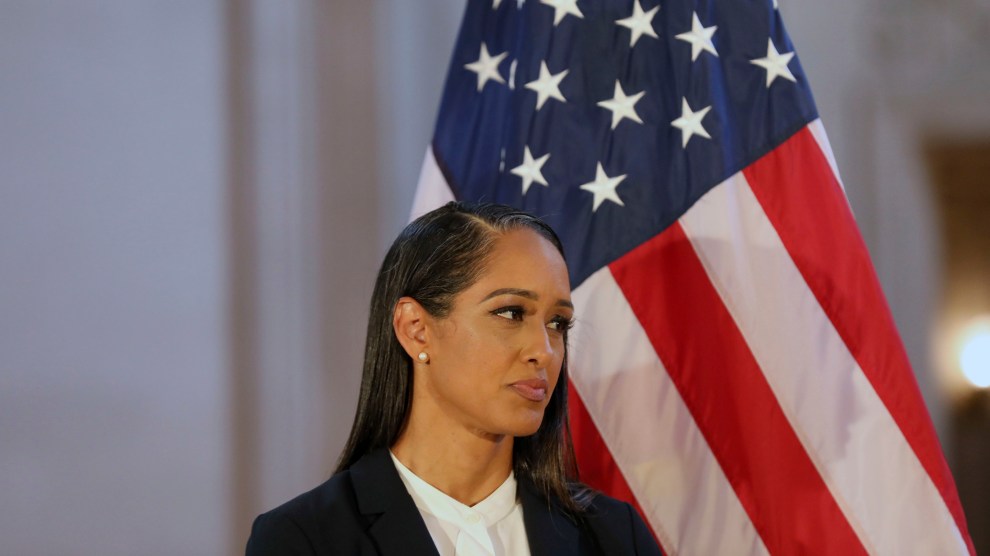 One month after San Francisco voters removed District Attorney Chesa Boudin in a recall election, the city’s mayor has picked an interim replacement who is expected to be tougher on crime and roll back some of Boudin’s most significant reforms.

Brooke Jenkins, 40, is a former prosecutor who resigned from Boudin’s office in 2021 after accusing him of mismanagement and arguing that his policies were allowing criminals to escape punishment. She spent months working to recall Boudin, a former public defender who tried to reduce mass incarceration by diverting more low-level offenders from prison. Jenkins will serve until November, when voters decide if she will finish the rest of the term ending in December 2023.

“As your next district attorney, I will restore accountability and consequences to our criminal justice system here in San Francisco,” Jenkins said at a press conference Thursday. She said her main goals would be ending open-air drug markets in the city and prosecuting hate crimes against Asian Americans, which increased in recent years. She also pledged to focus on property crimes.

“Violence and repeat offenders will no longer be allowed to victimize our city without consequences,” Jenkins added, echoing claims from Boudin’s critics that lawlessness spiraled out of control during his term. As I previously reported, that claim is not supported by data, and San Francisco’s overall violent crime actually decreased during the pandemic to its lowest point since 1985. “We are a city of second chances,” Jenkins said, “but the truth is we have to draw a line with people who choose hate, violence, and a life of crime.”

Despite her focus on tougher penalties, Jenkins, who is Black and Latina, has described herself as a progressive prosecutor. “Holding offenders accountable does not preclude us from moving forward with vital and important reforms to our criminal justice system,” she said Thursday. “I vow to balance both in the pursuit of justice and safety for all.”

But she signaled that she plans to roll back many of the progressive policies that Boudin pursued. Jenkins has said that unlike Boudin, she wants prosecutors to have the power to request cash bail and gang enhancements, which disproportionately penalize low-income people and people of color. She also wants to give prosecutors the discretion to charge juvenile offenders as adults.

Some progressive activists in San Francisco worry about these plans. “San Francisco’s Black community will not be silent nor endorse any Black candidate that is seeking to go back to the 80s and 90s policies of locking everyone up and throwing away the key,” Geoffrea Morris, a community leader who runs a domestic violence organization and whose brother was killed by San Pablo police, said in a statement, according to the San Francisco Chronicle.

“Anyone can say they are a ‘progressive prosecutor’—it’s now a meaningless term,” public defender Ilona Solomon told the Chronicle.

Solomon was the lead defense attorney in the case that inspired Jenkins to resign from Boudin’s office. The defendant in that case, Daniel Gudino, allegedly killed his mother during a mental health crisis in which he believed she was possessed by a demon. As a prosecutor, Jenkins tried to send Gudino to prison for life, even after she failed to have the court declare him mentally sane. She quit after Boudin’s office declined to proceed with a retrial when the jury deadlocked.

Mayor London Breed, in announcing Jenkins’ appointment on Thursday, said she made the decision after speaking with people who opposed and supported the recall. Breed chose from a pool of candidates that included former prosecutor Nancy Tung and Supervisor Catherine Stefani, a vocal supporter of law enforcement. “We have a lot of work to do to ensure that everyone feels safe in our city,” Breed said in a statement. “I know that from day one, Brooke will make sure that not only people are held accountable for the crimes they commit, but will also continue to push forward our work to reform our criminal justice system.”

The police, who often opposed Boudin, seemed happy about her appointment. In a statement, the union representing cops in the city described her as “a qualified, competent and compassionate prosecutor who will allow San Francisco to turn the page from” Boudin, whom the union described as “the previous criminal defense attorney masquerading as the DA.”

When Jenkins runs in the November election, she could very well face off against her former boss; Boudin has not ruled out the possibility of trying to reclaim his seat. Jenkins, when asked whether she expects to see tangible results from her policies by then, told the New York Times that it was difficult to answer the question. “People are going to have to be patient. They’re going to have to temper their expectations,” she said, noting that it would take time to hire prosecutors and implement her ideas.

“No district attorney,” she told the Times, “can snap their fingers and do away with all crime.”