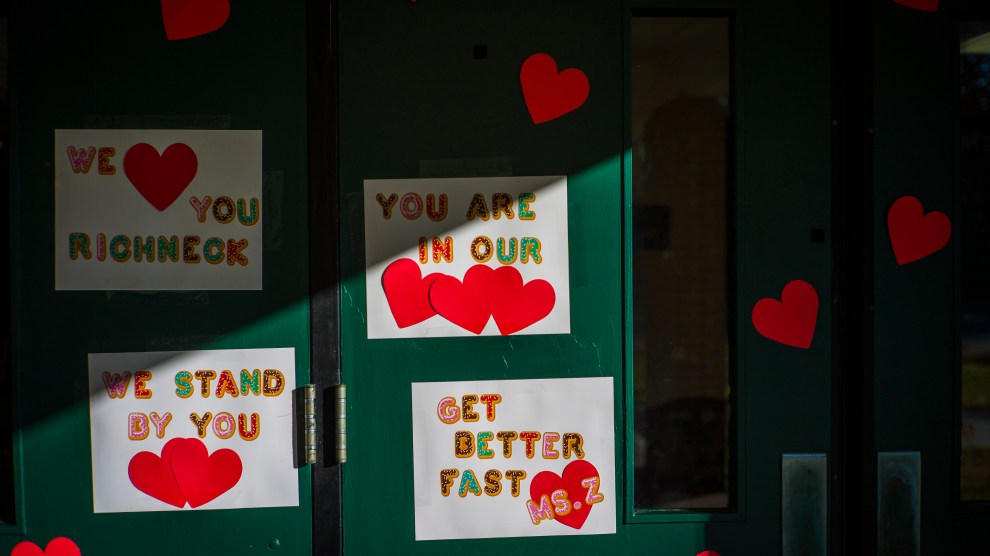 Messages for teacher Abby Zwerner, who was shot by a 6-year-old student, posted at Richneck Elementary School in Newport News, Va., on Jan. 9, 2023.John C. Clark/AP

A shocking act of gun violence took place on Friday at an elementary school in Newport News, Virginia, where a 6-year-old boy used a gun he’d brought to school to shoot his teacher during class. The act was “intentional,” according to local authorities, who have not yet disclosed a possible motive. The teacher, 25-year-old Abigail Zwerner, was wounded in the hand and chest by the single gunshot fired by the boy; she helped evacuate children from her classroom at Richneck Elementary before being transported to a local hospital (where she was in stable condition as of Monday). A school employee restrained the boy until police arrived.

At a press conference on Monday afternoon, Newport News Police Chief Steve Drew revealed new details about the case: The gun used in the shooting, he said, was a Taurus 9mm pistol. It had been legally purchased by the boy’s mother.

The boy and his mother have not been identified publicly by authorities. After interviewing the two of them, Drew told reporters, “We determined that the firearm was in the residence where they lived, and the child obtained that firearm, placed it in his backpack and brought it to school.” His mom had taken him to school on Friday morning, Drew added.

“This is unprecedented, and we’re dealing with a 6-year-old,” he reiterated, noting that police had quickly sought guidance from the commonwealth attorney’s office and agencies specializing in child services. “None of us have a lot of information dealing with something like this,” he said. Using an “emergency custody order,” police transported the boy to a local hospital for a mental health evaluation.

The boy has not been charged with a crime, and police are still investigating specifically how he got possession of the gun. Authorities have not yet decided whether to charge anyone else in connection with the shooting, Drew said.

Virginia has no laws requiring gun owners to lock up or otherwise safely store unattended firearms. According to the Giffords Law Center, the state “prohibits anyone from recklessly leaving a loaded, unsecured firearm in such a manner as to endanger the life or limb of any child under the age of 14.” (There does not appear to be any law addressing a potential adult victim at the hands of a child.) It is also unlawful in Virginia “for any person knowingly to authorize a child under the age of 12 to use a firearm except when the child is under the supervision of an adult.”

Drew emphasized that the tragedy on Friday was not an active-shooter situation (a comment that in its own right underscored the astonishing age of the shooter) and was contained to the single classroom. Yet, the provenance of the gun is a disturbing reminder that school shootings frequently are carried out with weapons that kids obtain from their own homes. Among the many examples is another particularly grim recent case: the mass shooting at Oxford High School in Michigan.

Children accidentally or intentionally using firearms to shoot people remains an under-reported issue in the United States. Such tragedy occurs hundreds of times a year, as I first documented in an investigation a decade ago.

Virginia has been a leader in the emerging violence-prevention work of behavioral threat assessment, but it has also been an epicenter for high-profile disasters: the Virginia Tech massacre in 2007; the on-camera murder of two TV journalists in Roanoke in 2015; and several workplace mass shootings, including at a government office in Virginia Beach in 2019 and at a Walmart in Chesapeake late last year. The Charlottesville community is still reeling from the shooting in November at the University of Virginia that took the lives of three football players.

Now, a 6-year-old pulling the trigger marks the latest on the list.