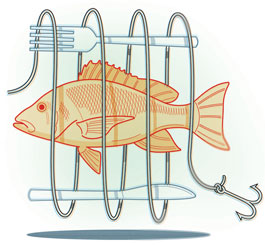 WE’RE ALL AT RISK, when it comes to fish, and not just of long-term mercury poisoning, but of the more immediate hazard familiar to anyone who has tried to buy seafood recently—anyone who reads a newspaper, that is. I refer to the moral and practical decision-making paralysis brought on by an almost laughable set of contradictions. The very same fatty tissues in which mercury builds up, for example, in the big fish that eat the little fish, pack loads of omega-3 fatty acids, the health elixir that has been shown to reduce the risk of cardiovascular disease and lower blood pressure, and may even stave off certain cancers and ease depression. We should all eat fish all the time, in other words—except that we should try not to eat fish.

Even more crippling is the environmental contradiction: Buy an ecologically sound seafood like wild-caught Alaskan salmon, and you invest in the intelligent management not only of that fishery but of an entire ecosystem: clean water and fishing restrictions in coastal waters, healthy wetlands where salmon congregate on their way home to their ancestral streams that run free of dams and irresponsible development, and pure mountain lakes where the salmon spawn and die. But if you buy something labeled “Atlantic salmon” instead, you’ve bought a fish farmed in vast, crowded pens—environments that breed parasites and diseases devastating to wild salmon populations, that prohibit the active life that generates omega-3 fatty acids in the first place, and that require adding food coloring to feed pellets, just to give the fish flesh the pink blush that comes from eating krill and that consumers expect in their salmon.

The problem’s not just with salmon, either. The jet-age global economy tempts us with fish from all over the world and therefore with sides to choose in a dizzying array of environmental crises: plummeting fish stocks, vanishing species, nets that kill everything in their path, and longlines that hook turtles and sharks along with the tuna. If fish weren’t so wonderful to eat, we’d probably just throw up our hands and order the free-range steak instead. But seafood is not only delicious and great for our health—when not laced with heavy metals—it’s the one remaining widely consumed wild protein on this planet, the last part of the industrial food supply that involves humans heading out into (or onto, in this case) an expansive wilderness, catching wild animals, and bringing them home to market. If the very notion turns your stomach, fair enough. But dishes like poached Alaskan halibut in beurre blanc and bouillabaisse prickling with crab legs give me a visceral joy, a sense of tactile interpenetration with the natural world. And that means I’m in the same predicament as everyone else: I love eating fish, I love what omega-3s are apparently doing for my health, I love thinking about wild Alaska, but I don’t want to poison myself while mindlessly supporting the ongoing destruction of entire fish populations.

The only way out, as far as I can tell, is to become an educated consumer in yet another realm of life—to become, in other words, one of those annoying diners who ask the waiter, “Excuse me, but where exactly is the pepper-grilled cod from? It’s not from the Atlantic, is it?” Some of the yeas and nays are easy enough to remember: anything from Alaska, good; farmed salmon, bad. Teeny tiny fish, good (anchovies, sardines, and herring, all low in mercury and full of omega-3s); big predator fish, bad (shark, marlin, swordfish, and tuna, all endangered and full of mercury to boot). But I have pretty limited fact-retention, so beyond that, I rely on a buyer’s guide. (See seafoodwatch.org.) When in doubt, I whip it out, and I feel great about catfish and crawfish, Pacific oysters and Dungeness crab, domestically farmed tilapia and Manila clams, and I remember to steer clear of grouper and snapper, Chilean sea bass (its other aliases include Patagonian toothfish, Antarctic cod, and icefish), orange roughy (sounds like a synthetic fabric), rockfish and tilefish (sound like construction materials), Atlantic cod and halibut (sound like The Perfect Storm).

To make matters even easier, Turtle Island Restoration Network’s gotmercury.org website allows you to calculate the risk of each can of tuna or piece of toro sushi, while ecofish.com lists markets and restaurants that offer its ecopositive seafood as well as recipes from green-minded celebrity chefs. The Seafood Choices Alliance (seafoodchoices.com) lets you search its list of members to find environmentally enlightened seafood markets, caterers, and restaurants throughout the United States, giving the nod to places like Monterey Fish Market in Berkeley, California, and Water Grill in Los Angeles, where the Ecuadorian mahimahi comes with smoked eel pot stickers. New York’s Beppe, in the Flatiron District, serves pan-seared black cod with an agrodolce glaze, and San Francisco’s Hayes Street Grill proudly announces on its website that “Steve Fitz, our sand dab fisherman, is able to fish again as a result of public outcry by restaurants, fish suppliers like Monterey Fish, and ocean environmental groups who have convinced regulators to allow his ecological Scottish seine technique to be exempted from a ban that affects the dab grounds. What a relief!”

Needless to say, the relief is mutual, because the one sure thing is that we should all keep eating seafood. Even if it just means steaming a pot of mussels in white wine and garlic in our own kitchens and dipping a little crusty bread in the broth, there’s simply no better way to be transported to a briny seacoast where the breeze blows clean and the world seems, at least for the duration of a good dinner, a lot less complicated than it really is.