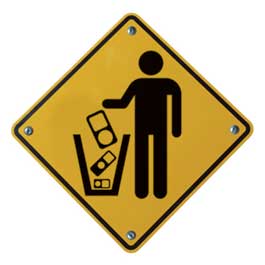 Good for you. The lesson of how VHS made Betamax obsolete in the ’80s is still part of your folk memory, so you didn’t buy a Blu-ray or hd dvd player last December. As a video refusenik, unsure which format would win the dvd wars, you demonstrated a sophisticated appreciation of product obsolescence and decided not to buy a new device until you knew it would play movies for years to come. Or perhaps you’re still smarting from being burned again and again by audio obsolescence: Albums went to eight-tracks, and then to cassettes, before CDs were introduced. With each change, audiophiles repurchased the classics.

These days, the champion of audio obsolescence is Apple, which successfully combined its iPod with a unique digital format (aac). By embracing a non-MP3 format, Apple locked you into its world. Now, when your iPod breaks, you have a library of music that you can’t use on other players. You have to buy another iPod. Enjoy your music for as long as your iPods lasts. Apple says that will be for years; for us nitpickers that means about 13 months.

Yes, the secret is out. After 13 months of heavy use, the lithium-ion battery of the iPod can lose more than half of its functionality. You’ll find that even though you recharge more often, your iPod can fade out by the end of a long day. Simply put, even though an iPod can cost you $350, these digital music players are designed to be disposable.

Then why not get a new battery? Good idea. But Apple deliberately seals the battery inside the iPod. Replacement costs $65 (a new 1-gig iPod shuffle costs $79), takes several weeks, and worst of all—because the new battery comes in a refurbished and wiped-clean iPod—you’ll lose all your songs.

Or you can say, “Screw Apple,” opt for an aftermarket battery kit, and repair your own machine. It’s easy, cheaper, and more fun than having Apple fix it. The kit from Sonnet Inc. (sonnettech.com) is especially useful. For $19.95 it includes a special iPod opening tool, but best of all it comes with a dvd showing exactly what to do. If you’re not into do-it-yourself, you could send your iPod to any one of the outfits such as Small Dog Electronics (smalldog.com) that repair or resell these digital throwaways.

But battery decline is only one way that Apple encourages speedy obsolescence. Another is by introducing spiffy new models shortly after you’ve acquired the latest thing. December’s iPod looks a little duller since the introduction of the iPhone, doesn’t it? The screen is probably already scratched. Time, then, to let you know about the three models of next-generation iPods that, scuttlebutt says, will be available this year. As Steve Jobs said, “If you…want the latest and greatest…you have to buy a new iPod at least once a year.” Yes, this is from the same man who wants you to know that “Apple has a really strong environmental policy.”

The fact that Apple’s cofounder and ceo seems positively gleeful about the amount of waste his product generates is alarming, since the iPod is designed to be all too easy to throw away. Of course, if you live near an Apple store, you can recycle your obsolete iPod for free. But then, the iPod is only one small aspect of an avalanche of electronic waste that will soon overwhelm America.

Microsoft’s recent release of its memory-hogging, graphics-intense Vista operating system will effectively render many existing PCs obsolete. Industry analysts say that 95 percent of the household PCs in Great Britain won’t be able to run all of Vista’s bells and whistles, and that only a third of laptops currently sold will be able to meet even its minimum requirements. Sooner or later they will all be junked. By 2009, 300 million analog TVs in the United States will also become obsolete when America’s broadcast signal format changes to digital. (Sure, you will be able to get a set-top converter box—yet another gadget—but marketers are salivating at the chance to persuade you to buy a new TV.) Meanwhile, in 2007 the 3 billionth cell phone—with its life span of about 18 months—will roll off an assembly line somewhere in Asia. In this context, the disposability of the iPod and the fight among manufacturers over dvd formats seem irresponsible if not criminally negligent. iPods are crammed with lead, mercury, and flame retardant, and the 70 million already sold represent a sizable amount of toxic chemicals that seep through landfills and contaminate groundwater. Electronic waste accounts for 2 percent of America’s trash in landfills but 70 percent of its toxic garbage. In 2003 alone, 3 million tons of e-waste were generated in the United States.

The good news is that Americans are reacting to the greedy tactics of force-fed obsolescence in the best possible way. Few people bought a new-format dvd player for Christmas, and disillusioned consumers are fighting e-waste. Last December, Greenpeace activists bathed Apple’s Fifth Avenue New York store in green floodlights to publicize the group’s “Green My Apple” campaign that is aimed at shaming the iPod manufacturer into becoming more environmentally responsible.

My best advice is to sit on your money for six months and think about what you really need. It will cost you at least $200 to replace your iPod, $1,000 or more to replace your PC, and between $400 and $1,500 to upgrade your current dvd player. Take that money and buy something durable, something that will increase in value. Shares in a company like Apple might do the trick. There’s no planned obsolescence for rapacious capitalism.