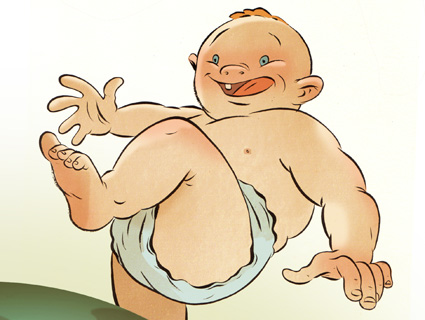 72 percent of American adults have children.

Between 2000 and 2050, the US will add 114 million kids to its population. Africa will add 1.2 billion—but their respective CO2 emissions will be the same.

One American child generates as much CO2 as 106 Haitian kids.

Zahara Jolie-Pitt will produce 45,000 pounds of CO2 yearly, compared with 221 pounds if she still lived in Ethiopia.

A typical baby goes through 3,800 disposable diapers in her first 2.5 years.

96 percent of American babies wear disposable diapers. In China, only 6 percent do. In India, 2 percent.

For $20, British parents can have seven trees planted to offset the 1,430 pounds of greenhouse gases generated by their child’s first 2.5 years of nappies.

Civil conflict is twice as likely to occur in countries where young adults make up more than 40 percent of the population.

In 2007, a Hungarian couple had 300 trees planted to offset their newborn’s lifetime carbon footprint.

Over his/her lifetime, each American born in the 1990s will produce an average of:

Citizens of the Russian city of Ulyanovsk get September 12 off to “conceive a patriot.”

Due to its low birthrate, Singapore runs a dating program called LoveByte that promotes “the importance of marriage and family, and the need to start early.”

In 2005, Pope Benedict XVI called for tax incentives for large families. Last fall, he vowed to “recreate a strong alliance between man and Earth.”

In March, a Vatican bishop announced seven new mortal sins, including causing pollution and being obscenely wealthy. According to news reports, the bishop said the new evils were linked to “the unstoppable process of globalization.”

Only 45 percent of SUV owners in the US have two kids or more.

US school buses—95 percent of which run on diesel—release 3,700 tons of soot and 11 million tons of greenhouse gases a year. School bus exhaust is linked to higher rates of asthma and lung cancer.

It would take up to 223 trees to offset the CO2 produced by a child watching three hours of TV every day for 18 years.

19 percent of US children under the age of 1 have TVs in their rooms.

Asked how many times they’d begged their parents for a product they’d seen advertised, 11 percent of tweens answered “more than 50.”

In order to do as much laundry as Walt Disney World does in a single day, you’d have to do a load a day for 44 years.

By the time she is 18, an American child in a middle-income family will have eaten her way through $33,330 of food.

The average student trashes up to 90 pounds of lunch-box leftovers and packaging each year.

In 2007, Julia Roberts told Vanity Fair that the “highest high” would be “growing our food that I then make, and then composting and growing more.”

In 2004, she paid Hollywood’s Cedars-Sinai Hospital $1,700 a night for a deluxe maternity suite with valets, a chef, security staff, and salon service.

The Voluntary Human Extinction Movement (VHEMT—pronounced “vehement”) advocates nonprocreation instead of suicide because “there’s no way we could convince enough people to kill themselves.