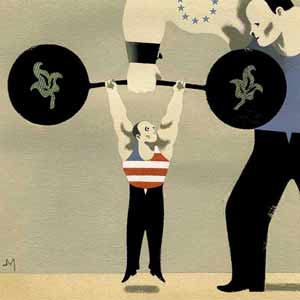 
Five years ago it would have been virtually impossible to measure the potential impacts of widespread sustainable practices on the United States. There was no country with an economy as vast and complicated as ours that had tried them, nobody to whom we could look for comparison. But now, at last, we have our test case—the European Union, with its 27 countries, 495 million people, and increasing commitment to balancing environmental standards and business profits. And we have a control group: us, the United States, clinging to the status quo. What do the early results look like?

In 2000 and 2001, after years of heated debate, the EU committed to an economic growth plan that placed sustainability alongside competitiveness. Since then, the union has banned substances known to cause cancer, birth defects, and reproductive problems from an array of consumer goods. It has mandated that materials in most packaging, electronics, and even automobiles be recyclable; demanded that manufacturers disclose toxicity data on tens of thousands of chemicals; and imposed increasingly stringent energy standards on businesses and individuals.

Washington lobbied hard to foil these initiatives. Beginning in 2002, when a far-reaching toxics-disclosure law known as reach was on the table, the State Department issued a series of cables claiming the measures would “present obstacles to trade” and cost US producers “tens of billions of dollars” in lost exports. The Commerce Department warned that the effort could result in “hundreds of thousands of Americans…thrown out of their jobs.” The US filed a protest with the World Trade Organization; legions of industry and administration lobbyists descended on the EU capital in Brussels. C. Boyden Grey, then the US ambassador to the EU (also a longtime business representative in Washington and one of the architects of deregulation in the 1980s), told me at the time that Europe’s initiatives would “choke economic growth” and “be hell for American multinationals.” Europe, in a nutshell, was headed for catastrophe.

Half a decade later, in 2007, the growth rate in the gdp of the 15 core EU members was 2.7 percent, 20 percent better than that of the US. And according to a 2007 assessment for the Directorate-General for the Environment, the EU equivalent of the epa, the “main impact” of the reforms has been “to shift resources from polluting sectors to more environmentally friendly sectors.” Areas of job growth include pollution control, sustainable energy, waste and water management, recycling, and ecotourism.

Studies have concluded that industry, in fighting the new rules, exaggerated the cost of complying; outlays were often half what was predicted, and even in high-polluting sectors such as electric power and automobile manufacturing amounted to a “relatively low” 2 percent of production value. “There is no evidence,” concluded an EU assessment, “that environmental policy has a material effect on the competitiveness of Europe’s manufacturing sectors or leads to relocation.”

Instead, the standards have given rise to entire new industries—not just in obvious arenas, such as Germany’s thriving wind-turbine sector, but in unglamorous ones such as waste disposal. More than 55 percent of packaging materials are now being recycled in the EU, and thousands of businesses have arisen to process that waste and produce alternatives such as plant-based, compostable plastics.

And what of the fear that Brussels bureaucrats would squelch innovation? Last year Germany’s Federal Environment Agency surveyed the heads of 90 leading companies across the EU. The study found leaders extolling the need for regulation: “Our interview partners pull no punches,” it concluded. “By all accounts, political instruments are needed to drive environmental innovation onward.” The new standards, the executives said, had created a level playing field, thus ensuring both fairness and economies of scale.

Americans have become the accidental beneficiaries of Europe’s regulations as US companies discover that they can’t afford to disregard our largest trading partner. The electronics industry, for example, faces EU requirements to phase out an array of toxic metals and substances and make its products 80 percent recyclable; in Europe, electronics firms must also maintain “take-back” stations in stores where customers can return obsolete products. The industry has been forced to take responsibility for its products and has been replacing toxic metals like lead with more benign substitutes like tin.

Michael Kirschner, a high-tech design engineer in San Francisco who consults with US electronics firms looking to meet EU standards, told me that most of the changes have been easy and “done in a non-manpower-intensive manner.” Alternatives have been available for years, he said—it just took someone to demand that they be used. Now the industry is redesigning products globally according to the EU’s standards.

Similarly, chemical companies face a December deadline imposed by Europe’s new reach law to register their products so they can be evaluated for their health effects. Dow Chemical and hundreds of other US companies are beginning to turn over information that they’ve fought to keep private in the US, where 90 percent of the chemicals on the market today have not been reviewed for toxicity. Now that assessment will happen, in Europe.

Some 30,000 chemicals are expected to be screened in the next 11 years, and the prospect has led some companies to make sober calculations, says Ethel Forsberg, director-general of the Swedish Chemicals Agency. “They’re asking, ‘Is it worth the effort to register a chemical, provide all the data? How important is this substance to us?'”

Forsberg says Akzo Nobel, one of Europe’s largest chemical and paint companies, dropped 40 substances from its catalog after determining that the authorization process wasn’t worth the effort. In the long run, reach could lead to the elimination of numerous toxic chemicals not just in Europe, but worldwide.

The cosmetics industry, facing a separate regulation banning chemicals that cause cancer, birth defects, and reproductive problems, has also started to find alternatives. And toy makers are getting by without toxic plastic softeners, called phthalates, which are no longer permitted. While researching my book on Europe’s new laws, I had trouble finding a single analyst who would say the nine-year-old phthalate ban had had any effect whatever on the toy industry’s bottom line. And two years after the restrictions on cosmetics ingredients took effect in March 2005, an EU study reported that cosmetics sales across the Union had risen 2.2 percent from 2000 to 2006, while the US saw a decline in sales of 3.8 percent.

Key to Europe’s new approach is the rising knowledge of what current industrial production really costs, with tens of billions of dollars in public health expenses, cleanup, and other environmental liabilities. The Europeans are trying to shift this burden from society—i.e. taxpayers—onto industry itself, giving it both a legal mandate and an economic incentive to be more environmentally responsible.

Perhaps nowhere is this rebalancing of cost and profit more apparent than in the energy industry. According to Cary Krosinsky of the international environmental accounting firm TruCost, which has been monitoring publicly traded European firms, “companies that are most energy efficient are beginning to outperform their competitors that are not.” In the US, he notes, many companies were caught off guard by rising energy costs, and few are prepared for the carbon restrictions that will come when the US finally engages in the Kyoto process.

Meanwhile, in Europe, renewable-energy technologies that were once government subsidized—including wind and solar—have blossomed into multibillion-dollar industries that dominate overseas markets. And Europe is exporting its laws as well: Where once the US was the world’s leader in environmental regulation, now the EU standards are becoming models for emerging economies like Korea, Brazil, and even China. This gives European firms a built-in advantage selling to those economies. When cosmetics, toys, and other products that have undergone toxic screening compete against those that have not, which will consumers choose?

Though results from the European experiment are hardly conclusive (and many environmentalists are disappointed that the reforms haven’t gone further), the approach does suggest a counterweight to the Kabuki-like repetitions of US environmental debates, with greens on one side and industry on the other. It’s the struggle to reconcile these two forces that makes the EU’s venture such a provocative challenge to the US.