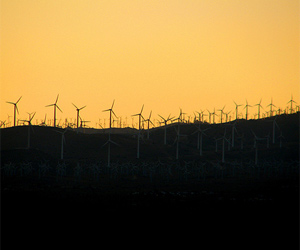 the ads are startling. Standing before a windswept field, Texas oil billionaire T. Boone Pickens declares that a fifth of our electricity should come from wind in 10 years and natural gas should fuel our cars. But there’s more to the conversion than meets the eye. While Pickens plans to spend $10 billion to erect the world’s largest wind farm in West Texas and another $2 billion for the power lines to connect it to Dallas, he has also proposed using the same right of way to bring water from the Ogallala aquifer to cities downstate. (The pipeline is on hold until he finds a buyer.) “The wind is meant to sweeten the deal,” Warren Chisum, the area’s Republican State representative, told Business Week. “The big money for Pickens is in the water.” And in California, a Pickens company that builds natural gas filling stations is the main backer of a ballot measure to “enhance California’s energy independence” by offering $2.9 billion in rebates for those who buy alternative-fuel vehicles. “He’s going to try to control the channel” of natural gas distribution, says Anthony Rubenstein, founder of Californians for Clean Energy, who opposes the measure. “This is just a different version of the same deal he’s always done.”