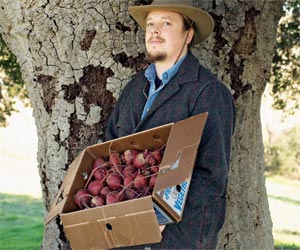 over shiitake quiche and fresh carrot juice, Tim Galarneau describes how he has set his sights on that all-American bastion of bad food: the college cafeteria. The ponytailed, slightly potbellied 29-year-old is a cofounder of the Real Food Challenge, a national campaign to convince 1,000 universities and colleges to buy 20 percent of their food from sustainable sources by 2020. He envisions a day when mystery meat and other institutional staples will be replaced by “real food,” like “a grab-and-go organic regional salad or an organic cookie.”

As the Alice Waters of a burgeoning movement of campus foodies, Galarneau talks earnestly about “food systems” and “avenues of privilege” and casually name-drops Wendell Berry and Vandana Shiva. At a brunch with other dining-hall activists, Galarneau recounts his earlier life as a soda-chugging fast-food junkie growing up in upstate New York. When he was 10, he tried tri-tip beef at his uncle’s ranch on California’s Central Coast. “I just remember all those flavors exploding in my mouth that evening and wondering, What is this? Is this meat, even?” he recalls. “I realized there was something more to food than what I grew up with.” When he was 19, he worked on the ranch and lost 60 pounds. (“It’s the total opposite of the freshman 15!” observes a brunchmate.)

In 2002, Galarneau enrolled at the University of California-Santa Cruz and joined Students for Organic Solutions. After the food-service contractor balked at the idea of going organic, students marched on the chancellor’s office, and the school decided to bring its dining services in-house and gradually go all organic. Last year, about one-quarter of its produce was organic. The school has offset its higher food costs in part by ditching cafeteria trays; Galarneau calculates that making diners take a few extra trips for plates and silverware means annually saving up to $500,000 that once went to washing and replacing trays.

Other schools are also changing their meal plans: Some 150 buy locally grown food, including big schools like the University of Wisconsin-Madison. Stanford gets at least a tenth of its produce through a local program that trains farmworkers as organic farmers. The 10-campus University of California system is considering going 20 percent local and organic by 2020.

Galarneau’s also looking beyond the quad, trying to infuse some new blood into food-advocacy groups that have traditionally catered to older, more affluent eaters. Josh Viertel, the 31-year-old president of Slow Food usa and a former campus food activist, says young people are now his movement’s fastest-growing demographic. “It’s just this incredible outpouring of energy to do the right thing,” he says.