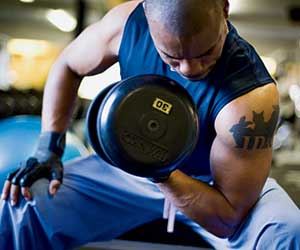 The natural olympia is one of the pharmaceutical-free-bodybuilding circuit’s premier contests, and even without steroids, its competitors look less like men than ideas of men as imagined by comic book artists—with rough-hewn backs and abdomens like stamped iron panels. As the annual event gets under way in a ballroom at an airport hotel outside San Francisco, gaggles of these impossibly beefy men strip down to Speedos and skimpy “posing trunks” backstage. They lather themselves with Dream Tan, their skin colors gradually homogenizing into a slim range of black and bronze. They line up in front of mirrors and rehearse their poses. From time to time, someone takes a pull of beef jerky.

Kenneth Williams sits in the audience, waiting for his turn to preen. The 41-year-old is irrepressibly handsome, with a mayoral smile, shaved head, and tiny triangular tattoo under his left eye. At 6 feet, 190 pounds, he’s “still in the baby stage”; he hopes to gain another 25 pounds. After a four-year hiatus from bodybuilding, he’s spent the last seven months resculpting his musculature—all on a diet of fruits, vegetables, seeds, nuts, legumes, and lots of soy protein.

In a feat that he claims “shocked the world,” Williams placed third in the novice division of the Natural Olympia in 2004, becoming a major figure in the exceedingly minor subculture of vegan bodybuilding. So far, just a few vegans have infiltrated the elite levels of professional sports, such as Kansas City Chiefs tight end Tony Gonzalez, the former Atlanta Hawks guard Salim Stoudamire, and Ultimate Fighting Championship bruiser Mac Danzig. Williams is on a mission to inflate his body into a bulging rejoinder to the myth that you can’t build muscle on a plant-based diet. “If you think of a vegan,” he says, “you think of someone who is skinny and frail, who has issues. A tree hugger. Smells funny. I’m putting the breath of life back into people. I’m out to save lives.”

Williams is also out for fame—huge, ridiculous fame, and all the money and influence that come with athletic stardom. “The legend of Kenneth Williams” is not a phrase he is uncomfortable using. It’s only a matter of time, Williams believes, before big companies realize what a “conscious athlete” can do for their brand. “This is what I want: $10 million with $2 million cash in hand,” Williams told me a few days before the Natural Olympia. “Imagine ‘Nike Natural.’ When Nike gives me a deal, I’ll outsell Michael Jordan.” Then he pitched me his ideas for hybrid car commercials.

When the “Open Men Tall” class is announced, Williams and 11 other competitors file onto the stage, toe a yellow line, and follow a monotonous cycle of commands: “Quarter turn to the right…Abdominals with one leg extended…Lat spread…Face front.” Bodybuilding is about exhibiting muscles, not using them. Thus the 20-minute series of poses that isolate parts of the anatomy while a long table of judges, like usda inspectors, silently grade the meat in front of them.

Williams, far stage right, transitions fluidly between poses, almost tai chi-like. He is impressively chiseled, but it’s impossible not to notice that he’s dramatically smaller and less defined than nearly everyone else. When a Briton with angel-white hair assumes the signature “pump you up” pose, called “crab most muscular,” it looks like he’s wearing a rubber strongman suit. Williams, like many bodybuilders, says he doesn’t know his own measurements, but it looks like his chest is a good 12 inches smaller than the 50-inch ones around him. He is fit, yes. But the former arena football player and firefighter looks like a mere underwear model among titans.

There’s a certain Neolithic simplicity to building muscle by devouring the muscle of another living thing. For example, Dexter “The Blade” Jackson, last year’s Mr. Olympia and a three-time Arnold Classic champion, routinely bookends a day of steak and chicken eating with 10 egg whites. (“My metabolism is very special,” he notes.) Meat is such an obvious delivery device for protein that bodybuilders often use the two words interchangeably. When I tell Jackson that I am writing about a vegan bodybuilder, he is incredulous: “There’s no way you’d be a pro bodybuilder without meat. I’ve never heard of anyone who doesn’t eat protein.”

“I can’t think of any reason why muscle can’t be built on a vegan diet,” says nutrition professor Marion Nestle, the author of What to Eat. Going vegan, she explains, should have no effect on the performance of normal athletes, provided they eat a balanced diet. But bodybuilders’ diets are anything but balanced: When they’re bulking up, they may consume between 1.5 and 2 grams of protein per pound of body weight per day. That’s a ridiculous amount, Nestle says, about twice what’s recommended for strength-training athletes and enough to cause chronic kidney problems. And because plant-based sources of protein are generally far less concentrated than animal sources, a vegan muscleman must eat even more food (or protein powder) than a carnivore. Nestle says the thought of protein-pounding bodybuilders, vegan or not, “makes me want to throw up just to think about it.”

It was at 3 a.m. five years ago that, while fixing a middle-of-the-night meal, Williams “had the awakening.” “I had two pieces of fried chicken, rice, and salad,” he recalls. For some reason, he couldn’t stop glaring at the chicken. “I was thinking about all the killing and the destruction going on in the world. And I looked down at that chicken and said, ‘I’m eating death, and I don’t even know why.'” He scraped the meat off his plate and went back to sleep a changed man.

He had never heard the word “vegan” before. All he knew was, “The spirit told me, ‘Nothing from an animal. You don’t eat nothing from an animal until you find out what’s going on.'” He entered the 2004 Natural Olympia to prove a point to his meat-loving gym buddies, “not knowing,” as he puts it, “that the stardom was just around the corner.”

Elliot Katz, president of the Bay Area-based animal rights group In Defense of Animals (ida), heard about Williams’ feat and started going to local gyms, asking if anyone knew the vegan bodybuilder. One gargantuan fellow, Katz remembers, told him, “There’s no such thing.”

Katz eventually found Williams and made him the poster boy for a campaign with the catchphrase “Go Vegan and No Body Gets Hurt.” Pictures of Williams balancing a yellow chick on his deltoid or hoisting a massive wicker cornucopia of fruits and vegetables appeared on billboards and in vegetarian magazines. He went to animal rights conventions and hosted 52 episodes of Undercover TV, which featured footage of animal abuse inside factory farms, rodeos, and zoos. After a four-year break from competition, early last year, he realized the best way to continue his vegan evangelism. “The universe said, ‘Ken, it’s time to get back into bodybuilding.'”

We popped into ida‘s Marin County offices, where Williams wanted me to meet Katz, whom he now considers a mentor. (After some catching up, Williams helped put a heavy wooden desk back against the wall; a couple of employees had dragged it out to rescue a potato bug.) Katz told me he sees Williams as the clearest contradiction to the assumption that “if you’re a vegan, you’re just this weakling kind of a thing.”

Williams generally eats between 210 and 250 grams of protein a day—what you’d find in about 2.5 pounds of lean top sirloin. He eats six or seven meals daily, and a few mornings before the Olympia, I watched him prepare his second breakfast. He made a shake: water, 50 grams of soy protein, and three supplement powders made by HealthForce Nutritionals, his sponsor. The drink looked like pesto and tasted like a forest floor, but Williams seemed to genuinely enjoy it. He has three of these a day, supplementing a diet of tofu, red and black beans, nuts, lentils, and leafy greens like kale.

Bodybuilders generally spend three to four months “cutting up” before a competition—having blown up muscle, they now whittle away everything else. In the week before a show, this sculpting process intensifies, as they reduce their sodium intake and gradually cut back on water. “You’re trying to drain out all the excess water and get paper-thin and dry,” explains Williams, who took an herbal diuretic for two days before the Natural Olympia. In pursuit of the perfect body, the vegan bodybuilder, like all bodybuilders, subjects himself to indignities not unlike those visited on industrial cattle.

Which only highlights the irony of Williams’ quest to cure what he calls our “eating psychosis.” As we talk about adopting a more sustainable diet, should we see a guy who eats four times his share of protein as a role model, or the equivalent of a biofuel-powered Hummer?

Finally, after a judge dismisses the contestants, Williams shakes out his hands and arms, claps enthusiastically a few times, and exits. As he turns, a large tattoo of the ida logo—the silhouettes of a dog, cat, and rabbit—comes into view on his upper left arm.

He knows immediately that he hasn’t won anything—he will, in fact, finish 12th out of 12. “I’ve done everything the universe told me to,” he says backstage. He heads into the ballroom to watch the top class of marquee competitors and support his friend—a tanklike Nigerian in a green velvet G-string named Moses Ajala.

Williams whispers to me that he hopes to qualify for this elite class in two years. He’s determined to keep eating “what the gods and goddesses put on Earth for us to eat,” bulk up to 215 pounds, and win the whole thing. “I want to come in big,” he says.