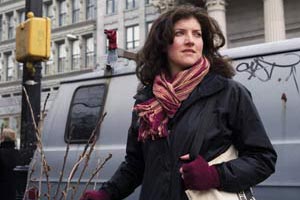 ON A CHILLY midwinter Saturday in New York City, Juli Borst shoulders her way into a bustling Whole Foods supermarket. But Borst isn’t here to buy stuff; she’s here to divest herself of consumer goods. Into a cardboard box near the front window she drops some batteries (not hers, she’s quick to inform me). At the customer service counter she hands over her expired Brita filter, then scrutinizes the 14 bottle caps at the bottom of her canvas tote. She’s collected them on the street—not to beautify her neighborhood, she says, but to raise awareness when people ask what the hell she’s doing.

“Whole Foods will take the No. 5s,” she tells me. Who knew that bottle caps were stamped with recycling numbers? “Look,” she says. I squint at the tiny white digit on the tiny white cap. “This is a 2,” she says. “I’ll have to bring that one uptown to Aveda. They take any rigid cap with threads.”

A classical singer, Borst, 38, lives with a roommate in Astoria, Queens. She became concerned about her use of plastic, and all that it signified, during her year of The Compact—a yearlong commitment to buy nothing new except for food, underwear, and health and safety items. (The Compact was established in 2006 by a group of San Francisco friends concerned with the environmental impact of consumerism.) Borst formally Compacted through 2007 and continues somewhat informally today, shopping at thrift stores, carrying reusable bags and containers (“the low-hanging fruit,” she says), and scouring local markets for meat and cheese unsullied by low-density polyethylene (a.k.a. wrappers).

“I was raised with a disgust of single-use packaging,” she explains. As the youngest of nine children growing up in Kansas, Borst diligently composted and recycled. Recreational shopping was unknown to her. Keeping her consumption in check is still about saving money, but now it’s also “about simplifying my life, it’s about the environment, and it’s about health—because the effect of these plastics is only beginning to be studied.”

Across the country, a vanguard of tormented souls is coming to the same conclusions. For some, the trigger was learning about plastic-befouled oceans. Others had epiphanies after learning about freegans, who encourage dumpster diving for food and household goods. Others took action after reading the No Impact Man blog or Alan Weisman’s The World Without Us or screening documentaries like The Story of Stuff.

Frustrated by government inaction and a culture of waste, the hardcore embark upon zero-waste challenges. Some, like Borst, try to send nothing to a landfill or an incinerator. Others take plastic-free vows, or weigh and photograph the plastic that does sneak into their lives. In Los Angeles, one father of two saved a year’s worth of his family’s waste (except for food, which he composted) in his basement.

Of all that Americans discard, plastic seems to hold a special place in the heart of the trash conscious, perhaps because it’s mysterious in origin, toxic to produce, hard to repair, and more often downcycled—into goods like carpets or fleece jackets that are eventually destined for the dump—than transformed into products that can be recycled again. (It is not, though, by any stretch the worst environmental offender in our trash—that distinction belongs to toxin-packed electronics.)

Across the street from Whole Foods is the Union Square Greenmarket, which even in the trough of winter offers a surprising array of locally grown, raised, and churned food. But if you’re trying to bring less disposable plastic into your life, quite a bit of this bounty—the bits made from animals—also becomes forbidden fruit.

“I really miss meat,” Borst says with a distracted air as she gazes longingly at the shrink-wrapped sausages and vacuum-packed bacon of Flying Pigs Farm. “And I haven’t had yogurt in six months.”

“What about asking a butcher to wrap your meat in paper?”

“I can do that, but they don’t have unwrapped bacon.”

I nod. “And you could make yogurt…”

Borst shrugs, resigned to the prospect of curdling her own milk.

Living with less plastic isn’t a sacrifice, Borst insists. “Mostly it’s about developing new habits.” Of course, those habits are easier to develop in places with a climate conducive to gardening year-round and a decent curbside recycling program. And, notes Borst, “it’s easier to do this in New York than elsewhere because there are more cranky, demanding customers in New York.” In other words, the mindful individual doesn’t feel like any bigger of a jerk than any other picky New Yorker when requesting a cocktail without a straw.

Then there’s the monger factor: Big cities tend to have more butchers and fish, cheese, and vegetable sellers who can put their wares in the consumer’s reusable containers. Also a plus: being youngish, single, child free, resistant to consumer temptations (cutting magazine and cable TV subscriptions makes this easier, Borst notes), and not required to work ridiculous hours. That’s important, because the less waste you generate, the more time you’re going to spend on handicrafts, baking, gardening, preserving food, perusing thrift stores, delivering discards hither and yon, and, late at night, perhaps while your bread dough rises, blogging about every bit of it.

“I blog about my efforts because it keeps me accountable to myself,” Borst says. [Borst’s blog is Plasticlessnyc.] Garbloggers cheer each other on through their daily posts, and they offer advice on everything from sewing reusable produce bags to making deodorant from baking soda. The lengths to which some go—olive oil as personal lubricant, anyone?—may suggest borderline OCD, but it’s important for Borst and others to appear normal. “I don’t want to wander off the rez, because I want to attract others to this,” she says. By confessing to their mistakes, they offer the sort of transparency that the rest of us could use a bit more of: If our curbside bags were clear, might we think twice about what we toss?

Still, the pursuit of perfection can take its toll. When Beth Terry, of the blog Fake Plastic Fish, opened a case of fudge sauce her dad had ordered for her, she had a “mini meltdown” at the sight of all those Styrofoam peanuts. But after pulling herself together, Terry strapped the contraband to her bike and delivered it to the shipping company’s warehouse for reuse. “The warehouse guy, while surprised, was genuinely appreciative,” she says.

At the Greenmarket, Borst heads toward an array of nine compost-collection barrels, each brimming with rotting vegetables, eggshells, tea bags, and now, her “Mark Bittman failure,” espresso-black-bean chili, which emerges from Borst’s much-reused plastic bag in a frozen lump. She’s been carrying it for more than an hour.

Is this obsession with waste doing any good? Borst—who frets over the plastic liners in her foil yeast packets and knitted a washcloth from scraps of blue and white yarn—knows it’s going to take far more significant action, by players far more powerful than she, to save the Earth from hyperconsumption and its attendant waste. “It will take massive societal change—from individuals demanding better-designed goods to government requiring that manufacturers change their ways.” That’s why Borst joined the Take Back the Filter campaign, which pressured Clorox into recycling its Brita filters, and why Jeanne Haegele, who blogs about consuming less plastic in Chicago, wrote three letters of complaint to Sunsweet about its individually wrapped prunes.

“I think what these people are doing is important and interesting,” says Eric Lombardi, executive director of the recycling and consulting firm Eco-Cycle and a leader in the zero-waste movement. Lombardi helps local governments wrest control of their waste from companies beholden to its steady flow, pressures manufacturers to take responsibility for their products, and invests in local waste-reduction infrastructure. “The downstream side of garbage gets a lot of attention, with recycling and composting,” Lombardi says. “But these folks are looking at the upstream side. They’re not only showing that how we spend our money is important; they’re also shining a light on products that we have to send back or redesign off the planet—the noncompostable, the nonrecyclable, and the toxic.”

But is it doing any good?

“No, but it’s making a dent in our thinking,” Lombardi says firmly. “And it has to start there.”

The reverse distribution of her food, electronic, and plastic waste consumes half of Borst’s day, but she hasn’t once shown a flicker of annoyance or frustration. Borst is a paragon of normalcy, the opposite of a shrill garbage freakazoid. But the sight of a coffee stirrer, at Whole Foods, suddenly stops her in her tracks. “Have you seen the latest evil genius of Starbucks?” she asks. “They’re now making a green plastic stick that fits into the hole of your coffee lid so you don’t spill it when you’re walking down the street.”

Her look of disgust says it all: How ludicrous is that? We shake our heads in sympathy, then Borst heads off, her slimy compost bag stuffed into her tote, ready to receive next week’s scraps.