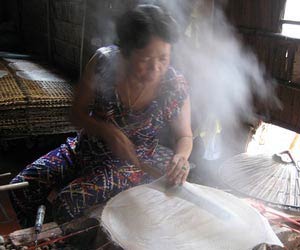 How can we fix climate change and empower women worldwide, all in one fell swoop? It may seem an impossible task, but that’s exactly what Liane Schalatek, a researcher at the Berlin-based Heinrich Boell Foundation, hopes that the World Bank and other organizations will commit to do come this December’s Copenhagen climate talks. I spoke to Schalatek about how natural disasters affect men and women differently, and why people assume that women will be better at adapting to climate change than fixing it.

Mother Jones: Micro-loans have been a boon to women all over the world, but in your recent report you say that big climate change funders often shy away from these small-scale projects. Why is that?

Liane Schalatek: Micro-finance is focused on a community-based setting, rather than a large industrial setting. So most organizations don’t even consider that you could make small projects big just by replication. For example, if 1 million solar panels work, then while every single home panel will have by itself very little impact, 10, 20, or 30 million of them will have a very large impact. The funds are set up to benefit the large-scale, expensive projects. Also, a lot of the climate finance instruments require precertification, development of baselines, which is prohibitively costly to be done for a small project.

MJ: How do you think climate financiers consider gender differently in terms of climate change adaptation versus mitigation?

LS: The consideration of gender is more intuitive when you talk about adaptation. The percentage of women among poor is considered usually to be higher, so groups that look at adaptation policy look at women primarily as victims, not as active contributors. It’s a quantum leap for a lot of the people when talking about mitigation. The general reaction is, What does that have to do with gender? But there is a larger role that women could play for mitigation technologies—not necessarily carbon storage and larger technologies, but, for example, solar panels that provide electricity for rural villages, relatively low-scale technology. Women could be trained to install and maintain them.

MJ: So do you think the most urgent issue here is women’s empowerment or effective climate finance?

LS: I’m not sure you can 100 percent separate it. But climate finance that takes gender differences into account is smart climate finance. I’m not saying that from a moral point of view, that should be the way to approach it, but I do believe that thinking about the different contributions that women and men can make to mitigation will lead to more effectively spent funds. If you only talk about parts per million and two degrees centigrade, it leaves aside the human development, societal component.

MJ: You’ve said that there is a need for “sex-disaggregated data.” What does that mean and how will this play a role in international climate finance models that the UN and World Bank are developing?

LS: For example, how are natural disasters are affecting men and women differently? You don’t have data that show, for example, if somewhere 70 percent of women are working in small-scale agriculture, they are therefore going to be much more severely impacted when rainfall is evading them for years. Some of the large development organizations, for example the World Bank, have all kinds of data—but they don’t do that kind of gender differentiation.

LS: Honestly, I don’t think we’ll make that much progress on the financing front. A lot of the northern governments are going into the negotiations pretty much hamstrung because of the financial crisis. Unfortunately it will probably lead to an overreliance on private funds. Other environmental conventions have a gender plan of action. UNFCCC [United Nations Framework Convention on Climate Change] doesn’t have it. But [at Copenhagen] there will be a formalized, accepted gender caucus.

MJ: So you’re not optimistic about the immediate success of climate finance?

LS: I’m German, so I’m not a natural-born optimist! But it’s not rocket science. Compared to some of the very complicated technologies, bringing gender considerations to bear—it’s feasible. There’s a lot of experience from the development side. There’s gender financing, there are experiments and piloted projects for technologies. Let’s just use them.