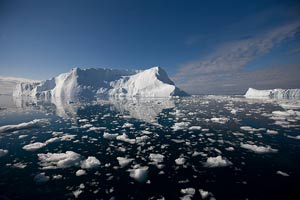 I didn’t make the trip to Thailand for the pre-Copenhagen negotiating session last week, and I’m glad I didn’t. For one thing, the weather was doing its best to remind delegates what global warming feels like: Bangkok can do hot and muggy like no place on Earth. For another, nothing much was happening—the big countries continued to refrain from making any promises about how much they’d cut emissions or how much they’d fork over to help the developing world leapfrog past fossil fuel. As Kevin Grandia, editor of the invaluable DeSmogBlog put it, “At the pace I have seen here in Bangkok there is little hope that these issues will be resolved by the time the negotiations end here on Friday. If these issues couldn’t be resolved in two weeks here, it would take a miracle for them to be in the can for Copenhagen.”

Meanwhile, in Washington, senators John Kerry and Barbara Boxer issued the Senate version of climate change legislation, which most environmentalists took as a modest improvement on the modest bill the House has already passed. It works the same cap-and-trade way, at the same all-too-deliberate speed. And it had barely been introduced before the president’s climate czarina, Carol Browner, said there was no chance it would make its way through Congress in time for Copenhagen anyway. Which everyone kind of already knew—but still, if there had been any buzz to begin with it would have been a buzzkill. About the only good news: Norway announced it will aim for even deeper cuts, reducing its carbon emissions 40 percent from 1990 levels by 2020 if other developed countries will go along. Given Norway’s position in the world carbon league, this is akin to the guy who stopped drinking in 1967 announcing he’s getting on the wagon—it somehow served only to underscore the depressing reality of climate gridlock.

In short: The scientific method has successfully identified the biggest problem the world has ever faced. It’s worked great. The political method has not worked so well. In fact it’s lurching toward something between abject and embarrassing failure.

And yet the game isn’t quite over yet, because one team has barely begun to take the field. And that’s the team you’re on—the, uh, people. For 20 years we’ve left climate policy up to the kind of people now failing to solve things in Bangkok. We’ve had experts of every kind, but we haven’t had—outside of, say, Norway—enough of a movement to be heard.

Which is why, all the bad news aside, I’m in a good mood. We’re just under two weeks away from our global day of action at 350.org, and the movement has gone viral, turned into a monster. It’s the first campaign ever built around a scientific data point (scientists now tell us that 350 parts per million is the most carbon we can safely have in the atmosphere, a number we’re already past). Every day new people appear who are organizing big actions; yesterday we found out that organizers in Iran have managed to organize four actions for the October 24 day. They’ve even set up a website in Farsi. Ditto for events in Yemen, ditto Palestine, ditto Burundi. Thousands of actions, each more creative than the last. Artists too: Here’s Barry Lopez writing an exactly 350-word short story, the first in a series of writers that will be popping up in the next two weeks. I’m going to be in organizing mode these next 14 days, with not much time for reflecting: If you hear from me it will be in a hectoring tone. Like this: If people in Iran can get it together to organize an action, so can you.

This article is part of our Assignment 2020 project, a long-term reporting effort on the most important story of our time.