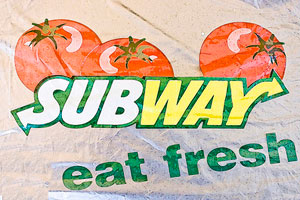 Restaurant upstart Subway, riding high on the marketing message of healthy fast food, will overtake its titanic competitor McDonald’s in American store locations by the end of 2009, with a shocking total of more than 32,300 outlets.

That’s something few consumers could imagine before the sandwich chain piggybacked on huge weight loss of morbidly obese Jared Fogle—who lost 245 pounds by exercising and eating only its sandwiches, in contrast to Super Size Me‘s Morgan Spurlock, who got fat and sick eating McDonald’s grub.

In the process, Subway has managed to carve out a lucrative niche in a perfect storm of fast food and economic recession. Now, Subway has emerged as a healthy alternative in the market place, partially because its modest business model allows it to crawl into the nooks and crannies of our far-flung country that cannot sustain stand-alone restaurants like McDonald’s, which depend heavily on drive-through business for its earnings.

“It’s amazing,” AlterNet‘s executive editor Don Hazen said after a recent trip. “I found Subways at obscure corners of national parks in southern Utah and attached to convenience stores on Indian reservations in Navajo country, where there were no other fast-food spots within 50-100 miles.”

To be fair, Subway has miles to go before it makes nearly as much money as the late Ray Kroc’s powerhouse, which pulls in around $2 million per store,  compared to Subway’s $445,00 per shop.

But when it comes to the fast-food game, there’s something to be said for ubiquity, especially during a recession. But is the meteoric rise of Subway really a byproduct of a marketplace more in tune with health than before? Is Subway a fast-food success because it offers a healthy alternative to the calorie-packed, fat-riddled burgers of McDonald’s and more?

“That’s part of it,” explained Subway spokesman Wes Winograd, whose company’s motto has been “Eat Fresh” since 2001. “That’s the ‘fresh’ side of it. The idea of Subway as a healthy alternative came from the fact that we don’t fry anything. There’s lots of veggies on the sandwiches. The meats are low fat. Things like that.”

But the other part of the equation, Winograd said, is public participation, from the sandwich-making to the franchise-building, and all the way to the marketing. “All of our locations are franchise owned,” he said. “The sandwiches are made in front of you. The customer participates in what’s put on the sandwich, as opposed to other restaurants, where food comes out of the back room.”

Those often unsanitary back rooms, and compromised boardrooms, took a serious hit within the last five years after the films Super Size Me, Franny Armstrong’s McLibel and Richard Linklater’s nasty Fast Food Nation, based on the damning book of the same name by investigative journalist Eric Schlosser, were released.

That anti-McDonald’s zeitgeist took serious hold as Subway’s persistent marketing of Fogle, which caught fire starting in 2000, was peaking.

The result was a perfect storm of bad publicity for conventional fast-food shops and an open door for upstarts like Subway, whose plate-glass serving stations were loaded with more vegetables than meats and were symbolized by an average Jared ready to transform himself, and the company, into an advertising dynamo.

“When Jared came on the scene, things just got out of hand,” Winograd recalled. “It really put us on the map. He had lost 245 pounds on a diet that he designed, which included eating nothing but Subway for about a year and combined with exercise. He went from morbidly obese to healthy, so we put him in some commercials, and it resonated with consumers. People to this day write and tell us that they were inspired by him. People related because he was a regular guy. We didn’t ask him to lose weight.”

Of course, Subway didn’t ask him to tell customers that it might be impossible to lose weight eating nothing but Subway’s subs either. A quick look at the calorie count of some of Subway’s many sandwiches can convince anyone good at rudimentary math that simply foregoing McDonald’s for Subway is about as healthy as the once-fabled Atkins diet.

“Honestly, it depends on what you order in both places,” said Jill Richardson, author of Recipe for America: Why Our Food System is Broken and What We Can Do To Fix It and blogger for La Vida Locavore.

The concept that eating at Subway means one is eating fresh is also suspicious. The chain’s official site, while offering a wealth of nutritional information on its sandwiches, does not explain where it gets its meats, cheeses and vegetables or the food mileage involved.

And even if it did, the concept that food is fresh because it simply hasn’t been cooked stretches credulity.

“Iceberg lettuce and tomatoes picked before they are ripe are not exactly the most nutrient-rich choices in the vegetable world,” Richardson said. “But they meet Subway’s needs, because they travel and store well.”

That said, there are probably few left on earth who believe marketing communicates anything other than slanted truths in search of maximum revenue. Subway’s “Eat Fresh” slogan might not make sense to those familiar with the slow-food movement or advocates of community gardening, for which the phrase “Eat Fresh” means something else entirely.

But when it comes to the conventionally fried, freeze-dried world of fast food, it’s a safe designation for a business looking to capitalize on its difference. Capitalization, of course, is the name of the game. Subway has ridden Fogle and the new millennium’s resurgent appetite for healthy eating for all it is worth.

In 2010, it will have survived nearly three years of disastrous recession with money in its pockets and surprising growth to compete with one of the most iconic American restaurants in existence. “The recession is treating us well,” Winograd said.

“Everyone has to eat. Families cut back on more expensive, indulgent places, and they’re looking for comfort food. Our $5 foot-long promotion is now part of our pricing strategy; it’s going to be sticking around for a long time.

“We’ve got franchisees that used to be customers who now want to start a store. Since the recession, we’ve gotten a lot more inquiries, which is traditional: There’s a mistrust for working for a corporation, and it’s the American dream to run your own business.”

To do that, it’s often more than enticing to align your future with a successful brand like Subway, although franchises can cost tens of thousands of dollars to start.

A better option for creating your own locally sustainable, health-conscious business might be to follow the example of Milwaukee’s Growing Power. It’s an urban farm that, Richardson explained, “mostly runs off of food waste and produces high-quality nutritious produce, as well as eggs, meat, fish  and honey. They’ve been so successful that many other cities are mimicking their model, and the Clinton Global Initiative has even tapped its founder Will Allen to adapt his farming model to fight starvation and malnutrition in Africa.”

Sure, it’s not as sexy as starting up your own Subway. But it more appropriately and concretely defines the concept of eating fresh than a chain restaurant. Eat that, Jared.