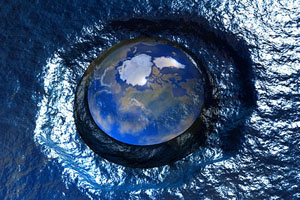 Photo by flickr user <a href="http://www.flickr.com/photos/softpixtechie/">Cherrylynx</a> used under a Creative Commons license

Two caveats. First, early in the primary season, when I was asked to join Environmentalists for Obama, I signed on immediately. I knocked on doors, made phone calls, gave money, and celebrated his victory—I think he’s the best president of my lifetime.

Second, Obama has done much that’s right about climate, including surround himself with a stellar staff of advisers. From auto mileage to green stimulus spending, he’s done more to deal with global warming than all of the presidents combined in the 20 years that it’s been an issue.

But that’s a pretty low bar. And the announcement yesterday from the APEC meeting in Singapore that next month’s Copenhagen climate talks will be nothing more than a glorified talking session makes it clear that he has, at least for now, punted on the hard questions around climate. The world won’t be able to get started on solving our climate problem, and the obstacle is—as it has been for the last two decades—the United States.

And in fact none of this should come as a surprise to anyone paying attention. For a year now it’s been clear that the president is not particularly focused on applying the political pressure that would have been necessary to reach any kind of pact, much less one that approaches what the science demands. Despite the deadline of the Copenhagen conference, Obama placed energy second on his priority list, guaranteeing that health care would occupy most of the year. He talked very little about climate, tending instead to talk about green jobs and energy security, and in the process left the door open for climate deniers to have a field day. And then—as with health care—he left it pretty much entirely up to Congress to write the necessary legislation. That kept him from having to bear the blame for a byzantine bill, but it also meant that the Senate—the body from which he came, and whose culture he had to know—could work in its usual style, without White House pressure. Which at the moment means that Joe Lieberman and Lindsey Graham are essentially rewriting the legislation, to what end no one really knows.

The real tip-off of Obama’s unwillingness to lead, however, has been the endless spinning of his climate negotiators. For 12 months they have been fibbing about the science—reiterating over and over again that their goal is the “scientific standard” of 450 parts per million of CO2 in the atmosphere. That’s no longer scientifically accurate—in the last two years, since the rapid Arctic melt in the summer of 2007, scientists have made it clear that a treaty that aimed at 450 ppm would be a treaty that left the planet free of ice, a planet where many current nations would disappear beneath the waves. We’re at 390 now—we’re already too high. The 450 number came from the various graphs and tables of the 2007 report of the Intergovernmental Panel on Climate Change—but Rajendra Pachauri, who chairs the IPCC, has said repeatedly in the last year that that science is out of date. Recently, asked why he’d endorsed a 350 target instead, he said, “As a human being, I just couldn’t keep quiet in the face of all this overwhelming evidence. I know it’s probably not right for me to take a position such as this, but on the other hand, I think it would be totally immoral on my part not to take a position, so I came out and said so.”

By contrast, the Obama administration’s position has been that a tough treaty is politically unrealistic—that the Senate would never pass it. That’s certainly true, at least for the moment. But the White House is starting to use the Senate in the same way that the Bush administration used China—as a scapegoat for doing too little. You don’t get to blame the Senate if you haven’t pushed the Senate as hard as you possibly can. It would take a huge commitment of presidential leadership, the sacrifice of large amounts of political capital, to change political reality. It would also take a movement of citizens—which we’ve tried hard to build. Three weeks ago we at 350.org organized what CNN called “the most widespread day of political action in the planet’s history.” Many prime ministers, environmental ministers, and foreign ministers participated—heck, the president of the Maldives convened an underwater Cabinet meeting to make the point about how desperate the situation was. We asked the White House if anyone—some spare undersecretary of something—might come to one of the 2,000 demonstrations across the United States. They couldn’t find a soul.

They’ll have another chance. With groups around the world, 350.org will help organize candlelight vigils across the planet on the weekend of December 12. Many will take place at American embassies and consulates. Not because anyone is anti-American. Because everyone remains hopeful that America will finally help lead to solve the problem that it, far more than any other nation, caused.

None of this is easy. (I haven’t even mentioned the obscenely low amounts of money the administration and Congress are talking about appropriating for the foreign aid that will be required to help developing countries adapt to the global warming America has caused.) But all of it is easier than trying to deal with the world that’s coming at us faster every day we don’t act. Pressuring Senate Republicans (or coal-fired Democrats) is hard; pressuring physics and chemistry is harder still. In fact, it’s impossible. That’s why this is different than health care reform or financial re-regulation. You have to actually meet the scientific standard, not just do better than George Bush.

And of course, politically, Obama doesn’t need to do it. He doesn’t need to worry about environmentalists abandoning him for someone else—he’ll always be the preferable choice, and I’ll always be out there knocking on doors for him. But his legacy won’t depend on the shiny medal the Norwegians hang around his neck next month; it will depend, more than anything else, on whether or not he really tackles the biggest problem the planet faces. There is still time for him to make the crucial difference, but not if his administration continues in fib-and-spin mode. At the same meeting in Singapore where he made it clear that Copenhagen would not negotiate a new climate treaty, he invited all the other APEC leaders to meet in 2011 in Hawaii, adding, “I look forward to seeing you all decked out in flowered shirts and grass skirts.” Whatever—that sounds more like his giggly, sophomoric predecessor than the leader we desperately need.