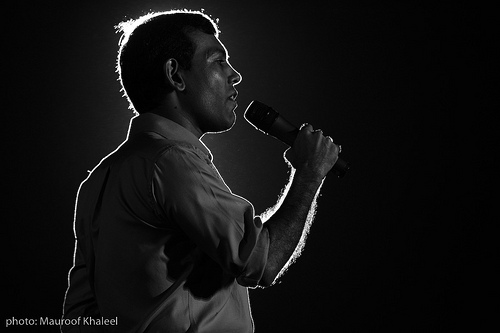 Nearly two decades after writing a book that popularized the term “global warming,” MoJo contributing writer Bill McKibben founded 350.org. He is chronicling his journey into organizing with a series of columns about the global climate summit in Copenhagen. You can find the others here. Check out MoJo’s live stream of collaborative Copenhagen coverage here.

There’s nothing like a genuine star, the way they light up a room.

Yesterday the first head of the state to reach Copenhagen climbed off the plane, and delivered one of those moments you’re glad you saw firsthand. Even if it took a bit of waiting.

We held our big public 350 rally in the afternoon at the KlimaForum, the venue in downtown Copenhagen where ordinary people who don’t have badges that give them access to the Bella Center congregate. (And there will be more and more of them every day, since the UN has apparently decided there’s a little too much democracy for their closed-door tastes. Beginning today, they are letting only a fraction of the NGO representatives into the bunker on the edge of town where negotiations are underway. Security, don’t you know.) Anyway, the star was to be Mohamed Nasheed, president of the Maldives, and the head of state who has been the movement’s great champion. He was due at 5:15 so a little after 4:30 I took the stage to talk, describing the science of 350, and then the movement we built. I’d begun to show pictures from our Oct. 24 rallies, 5200 of them in 181 countries, which CNN dubbed “the most widespread day of political action in the planet’s history,” when one of my colleagues, Kelly Blynn, held up a little sign: “He’s 30 minutes late.”

Which, frankly, was to be expected. Indeed, I was almost glad to hear it, because I knew Nasheed was fighting hard to get 350 language back into the text. (It mysteriously disappeared overnight, with no debate, no vote, no anything.) So then I started showing pictures from last weekend, when with groups like Avaaz and Greenpeace we organized thousands of candlelight vigils around the world. (Check out the TckTckTck website to see the results.) I showed…a lot of pictures of people with candles. And then Kelly came up to whisper in my ear “25 more minutes.”

I filled it. The overflow crowd knows a lot more than they want to know about climate science, the politics of climate negotiations, and the perfidy of the Obama administration, which is the single force causing the most trouble at these talks. (Well, Saudi Arabia. And Canada is doing a pretty great job too. But in the end, it’s the Americans, hiding behind the skirts of the Senate.) And finally the word came—he’s in the building. Almost before I could finish the introduction, telling the story of his years in political prison and exile, his career as a nonviolent activist, his—well, here he was, surrounded by a rapidly moving scrum of TV cameras and boom microphones. People were instantly on their feet, and he was rapidly on the stage, and launching into a remarkably strong (and compared to me blessedly short) speech.

He told the story of sitting in jail, “feeling more alone than you could imagine. There were times when I started to believe the doubters, who said the Maldives would never become free…But we refused to be swayed by those who could not see that change was on the way.”

The crowd erupted, of course. The chant rolled round the room even as he left the stage, descending into the gang of reporters. Was it worth the wait? It was worth the wait 350 times over.