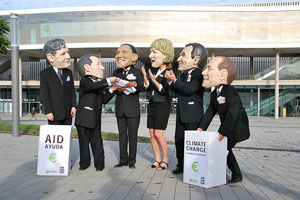 “It’s not about the money.”

That’s what an Obama administration official at the Copenhagen climate summit told me on Tuesday, as ministers and delegation heads were holding informal negotiating sessions on what have been dubbed the “crunch” issues. And his comment seemed odd. One of those crunch issues is what’s officially termed “long-term financing for adaptation and mitigation.” In plain English, that means money—perhaps $100 billion or more annually—to help poorer nations limit emissions and contend with climate change. This proposed pot of gold would come mostly from the industrialized nations that became wealthy by befouling the atmosphere, and developing nations say it’s essential to reaching a deal. European officials, using calmer rhetoric, also agree that such a fund is necessary. And then there’s United States. The Obama administration has not even hinted that it intends to back this kind of spending, but has instead focused on a much more modest sum—$10 billion annually for the next three years, of which Washington would pick up $4.2 billion.

How could money not be one of the critical sticking points? “This is not going to rise and fall on the money,” this US official insisted. He proceeded to list the crunch stuff that the US delegation considers to be potential deal-killers: “We have to get the developing nations into an international agreement,” the official said. “And we can accept the numbers presented by China and India”—regarding emissions limits—”but not if it’s a matter of them saying, ‘hey we’re verifying ourselves and, look, we’re meeting our own targets.'” Yet China has forcefully resisted the idea of incorporating their self-professed emissions goals (essentially, slowing the growth rate of emissions) into a binding agreement. China has also repeatedly said that it will not submit its performance to official outside vetting.

So is Washington on Mars, and China on Venus? Maybe. With just three days left, there is still no sign of a deal. As negotiations have ground on UN officials and European negotiators echoed one another in public statements: real progress is being made, but there’s further to go. But US climate envoy Todd Stern wasn’t sharing in the happy-talk. At a press briefing, he noted that he had spent “long hours” in discussions, including with Xie Zhen Hua, China’s top climate official, and “the parties are quite far apart on a number of issues.”

Stern also showed no give. He began the briefing with a bold contention, namely that the Obama administration’s proposed emissions reductions for the coming years are in line with those of other industrial nations. As proof, he presented a variety of stats—without noting that Europe began its emissions reductions years ago and has already made significant headway. Reminding listeners that Obama’s proposed reductions are tied to legislation languishing in Congress, he said, “I am not anticipating any change in the mitigation commitment.”

No deeper cuts, and nothing (yet) on the big money. So what can the United States offer to grease negotiations? To make matters even harder, Stern insisted that any pact would have to cover China’s obligations: “They’ve got to be prepared to put what they’re doing into an international agreement.” And he meant one with vigorous monitoring procedures.

With the United States and China apparently stuck in a standoff, other countries have been attempting to nudge them along. “Time is running away,” complained Andreas Carlgren, the Swedish environmental minister. The United States and China together account for half the world’s emissions, he noted: “We still expect them both to raise their ambition levels.” And he reiterated the European Union’s offer to bump its reductions from 20 percent to 30 percent, if the other major players also up their bids. But Europe won’t do this on its own: “We see it as a lever.” he said. “Otherwise we would sell out our target too cheap.” What can China and the United States do to persuade the Europeans to punch that 30-percent button? I asked Carlgren. “That’s exactly what we’re negotiating,” he replied.

As negotiators negotiated—morning, afternoon, and night—the Bella Center was bustling. Christmas carolers strolled about singing climate-themed versions of old favorites. Indigenous South Americans paraded with placards proclaiming that industrialized nations must pay “climate debt” to developing nations. Activists in tree outfits lumbered through the halls. Nongovernmental organization officials huddled in circles, reviewing the fine print leaking out from official meetings. California’s Republican Governor, Arnold Schwarzenegger, delivered a spirited call for a citizen’s crusade—akin to the labor, suffragette, civil rights and anti-Vietnam War movements—for “sub-national” action to rein in pollution. And addressing several hundred avid admirers, Al Gore urged negotiators to at least produce an agreement that will lead to a binding treaty next year to reduce carbon dioxide in the atmosphere from the current 388 parts per million to 350 ppm. To that end, he proposed moving up the next climate summit from November to July, and called on Obama to set April 22, the fortieth anniversary of the first Earth Day, as the deadline for congressional passage of US climate legislation. And thousands of other non-officials did thousands of other non-official things.

But this lively scene has apparently had little effect on the tense conversations being conducted behind closed doors. “It’s fair to say they have been going in a pretty bumpy fashion,” said a senior US official during a conference call with reporters, adding that such discussions “are often difficult before they come together.” That’s becoming a familiar cliché at the convention center: climate negotiations are a mess, until they’re not. But with 115 heads of states beginning to arrive, the Copenhagen talks have left some fundamental gaps for the last minute. Even if those gaps are bridged, the resulting agreement could fall far short of what experts say is necessary to redress the dire consequences of rising global temperatures. Just ask the scientists roaming the halls.

“We know a deal is visible,” Danish Prime Minister Lars Rasmussen said on Tuesday night. “But it’s also very complex…Every issue is linked…It’s a puzzle that can only be completed if you set all the pieces in one movement at the same time.” And that presumes you have all the pieces in hand.