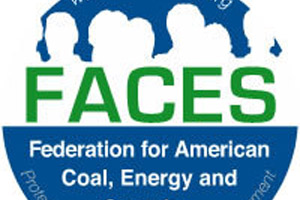 The Federation for American Coal, Energy and Security, a.k.a. FACES of Coal, describes itself as an “alliance of people from all walks of life” that promotes “the importance of coal and coal mining.” Its website, launched in August, features photos of smiling folks who presumably represent some of its 20,000 supposed supporters. But as revealed by Appalachian Voices, many of the supposed “faces of coal” were stock photos. (They’ve since been removed from the site.)

Until recently the FACES website was registered to Adfero, a PR shop whose own website boasts of its skill at building grassroots movements, its “access to key contacts on the ground who can conduct intercepts with elected officials at speeches, rallies, local town hall meetings and other events,” and its “grassroots network” that can appear on local news and submit op-eds or letters to the editor. “We can mobilize an army of supporters to send letters or emails and make phone calls to policymakers in support of your issue.”

Adfero managing director Jeff Mascott says his company’s involvement in the FACES campaign was limited to website design. He declines to say who hired his firm to help launch the FACES project. He also objects to the idea that its “grassroots” services are astroturfing. “We’re a business that helps trade associations and interest groups and other kinds of organizations communicate a message to supporters and lawmakers and other parties,” he says. “I don’t know why that is any different than the SEIU [Service Employees International Union].”

Though Mascott denied doing any work on climate issues, Adfero’s clients have included Koch Industries and the US Chamber of Commerce (many members of FACES of Coal are local chambers hailing from coal country). And Fireside 21, a software company spun off from Adfero, has deep ties to the GOP. Ken Ward, Fireside 21’s CEO, is a former staffer for conservative California representative Richard Pombo, and Mascott, Fireside 21’s president, previously consulted for the House Republican Conference, where he built the original GOP.gov. “That was a former life,” Mascott says. “We have people in our shop who used to work on Capitol Hill for both parties.”