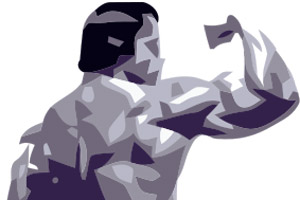 8th century BC Greek Olympians load up on mushrooms, herbs, and wine to boost speed.

1888 British dictionary defines “doping” as “a mixture of opium and alcohol given to race horses.”

1940s Nazis give their troops amphetamines. So do the Japanese, British, and Americans.

1969 Track & Field News hails steroids as the “breakfast of champions.”

1983 A presenter at a urology convention drops trou to demo his new impotence treatment, a Viagra precursor.

1996 Arnold Schwarzenegger says he has “no regrets” about steroid use: “It was what I had to do to compete.”

1997 Former East German shot-put champ has a female-to-male sex change after years of artificial testosterone use.

2003 Olympics removes caffeine from its list of banned substances.

2008 US Olympic Committee launches “Don’t Be an Asterisk” anti-steroids campaign.