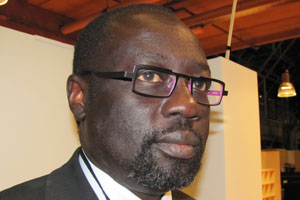 Will backroom deals among rich nations lead to death and devastation for poorer ones? That’s the fear of negotiators from world’s most impoverished countries—a bloc known as the Group of 77, or G77—especially after an early draft of proposed negotiating text was leaked to the media on Tuesday. It outlined a weak agreement that required fewer emissions cuts from wealthy nations. In the conference’s first flashpoint, G77 negotiators stormed into a main hall in the middle of the busy conference center. “We will not die quietly,” they chanted.

“We have been asked to sign a suicide pact,” declared Lumumba Stanislaus Di-Aping, the Sudanese chairman of the G77. The proposed levels of warming that the draft would allow mean “certain death for Africa,” he said. The group also slammed the proposed levels of funding from rich nations to help developing countries adapt to climate change and curb their own emissions. “Ten billion dollars is not enough to buy us coffins,” charged Di-Aping, according to reports from the scene.

The leaked draft is not necessarily the negotiating position for many developed nations. But it has raised suspicions that rich nations aren’t being honest brokers. Mother Jones talked to Di-Aping on Tuesday night about the draft and what it means for those countries for which the talks at Copenhagen are already a matter of survival.

Mother Jones: What impact has the leaked draft had on the summit?

Lumumba Stanislaus Di-Aping: The leak is a very unfortunate development and a very dangerous development because it has confirmed that some people in the Danish government are hell-bent on superimposing an unjust deal on developing countries. Of course, it equally says there’s no respect at all to the formal process and the spirit of transparency, equal participation, equal vote, and voice—which is why we have a UNFCCC. It’s a select few being chosen, and it’s the interest of few being advanced at the expense of all humanity. This is the procedural problem with this document and this process.

MJ: What does that mean for the negotiationsgoing forward from this point?

Di-Aping: Luckily enough, most member states are determined to do their best to reach a successful outcome. G77 member states will continue negotiation. They are committed to transparent negotiations in order to reach a just and equitable deal, and a just and equitable deal is a deal that will grant them both the right to rapid economic development and at the same time radical reductions of emissions. This is what is needed.

MJ: I know one of the issues raised is the two degree idea—that it was okay to have the planet warm by two degrees—and I know that the G77, especially the African delegation, has said this goal won’t prevent major climate changes.

Di-Aping: This is a very serious issue. Two degrees centigrade [of warming] translates into 3.75 degrees in Africa, which means basically Africa is being turned into a furnace. That’s basically certain death for Africa, and as such it’s not something that any African—man, child, or woman—will accept. I cannot imagine which president of which African state will choose to condemn his citizens to total devastation and destruction in order to keep the supremacy of Western economies.

MJ: What is a better target?

Di-Aping: Africa as we speak has put forward, not formally yet, 1.5 degree centigrade for a goal.

MJ: You speak on behalf of the G77, the largest bloc represented at the summit. What are the challenges to bringing everyone in the G77 to consensus?

Di-Aping: As Walt Whitman would say, we are a multitude of things. We may not cohere on the face of it, but it’s been our tradition since 1964 that while understanding the differences, we have to negotiate from a common position. We are advancing and we have made huge progress in order to articulate the common position, which is where we are going to start from. I can comfortably say in absolute, [that when we are a united bloc], developed countries cannot impose on developing countries. We have the resolve not to condemn our citizens to suffer.

MJ: The other major question on the agenda is how much money developed nations will give to help developing countries reduce their emissions and adapt to climate change. What do you think of the $10 billion figure for short-term financing that developed nations are discussing?

Di-Aping: Well, the question of the quantity of the finance required to deal with this situation needs to be seen from this perspective: What is the nature of the risk that we are facing, and is the finance and the actions taken commensurate with that risk? The world’s scientists and policy decision makers have publicly stated that this is the greatest risk humanity has ever faced. Now if that’s the case, it’s very strange that $10 billion is considered adequate financing even for a fast track. Compare $10 billion to $1.1 trillion that developed countries put on the table to handle and address the financial crisis. Think of the trillions that the U.S. Treasury poured into Wall Street to save the banking industry, which is legitimate. Compare that to the amount of money being used and put into the defense budget. There are trillions being spent on armies with imaginary battles to fight when the risk that we face is being dealt with in the most illogical manner.

Developed country leaders…need to rise to the level of leadership required. That’s why we appeal to all of them, from Australia to Canada and from the US to Japan, to rethink the policy decisions and the proposals put forward because they are condemning developing countries to an unimaginable sentence.