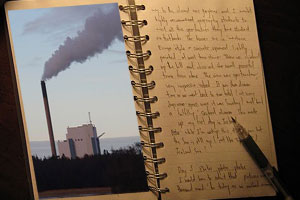 Also from the Climate Desk: Inside Rupert Murdoch’s unlikely effort to green NewsCorp (and Fox News).

I’ve been known to indulge in a few potato chips now and then—and by a few, I mean the whole bag. But it wasn’t until my doctor asked me to keep a diary of my dietary habits that I began to realize I might have a fried-potato problem. It’s one thing to mindlessly munch on Kettle Chips while watching the cast of Glee bust out a racy rendition of Salt-n-Pepa’s “Push It.” It’s another to document every single indulgence for the inspection of your disapproving doc. As it turns out, the diet diary is a tried-and-true weight-loss technique, as a 2008 study in the American Journal of Preventive Medicine discovered. It worked for me: After two weeks of guiltily recording every time I popped a Pringle, I started eating a lot more carefully.

This simple tool may be useful for tackling problems more momentous than my potato-chip habit. Take the heat-trapping greenhouse gases that are changing life on Earth as we know it. As it happens, a collection of agencies and regulators are about to require large swaths of the economy to record and disclose their emissions—basically the equivalent of a carbon diary. Could the country’s biggest polluters be shamed into going on a greenhouse gas diet?

Soon, major emitters that account for roughly 85 percent of the country’s greenhouse gas output will be required to report their emissions to the Environmental Protection Agency. Electric utilities, oil and chemical refineries, major manufacturers, and iron and steel producers will start submitting data by 2011, with heavy-duty vehicle and engine manufacturers to join in the following year. And any public company—from banks like Bank of America to department stores like Wal-Mart to software companies like Microsoft—will have to report its impact on the climate, as well as potential liabilities arising from global warming, under new guidelines from the Securities and Exchange Commission. A growing number of businesses are even ‘fessing up voluntarily, via initiatives like the Carbon Disclosure Project, whose 2,500 member companies document both their own emissions and potential financial risks arising from environmental changes.

The model for the new wave of carbon disclosure rules is the Toxics Release Inventory (TRI), which was created by Congress in the 1980s to discourage the use of harmful chemicals in industrial production. The program didn’t force companies to cut back on the chemicals they released (amendments to the Clean Air Act would later do so). It simply mandated that they document them. But then something unexpected happened. When the first year’s worth of data was released in 1987, it made the front pages of newspapers around the country. Chemical manufacturers, oil refiners, and paper mills, it turned out, had pumped out nearly three billion pounds of toxic air pollution that year—and the inventory identified the worst offenders. Richard Mahoney, CEO at the agribusiness giant Monsanto—which had released 374 million pounds of toxins into the air over the preceding 12 months—vowed to cut the company’s toxic emissions by 90 percent over five years. “Our overall goal is zero effect on public perceptions,” Mahoney told Financial World.

In the first year of reporting from 1987 to 1988, toxic releases dropped by 548.8 million pounds. Between 1988 and 1989, they fell by another 720.8 million pounds—a 19 percent decrease in just two years. Some companies “really didn’t know what they were emitting,” said David Doniger, climate policy director at the Natural Resources Defense Council. Others “didn’t want to lose the perception of being clean.” The principle at work was what psychologists call “social proof”–the human tendency to adjust behavior to those around them. Companies, like people, don’t want to stand out for the wrong reasons.

Early adopters of carbon disclosure credit the practice with helping them identify bad habits. 3M, maker of the ubiquitous Scotch tape as well as other adhesives, building materials, and medical and office supplies, started counting and disclosing its greenhouse gas emissions in 2002. In the process, it discovered that its thermal oxidizers—which are used to keep hazardous toxics out of the air—were responsible for a significant portion of their carbon emissions. By adopting a new system, the company was able to cut emissions 54 percent by 2006, says 3M’s manager of environmental initiatives and sustainability, Keith Miller.

Putting emissions data in the public domain can also bolster legal efforts to tackle climate change. In 2005, lawyers for a group of states suing electric utilities over their carbon output used EPA records to calculate the five biggest polluters—American Electric Power, Southern Company, Cinergy (now merged with Duke Energy), the Tennessee Valley Authority, and Xcel Energy. After losing in district court, the states won on appeal (the utilities are seeking Supreme Court review.) Expect to see more such lawsuits: The various new disclosure rules under development will gather data from many more companies and make it widely accessible.

Of course, just as a diet diary alone won’t magically evaporate unwanted pounds, carbon disclosure alone is not the answer to our over-emitting problem. But if my potato chip consumption is any guide, it’s a surprisingly effective place to start.