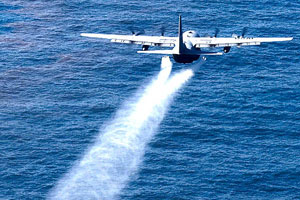 During a conference call with reporters on May 24, EPA Administrator Lisa Jackson, fielding questions about the use of toxic dispersants to break up the oil from the BP spill in the Gulf of Mexico, made a clear promise: “We will conduct our own tests to determine the least toxic, most effective dispersant available in the volumes necessary for a crisis of this magnitude.” Jackson said that she was “not satisfied that BP has done an extensive enough analysis of other dispersant options.”

But a month later those tests have not been completed, according to the EPA. In the meantime, the total amount of Corexit—the brand of dispersant chosen by BP and approved by the Coast Guard—that has been dumped into the Gulf has reached more than 1.4 million gallons.

The use of two Corexit dispersants, both manufactured by the chemical company Nalco, has generated controversy since the early days of the spill, with critics claiming the dissemination of this toxic substance in the Gulf could do more harm than good. Recently, Richard Denison, a senior scientist at the Environmental Defense Fund, noted that the toxicity of Corexit, when combined with oil, is greater than the toxicity of either on its own, raising additional questions about the extensive use of Corexit. Prior to the May conference call, the EPA had directed BP to find a less toxic alternative and start using it within three days. But BP refused, arguing that there weren’t any better products available in the volumes the company needed. This led Jackson on the call to pledge that the EPA would conduct its own tests on Corexit and the alternatives—tests which the agency has not yet concluded.

EPA Director Carol Browner compared Corexit to dishwasher detergent: “If you have a oily pan and wash it, you squirt some Dawn in, right?… So in your kitchen sink, you have the oil starting to break up and you’re seeing that biodegrading process right in front of you. That’s what happens.”

Though the EPA has flagged BP’s dispersant of choice as a concern, the Obama administration has publicly insisted that Corexit poses no problem. At a White House press briefing last week, Coast Guard Admiral Thad Allen, the commander of the Gulf effort, and Carol Browner, a White House aide on energy and climate change, dismissed qualms about Corexit. “We know there is some toxicity with dispersants, but it is far less than the toxicity of the oil,” Allen said. Browner compared Corexit to dishwasher detergent: “If you have a oily pan and wash it, you squirt some Dawn in, right?… So in your kitchen sink, you have the oil starting to break up and you’re seeing that biodegrading process right in front of you. That’s what happens.”

During that May 24 conference call, which took place a month into the eco-disaster, Jackson acknowledged the need to dramatically reduce the amount of Corexit being applied. “Given our concerns over the environmental unknowns,” she remarked, “we think it’s prudent at this time to ramp-down overall use of dispersants.” She noted that “we believe we can reduce the amount of dispersant applied by as much as half, and I think probably 75 percent, maybe more.”

At the time, Jackson said that EPA scientists would not only conduct tests to find a less toxic alternative to Corexit, they would also conduct “parallel independent tests to determine BP’s argument that Corexit remains the best alternative is accurate and supported by science.” That set of tests has not been finished, either.

Jackson noted that BP’s use of Corexit below the surface of the Gulf was unprecedented, as is its use of massive quantities of dispersants, and she remarked that the environmental impacts of these practices remain an open question:

With the tests pending, BP has continued to use a large volume of dispersants.

Two days after Jackson’s conference call, the EPA issued a directive ordering BP to “establish an overall goal of reducing dispersant application by 75% from the maximum daily amount used”—some 70,000 gallons per day. The directive also limited subsea application to no more than 15,000 gallons a day. While BP has largely stayed below that daily limit, on several days it has far exceeded that threshold. (According to an EPA official, the company has received Coast Guard waivers in these instances.) Based on the 70,000 gallon ceiling, BP has so far brought down dispersant use by 68 percent, the EPA reports. But the company’s average daily use so far is still 22,600 gallons, a decrease of only 9 percent from the pre-directive average, as Denison has pointed out, using calculations compiled from the Unified Command’s daily reports.

The agency does not have an estimated time for when the tests On Corexit and possible alternatives will be completed. “As soon as possible, certainly within the coming weeks,” the EPA official tells Mother Jones. The agency said in a statement that it is “making progress” on independent testing of eight dispersant products “to determine toxicity, to determine whether the dispersants function as endocrine disruptors and to model for bioaccumulation potential.” The statement added, “These tests take varying amounts of time, and the Agency also has to assure the quality of the data. As soon as that process is completed, EPA will share the results with the public.”

Scientists from environmental groups who’ve been monitoring the dispersant issue note that this sort of testing doesn’t happen overnight. “We’re all impatient to see the results of the dispersant testing, but I am also realistic and realize it takes time,” said Gina Solomon, a senior scientist at the Natural Resources Defense Council. But, she added, these tests should have been conducted long before a catastrophic spill: “This is a little bit like closing the barn door after the horse is gone.”

On June 17, a reporter asked White House press secretary Robert Gibbs if the administration is “comfortable with the amount of dispersant that is being released into the Gulf” and “with the substance itself,” noting that “a lot of marine biologists that we’ve talked to say that this is a very toxic chemical, that this could actually be more harmful to wildlife in the Gulf than the oil itself.” Gibbs referred to the EPA directive to reduce dispersants by 75 percent—without noting whether BP was abiding by that limit—and said, “I think far and away the most harmful substance that is being emitted into the environment in the Gulf is the oil.” The reporter followed up: “Do you think at the current quantity it’s safe to release that dispersant into the water?” Gibbs replied, yes.

According to Jackson, the real answer is, we don’t truly know. And as the oil continues to gush into the Gulf, the EPA testing that could provide a more definitive answer—and perhaps lead to the use of a safer alternative—remains unfinished.