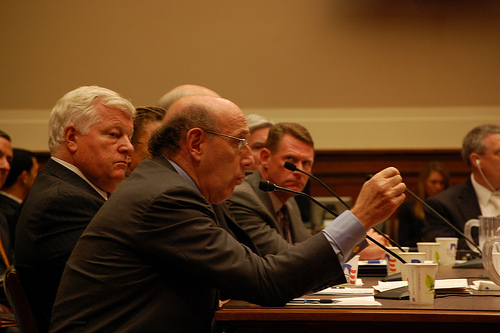 Kenneth Feinberg is used to tough jobs. But his latest task—determining how to dole out the $20 billion BP is putting up to compensate victims of the Gulf oil disaster—might be his most difficult yet.

Feinberg makes his living as a go-to guy for excruciating decisions. The 64-year-old lawyer, a Massachusetts native now in DC, has been tapped to mediate some of the most contentious settlements in recent memory. He handled compensation for Vietnam vets affected by Agent Orange, dispensed $7 billion to 9/11 survivors and relatives through the September 11th Victim Compensation Fund, and administrated the fund established in the wake of the April 2007 Virginia Tech shootings. More recently, he was called upon to determine executive pay for bankers bailed out by US taxpayers.

Yet perhaps even more than with Feinberg’s past jobs, the Gulf spill is punctuated by question marks. How extensive is the true damage? How long will it last? Who qualifies for payments, and how do they prove it?

This final point, says Feinberg, is his biggest challenge at the moment. Since so many shrimpers and fishermen work on a cash basis, they seldom have the tax forms or pay stubs they need to back up their stories. Of the 20,000 personal claims received during the first week, he notes, more than 18,000 were from individuals with “zero, or very, very scarce corroboration.”

Those people will need to find some other way to make their case. “Will your ship captain vouch that you were paid so much per month? Will your priest sign a letter that says he knows you were paid so much?” Feinberg asks claimants. “I’ll bend over backwards to help the individual wage earners in the Gulf who are threatened by the spill; their livelihood was threatened, but I must have something—and everybody understands that.”

Sure enough. Yet Feinberg has caught flak for being overly optimistic by promising to respond to personal compensation claims within 48 hours. Alabama’s Attorney General Tom King has publicly accused him of being a “corporate shill,” based on the fact that BP is paying his salary, and accused him of being “completely tone-deaf to the concerns of people living along the Gulf Coast.”

Individual claims to the BP claims center, Feinberg has stipulated, will be paid out in a matter of days, while business claims should take no more than a week. But the very first batch proved to be a logjam. As of September 8, the center had received a total of 46,056 emergency claims, and fewer than one in four have been greenlighted. ProPublica, which is running its own BP Claims Project, reports that many claimants have complained about long delays, or that the sums they received were far from adequate. Feinberg counters that the facility has 200 people working around the clock in shifts, 24-7, just “to get rid of the backlog that just came in on day one.”

While the center paid out nearly $40 million in the first two weeks, there are still stories like the one about a shrimper who received a check for $300 that was supposed to last her six months. Some hotel and restaurant owners in Florida fear that applications that have been pending for weeks now will be rejected, since the oil never reached their shores. Feinberg has said that proximity to the spill will be a key factor in determining who should be compensated, even though Florida businesses insist fear of oil has kept tourists at bay.

The proximity rule, critics say, will lead to exactly the kind of messy litigation and long-delayed compensation that the fund was designed to thwart. “This kind of arbitrary proximity he’s talking about just doesn’t make sense,” said Brian Barr, a Pensacola attorney representing the Florida Restaurant Lobbying Association.

Long-term claims present a bigger problem. From the end of November, victims have three years to file long-term claims against the company. If they accept a settlement, however, they must waive their right to sue BP—and accept that current predictions about the extent of the damage will hold, even as debate rages in the scientific community about just how bad things might be.

“My biggest fear is that people are under such economic duress that they have to sign a full and final release before such time as they know exactly what the damages will be,” said Gibson Vance, a Montgomery, Alabama-based lawyer and president of the American Association for Justice, which represents trial lawyers. “It’s like a car wreck—and the car is not even through wrecking yet.”

Feinberg admits as much. “It’s a real challenge to try and predict the future,” he says. “It’s a very murky crystal ball.”

But given his line of work, he accepts criticism is an occupational hazard. “You deal with it. It comes with the territory,” he says. He got plenty of it in his administration of the 9/11 fund as well. He spent 33 months conducting 1,500 meetings with victims’ families and survivors himself. But since compensation was determined by the estimated income of a victim over his or her lost lifetime, Feinberg faced outrage from hurt families. “Your offer spits on my wife, spits on my son, on my father-in-law,” Steve Campbell, a New York police officer whose wife died in the World Trade Center, told him in one public meeting.

In the end, though, Feinberg convinced nearly all of the victims and families to participate. He met with them in person to make the case that a settlement would be a better option than litigation. In the process, many changed their mind about Feinberg. One of his harshest critics was Charles Wolf, whose wife, Katherine, died in the North Tower on 9/11. Wolf started a website, FixtheFund.org, where he blasted Feinberg as “patronizing, manipulative and at times, even cruel.” But Feinberg’s attention to the fund’s design and the needs of victims eventually changed Wolf’s mind. He later wrote an open letter to Feinberg: “To have one of your sharpest critics follow through on a promise and not only join the program he was criticizing, but promote it to his peers, says a lot about you and the way you have adjusted both the program and your attitude. Today, I have complete faith in you.”

After his 9/11 work was complete, Feinberg cautioned the government against putting so much responsibility on the shoulders of a single mediator. “Don’t ask one person to act like Solomon and try to calculate the value of lives,” he told the Washingtonian in 2008.”To be judge, jury, accountant, lawyer, rabbi, etcetera, is very, very difficult.”

But now he’s back in the same role, and facing even harsher criticism due to his compensation from BP. He administered the 9/11 and Virginia Tech funds pro bono, but BP has the cash, Feinberg argues, so it’s only fair that it foot the bill. So far, though, he hasn’t followed through on his promise to make the details public. “We don’t want somebody who’s claiming to be independent to take advantage of people and force them into something that’s quick and cheap,” gripes Steve Herman, a New Orleans lawyer who represents some BP claimants, and dismisses Feinberg as a “glorified claims adjuster.”

Another oft-heard concern along the Gulf Coast is whether BP will follow through on its promise to deliver $20 billion for the fund, or more if they’re needed. The company agreed to deposit $5 billion into the escrow fund this year and $1.25 billion every quarter from 2011 through 2013. But watchdog groups have criticized the fund’s set-up for giving BP too much power. The deal was made with BP’s relatively small Gulf subsidiary, BP Exploration & Production Inc., rather than the parent corporation, which is valued at $248.6 billion.

Instead, keeping money in the fund relies on the subsidiary turning a profit on drilling in the Gulf. With lawmakers threating to bar the company from obtaining new leases, the company is using the threat that it might not have the money for the fund to pressure the federal government against meting out harsh penalties. There are also signs that BP intends to pass the liability to its partners in the Deepwater Horizon operation; on Wednesday, BP released its internal report on the April 20 disaster, which pinned much of the blame on the other companies involved in the fiasco.

For his part, Feinberg says he has “no concerns whatsoever” that the oil giant will fulfill its obligation. “BP has said that the $20 billion is in escrow and is available. BP has also stated that if $20 billion is insufficient, it will pay whatever additional financial obligations it may have.”The public criticism is also far down on his list of things to worry about. “You try and adjust style and your approach to the anger,”the lawyer says,”and you get the money out as fast as you can.”