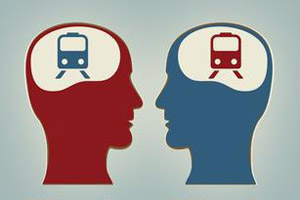 For supporters of public transportation, William Lind, the director of the American Conservative Center for Public Transportation, is a complicated case. On the one hand, he articulates very cogently the reasons that free-market Republicans should vote to fund public transit (you’ll find those reasons in the interview that follows). It’s an unusual position—most Republicans are in the highways camp—and so Lind’s book, Moving Minds: Conservatives and Public Transportation (co-authored by the late Paul Weyrich), has been welcomed by many on the other side of the political fence.

But Lind’s views on race and public transit are where the complications come in. He is vocal in his insistence that mostly white conservatives—”riders by choice” who own cars and could drive if they wanted to—will not ride buses because of the poor, mostly nonwhite people who might be riding alongside them. He is equally insistent that it is not racism to say this, but simply fact-based thinking. It leads him to support rail, including streetcars, but not buses.

You’ll find that stuff in the interview below, too.

Lind says his new organization (which is affiliated with The American Conservative magazine) will be lobbying a presumably increased Republican delegation in Washington after the midterm elections on important upcoming transportation legislation.

Q. What is the basic conservative argument for public transit?

A. The fundamental reason conservatives should support public transportation is because traditionally we’ve been strong on national security. The country’s single greatest national security vulnerability is our dependence on imported oil. For at least half of the American population, that dependence is complete; that is to say only half of the population has any public transit available at all. The first conservative virtue, as Russell Kirk argued, is prudence. It strikes us as wildly imprudent to make our mobility hostage to events in unstable parts of the world.

The second [reason] is that there is a myth that has grown out of the libertarian camp—libertarians and conservatives are often confused, but in fact they’re very different—that somehow public transportation is subsidized and highways are not. Well, that’s nonsense. The latest Federal Highway Administration statistics show that user fees, including the gas tax, only cover 58 percent of the direct costs of highways. That’s not even looking at the vast indirect costs. And many rail—not bus, but rail—public transit systems are able to cover 50 percent and more of their expenses out of the fare box. Of course they’re all built with government money, mostly federal, more federal in the highways than transit. Highways get 80 percent federal; normally transit only gets 50 percent. So the picture that many conservatives have that it’s a matter of free enterprise versus subsidy couldn’t be more wrong.

It couldn’t be more wrong historically either. The reason we now have this dangerous dependence on cars and highways is because, starting in 1916 with the Good Roads Act, government poured tons of money into highways, while it was taxing the competing railways, including streetcars, inter-urbans, and the main railroad companies that ran the passenger trains.

And there are many other arguments, particularly for rail rather than bus transit. The distinction’s a very important one for conservatives. With the exception of a few situations like express buses that run directly from the suburbs to the downtown, very few conservatives, who normally have enough income that they are riders from choice, [will] take a bus. But many riders from choice will take rail, whether it’s streetcar, light rail, heavy rail, commuter rail, or inter-city passenger trains. So rail transit particularly is important for conservatives. It serves them very directly in that even if you’re driving a Mercedes, it’s no fun sitting there stuck in traffic. Americans waste more and more time in traffic. We can’t build our way out of it. It destroys cities to drive limited access highways through them; we have seen that over and over. 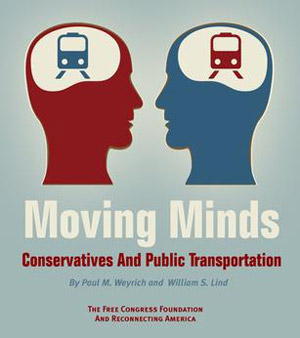 So [it is to us] a bizarre notion that we hear from so many Republican candidates and officeholders, that says public transportation, particularly rail, is somehow left-wing, and if you’re a conservative you want highways. These are not ideological issues. They’re technical issues, and they need to be dealt with as such.

Q.I do think that increasingly it’s become a culture war kind of thing. There’s a perception that transit is favored by the “urban elite,” with all the baggage that goes with that phrase and idea—the intellectual elite, the liberal elite—and that cars are what regular working folks use to get around.

A. Yes, and again, we think that this is largely due to a series of misunderstandings and misperceptions. If you look at the demographics of the people on rail transit—not buses, but rail transit—their income levels, which are much higher than the people riding the bus, suggest that they are very largely conservatives, most of them vote Republican.

From the standpoint of the middle class, the problem with complete car dependence is that cars are very expensive. The average cost total of a car per family per year is about $6,000, which is a lot of money. Where there’s no public transit, or the quality is so poor that nobody who has any alternative will use it, and that’s not infrequently the case, then everybody in the household has to have a car. And pretty soon you’re looking at costs, not just $6,000, but 12, 18, 24, 30,000, with the kids, the wife, everybody having a car. This is a huge bite out of people’s budget at a time when the middle class is under increasing financial pressure.

Q.Let’s talk about the racial issue. People have flat-out called you a racist because of your attitudes toward bus transit, your insistence that white people aren’t comfortable riding public transportation with people of other colors.

A. As a conservative, of course, I reject political correctness, which in fact is cultural Marxism. So my answer to these “-ism” accusations is, we’re not scared of bogeymen, go find somebody else who is. They don’t mean anything to us.

The fact of the matter is, according to federal government statistics, the black rate of violent crime is 12 times the white rate. Not double, not triple, not quadruple! Quadruple times triple. People avoid, particularly, young black males. And a lot of public transit now particularly at school hours is carrying a lot of young people home from school. This is very real problem of disorder on public transit from those inner city kids. The perception among not just whites but Asians and pretty much everybody, that they don’t want to be around young black males, is based on facts, there’s nothing to do with “-isms.” So the fact of the matter is that where public transit is heavily used by minorities, everybody else is going to avoid it. They’re doing so not because they’re dirty, nasty racists, they’re doing so out of self-preservation.

I’ll tell you, I spoke at a conference, I had the black female head of a Midwestern transit system say to me, the problem’s so bad that I would like to start running buses off-peak hours on key routes, where you have to show a senior citizen’s ID to get on, because the senior citizens are afraid to ride the bus, because they’re afraid that the young black kids will hassle them, which, of course, they do. I said, terrific idea, brilliant idea, do it. Well, of course, it never happened, because someone, even though this was a black woman heading the transit system, somebody would’ve screeched “Racism! Racism!”

This is a cultural problem. It’s a reality. If public transit is told it cannot take that reality into account, then its utility is going to be marginal for riders from choice. Because a major reason why people want the private automobile is because it’s private, even when it’s very inconvenient to be stuck in traffic, they say I don’t have to worry about who might sit next to me.

Another thing that’s done in much of the rest of the world—was done, by the way, in the old Soviet Union—is separate first and second class. A lot of Soviet bus and trolley bus lines had separate first and second class buses. The Paris Metro until recently, and they were really stupid to get rid of it, had separate first class cars for the train. As soon as you have a slight extra fare, anybody who’s worried about who they might have to ride with—and in much of the world this is what women do to protect themselves—will pay the relatively small extra fare, because they’ll know they’ll be riding with a class of people where it’s going to be safer. In parts of the world now, you have special cars that are women only, for the same reason. This is simply transit accommodating reality. And it has to accommodate reality in this country just like anywhere else, and if it’s scared away from doing so, because of stinking political correctness, then at a certain point conservatives have to look at it, and say, maybe this isn’t worth our tax money.

Q.In the current political atmosphere, which obviously is polarized to an almost unprecedented extent, how do you see possibilities for the conversation on public transit moving forward?

A. I think the politicians are lagging behind their constituents. Conservatives, Republican officeholders and candidates expect the votes of middle-class, again, generally white people, who increasingly are using public transportation, want better transportation, want transit they actually want to use, as opposed to the usual bus, and find themselves needing it as their economic situation gets worse.

That’s one of the things we try to point out to them, that this isn’t just for someone else, but good public transit is something that the people who vote for them use and want and increasingly need. This kind of political lag, of course, is not uncommon. I am, in the short term, not optimistic, because again a lot of the incoming Republicans will have bought the libertarian line, that transit is subsidized and highways are not. Factually, that couldn’t be more wrong.

This interview was produced by Grist as part of the Climate Desk collaboration.