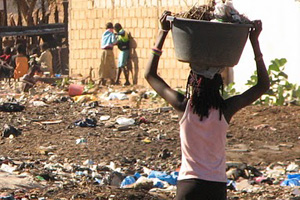 Fred Kyagulanyi and James Sendikwanawa used to get up in the dark to dump bags of rubbish in Kampala‘s suburbs. Trying not to be spotted, they would sneak past the houses of sleeping neighbors and throw the bags on to the roadside or toss them in drains.

“We would wait several days until we had many bags and then make a trip,” Kyagulanyi says. “We were embarrassed, even if nobody was watching us at the time.”

Without a proper waste collection and management system, such nocturnal enterprises are not unusual in Uganda. These days, however, the two men turn rubbish into fuel. The friends have honed a technique to produce what Kyagulanyi calls “non-fossil fuel”, made from refuse such as plastic bottles, polythene bags and organic waste.

Kyagulanyi and Sendikwanawa, who are from Ndegye, a township about 10.5 miles outside the Ugandan capital, were inspired to find a use for rubbish after waking each morning to find piles of garbage thrown by other people.

“We decided that we would try to find a solution to deal with garbage,” says Kyagulanyi. “So we began researching how we could put it to good use.”

The pair had dropped out of school before their final exams, but Sendikwanawa had always had an interest in chemistry. It occurred to him that each year hundreds of thousands of tonnes of waste were piling up in Kampala and around other towns across Uganda and that perhaps he could do something with it all.

The result of their research can be found in a factory, little more than a corrugated iron roof held up with wooden poles. Here they use cement kilns to turn rubbish into fuel.

The men are heroes among the boda boda (motorbike taxi) riders who buy fuel from them at around $1 a litre – half the price of the gas stations. Other customers include local car drivers and the neighborhood video hall manager.

“We have three types of petrol here,” Kyagulanyi explains. “We have ‘super’, we have ‘premium’ and also we have ‘pure’. This is our factory language but in the language of fossil fuels, it can be called unleaded premium or benzene. But ours is very different so we have different names.”

“We use all types of waste from plants, plastic bottles, shoe soles and all different types of organic waste,” Kyagulanyi says. “We use all that waste to make fuel that runs gas engines,” adds Sendikwanawa, who is known as “engineer” in Ndegye Township due to his day job: fixing biogas digesters on pit latrines.

He says they had originally tried turning waste into manure and fertilizers, hoping to sell it to farmers, but found there was little demand. However, with fuel prices soaring they knew they would have an eager market if they could power engines. Kyagulanyi found out about biodiesel during a four-year stint working in Germany. When he returned to Uganda he brought back literature on biodiesel, which inspired Sendikwanawa, who, he says, is the brains behind the project.

The men dry and sort the rubbish then heat it in kilns to produce a crude oil. A catalyst is added to produce different types of fuel. It is a process known as catalytic pyrolysis, in which material is heated at high temperatures in the absence of oxygen. Pyrolysis is the basis of several methods being developed around the world as a means of producing fuel from crops or waste products.

The pair admit there were a few hiccups, but they kept experimenting until they had a breakthrough in early 2009. Now they can process up to 4,400 pounds of garbage a day.

Kyagulanyi and Sendikwanawa have formed Lat Photo Energy Uganda Limited and hope to ramp up production, pointing out there is no shortage of raw material for their fuel.

Kampala’s suburbs are choked with tonnes of uncollected waste, with city officials estimating that each person generates 441 pounds of waste annually. Michael Mudanye, a waste engineer for Kampala council, says the city generates an estimated 3.3 million pounds of garbage a day, three-quarters of which rots uncollected on the streets, or gets thrown into in sewerage outlets and water channels, some of which run into Lake Victoria.

“So far we can only produce 100 litres [about 26 gallons] of fuel a day,” says Kyagulanyi. We hope to increase the production if we get partners to expand our kilns. The challenge is that some people are still doubtful that our fuel works. We are now out to show the nation that we can produce enough fuel for everyone to run their vehicles while cleaning up all the rubbish left lying around the country.”

Uganda’s state minister for energy, Simon Du’janga, said he was aware that some gas and fuel could be obtained from garbage but his message to Kyagulanyi and Sendikwanawa was: “Tell those fellows they should not waste their time. It is a very costly process with very little output.”

However, Lat Photo Energy Uganda appears to be proving him wrong. The company may be small but it’s doing steady business.

Raj Kaakeeto is a boda boda rider and one of Kyagulanyi and Sendikwanawa’s regular customers. He says at first he doubted whether the fuel would work. “One day I had no money yet I needed fuel. So I bought some of their fuel and mixed it with the little that I had in the tank. I was surprised—it worked,” he says. He likes it because it’s a lot cheaper than the regular gas.

Jimmy Lutakome, another resident in the area, testifies that the fuel works well in gas engine generators. He says: “The fuel lasts longer if you mix it with that from the gas stations. I have been saving about 2,000 shillings per day [about 90 cents] compared to the past.”

Kyagulanyi and Sendikwanawa have a grander vision than just providing cheaper fuel for their neighbors. “We thought we should be part of the solution to the global demand for environmentally beneficial practice. And I think we are succeeding,” Sendikwanawa says. “We only need to expand the capacity of our kiln and distilleries and we shall clean up the city of waste.”